La Meri: The undisputed queen of ethnic dance and her Indian connection 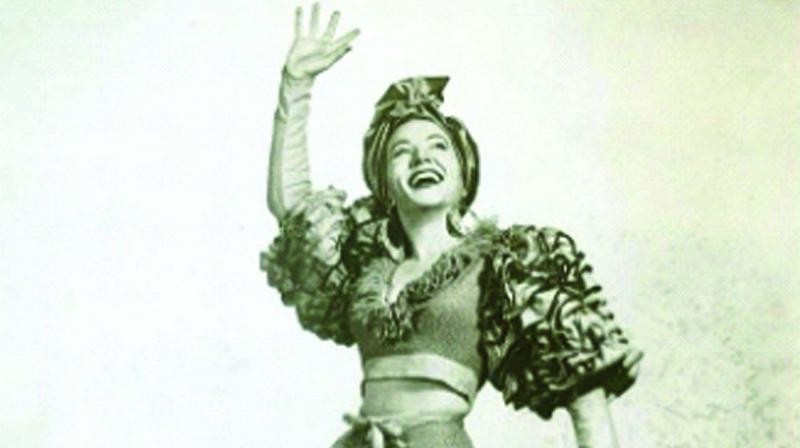 Some of La Meri’s many avatars

During my visit a few years ago to Jacob’s Pillow (Lee, Massachusetts, USA) from New York, the famed school of American dancer who is considered the father of American modern dance, Ted Shawn, I chanced upon the archival material on La Meri, the dancer, teacher, writer and dance ethnologist, who had visited Bengaluru in 1936 and Ram Gopal, the legendary dancer, had joined her company to travel to the far east.

Described as “the undisputed queen of ethnic dance” by Walter Sorrell, the dance writer, La Meri was long considered the leading American authority on the subject, particularly the dances of India and Spain. She toured the world at the height of her career, in the 1920s and 1930s, studying and performing in South and Central America, Europe, Scandinavia, Africa, Australia, New Zealand, Tasmania, India, Burma, Malaya, Java, the Philippines, China, Japan, Ceylon and Hawaii.

The version we get from Ram Gopal’s autobiography Rhythm in the Heavens for Ram Gopal’s parting with La Meri is that when performing in Tokyo, Ram Gopal received more praise in the press for his performance than La Meri and she was very upset. She and the company left him in Tokyo and moved away. Ram Gopal was completely at a loss and one Polish friend gave him support and took him to America. Ram Gopal describes his trials and tribulations in his autobiography and as they say, “the rest is history”.

At Jacob’s Pillow archives I read La Meri’s autobiography Dance out the Answer along with many other details about her amazing life. I also saw a video of her “Hansa Rani”, the Indian version of the Swan Lake ballet with the original music of Tchaikovsky, La Meri donning Indian costumes and using hasta mudras. Indeed she was a remarkable woman and a daring dancer.

After her world tour, on returning to America and settling down in New York, she founded the School of Natya with Ruth St Denis in 1940 in New York, where she taught and performed with her company, the “Five Natyas”, and it presented such guest lecturers as Pearl S. Buck, Coomaraswamy, Lin Yutang, Ted Shawn and Argentinita. Her book Spanish Dancing, published in 1948, was considered by many to be the definitive text on Spanish dance. The earlier book, Gesture Language of Hindu Dance, was published in 1942. It was reprinted in 1964. 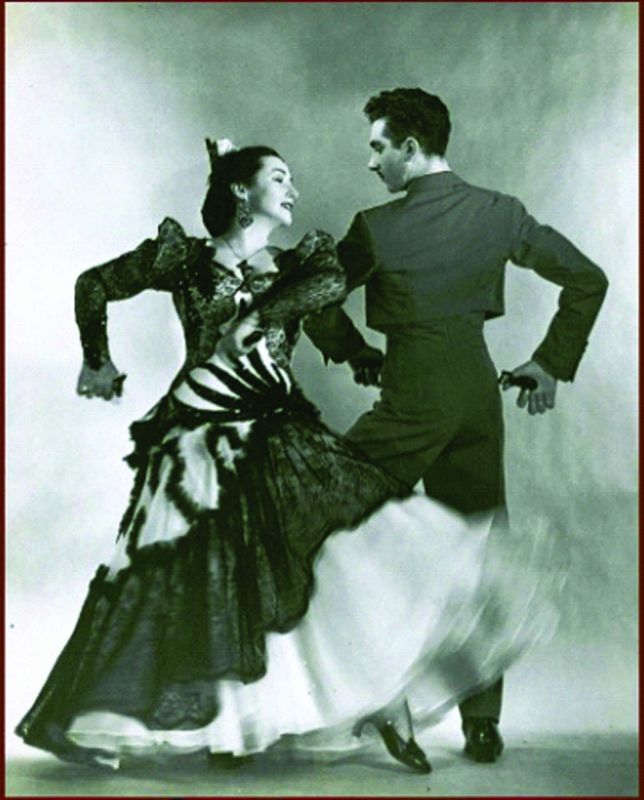 La Meri, whose real name was Russell Meriwether Hughes, was born in Louisville, Kentucky. She received her first dance training in San Antonio, where she studied ballet and Spanish and Mexican dance as a child. She later studied Hawaiian dancing in Hawaii and in New York City, modern dance with Michio Ito and ballet with Aaron Tomaroff and Ivan Tarasoff.

La Meri made her professional stage debut in 1924 in San Antonio, where she danced prologues to silent movies. In New York, she performed with Maria Montero and was a featured vaudeville performer with Keith Time and in the 1949 Broadway revue A Night in Spain.

Her first major work was Krishna Gopala, presented in 1940 with Ruth St Denis and Hadassah as guest artists. I saw an interesting photograph of hers in the group choreography of Krishna Gopala. She also created an interpretation of Swan Lake in the Bharatanatyam school of Indian classical dance and created many dances in the styles of other cultures. She was such a versatile dancer and choreographer that John Martin, the dance critic of the New York Times wrote in one of his reviews in 1940 about her performances as follows: “An afternoon with Ms La Meri is rather like being shown a small corner of some connoisseur’s collection of choreographiana.” 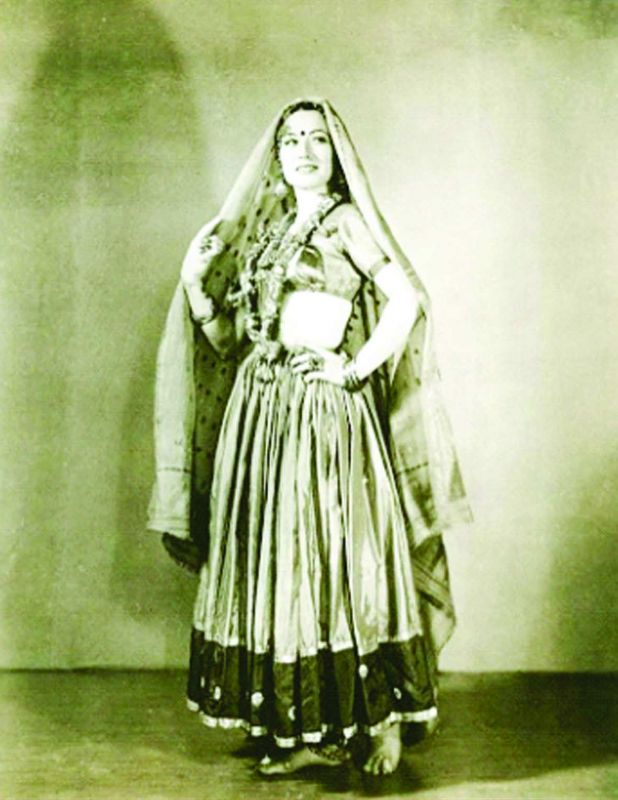 She taught and performed with her own company at the New York School of Natya, which was absorbed into the Ethnologic Dance Centre she founded in 1942. The school continued until 1956 and was an important source of training in ethnic dancing. La Meri taught at universities across America. She also taught and performed at the Jacob’s Pillow Dance Festivals regularly, and taught at the Juilliard School in New York.

On her retirement in 1970, La Meri established Ethnic Dance Arts Inc. in Hyannis, Massachusetts, where she presented an annual ethnic dance festival.

I was surprised to learn that La Meri wrote six volumes of poetry and five books on dance aesthetics, technique and composition. Her extensive collection of material on ethnic dance, given to the New York Public Library in 1948 and 1962, is a major holding of the library’s dance collection.

Some 20 years ago some of La Meri’s dance collection was put on sale. Dr Kapila Vatsyayan, the then member-secretary of the Indira Gandhi National Centre for the Arts (IGNCA) in New Delhi, seized the opportunity to purchase it for the Centre. La Meri was an important figure in the world of dance and had studied Bharatanatyam under Vadivelu Nattuvanar from Papanasam village in South India and she had also studied Kathak while visiting Lucknow. La Meri’s American disciple, one Gina Lali, had also visited India to study Bharatanatyam from Chokkalingam Pillai and later on she studied Kathak under Birju Maharaj. La Meri’s interventions with Indian dance are considered important for dance historians. 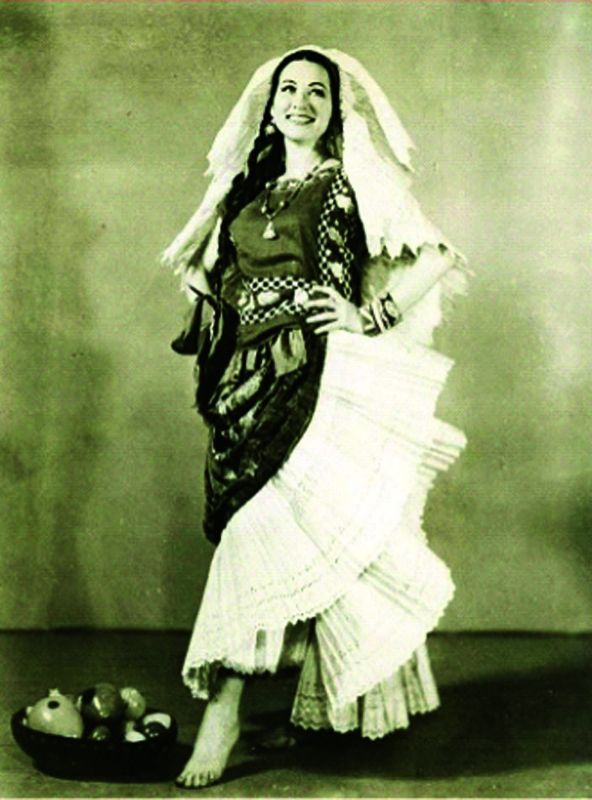 Dr Vatsyayan offered the material on La Meri to write a book to the renowned dancer and choreographer, Usha Venkateswaran ,wife of the diplomat Venkateswaran, who was a former ambassador. She had choreographed a number of dance dramas. Her latest dance drama, Shakuntala, was staged at the “Maximum India Festival” at the Kennedy Centre in Washington D.C. in the year 2014. Her book Life and Times of La Meri published by IGNCA is also a valuable record of La Meri’s life and the creations of Indian dance performances. Usha Venkateswaran notes:

“She was fortunate to see the legendary Devadasi dancers Bhanumati and Varalakshami and persuaded their teacher Papanasam Vadivelu to teach her Bharatanatyam. Not only that but also within three months she danced with Bhanumati and Varalakshmi in Madras. Thereafter she studied Kathak under Ram Dutt Mishra in Lucknow and recorded the music at Kolkata to take with her.”

Some of the dances she created on Indian themes like “Devi Murty”, “Drishya Kavya”, “Krishna Gopal”, “Gauba in Heaven”, “Rigveda Richa”, “Chidambaram Karana” and a few works on “incidents from the life of the Buddha” show deep interest in India and her own creativity. She also choreographed the Bach-Bharata Suite using the Western classical music of Bach but with the classical Bharatanatyam dance patterns for dance. She took five sections from the Bach Suite and interpreted them in Bharatanatyam style. One more production that also needs to be mentioned is that of Shehrezad.

She was drawn to Gurudev Rabindranath Tagore’s work Chitrangada and had choreographed for a performance some incidents from it in New York in 1946. Her range of creativity was amazing.

Though negative but still full of admiration, Ram Gopal in his autobiography writes: “It was an exciting lesson to watch La Meri put on make-up or should I say change her face with the flick of an eye-brow pencil and lipstick to suit the numerous characters she attempted to portray. I thought how intelligently and swiftly she changed .She was a Hula dancer one moment, then Spanish the next, and quickly changed to the Russian ballet technique. Now she appeared as a Mexican doing Jarabe Tapatio dancing on the brim of her hat, then she was a Nijinsky faun, a Marwari Nautch woman, a Burmese belle, a Javanese princess, the spirit of a lake... There was something very entertaining and clever in what she did and with every ounce of conviction and sincerity she was capable of.”

Her activities are well recorded and are preserved in major institutions for scholars to study. She died at the age of 89, on January 1988 at San Antonio, USA.