Giving a wing to fly

Through the initiative Aahan–Vaahan, a group of 50 lawyers pitched in to airlift guest workers from Mumbai to reunite with their families 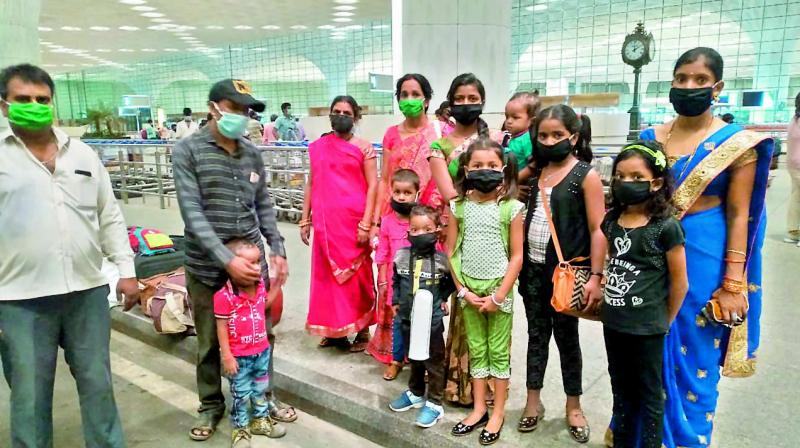 At a turbulent time when the public representatives and governments have evinced no empathy for stranded, starving citizens, NLSIU alumni’s gesture could be considered a revelation.

The plight of migrant labours during the COVID-19 lockdown seems to have struck at the heart of the alumni of the Class of 2000 of Bengaluru’s prestigious National Law School of India University (NLSIU).

In a first-of-its-kind initiative, called Aahan–Vaahan, a group of fifty young lawyers pitched in to airlift migrants labour from Mumbai to reunite with their families in their respective villages all across the country. Their first flight took off the Mumbai tarmacs on the May 28; there are more flights coming up.

First there was one, and then 10

So far, Aahan–Vaahan has supported four flights containing guest workers to take off from Mumbai and Bengaluru, including two flights from Mumbai to Ranchi, carrying over 350 labourers, and one from Mumbai to Bhubaneshwar and another from Bengaluru to Raipur, carrying 180 guest workers each.
While the NLSIU alumni funded the first flight, their relief efforts inspired Godrej to sponsor the second flight. The humanitarian act soon grew contagious — the parents association for students of Ascend International School bankrolling the third flight. Ajay Bahl, Managing Partner of AZB & Partners, came forward to pay for the fourth flight.

The good word soon spread, bringing in many more contributors to the scene. “Initially, we just thought of having only one charter flight,” an ecstatic Ashwin tells us. “But as the message spread across, we started receiving many more contributions, and hence we decided to have 10 flights in the next three weeks.”

Unified for a cause

Group members facilitate from various cities such as Mumbai, Bengaluru, Singapore, Delhi, etc., via mobiles and Zoom and other video-conferencing apps. Knowing each other well also seemingly helped the group members deliver quickly.

Suhaan Mukerji, an alumni and a public policy lawyer from Delhi, tells us how everyone in the team works to their strengths without letting ego come in the way. “It is the coordinated effort and collective strength of all volunteers that has made this possible,” explains Suhaan. “It’s like a community of Indians coming together to help fellow Indians. There is a core group team, which has later expanded as other volunteers came in.

Talking to us on why the group chose to evacuate the guest workers by air, Ashwin Ramanathan, a practising lawyer in Mumbai and a member of the group, points out that it seemed to be the best option. “We decided to go ahead with flights because to begin with, we realised there wasn’t much difference in the fares of buses and flights,” he adds.

From support to winning trust

For the air evacuation, the governments of the respective states had to be ready. So, the need of the hour was to liaison with the respective officials. But that was hardly the challenge that awaited the group. “The bigger challenge was that the migrants did not believe us initially,” reveals Talha Salaria, a corporate lawyer with Aahan–Vaahan. “They’d ask for us to show them the air tickets first, all so that they could believe us.”

Another major task was to identify the migrants. “Disseminating information, finding out whether they have proper documents (such as Aadhar card), installing Aarogya Setu App on their phones, ensuring that their journey was comfortable, coordinating with flight carriers and organising transportation for them, was all demanding,” adds Talha.
Yet, despite the trouble, there seem to be no regrets, as Talha lauds the state governments for being as forthcoming as they were in this endeavour.

The objective of the exercise is not only to air transport the migrants, but also to ensure that there’s the last-mile connectivity. In fact, one of the most vital aspects of their initiative was that the migrants be transported safely and with dignity.

“After listening to their heart-breaking stories, we felt it was imperative that their faith in humanity is resorted,” shares Priyanka Roy, a practicing lawyer in Mumbai and an NLSU alumni who’s also a part of the Aahan–Vaahan initiative.
To ensure this, various district-level teams personally oversaw the migrants’ return home.

“We can easily fund a bus, but it goes out of sight the moment it departs. However, the satisfaction we get upon personally seeing them go home was beyond words. Once they reach their homes, some of the passengers called us to say ‘thank you’,” adds Priyanka, beaming at the sense of fulfilment amid the pressing times.

Vital lessons for the taking

At a turbulent time when the public representatives and governments have evinced no empathy for stranded, starving citizens, NLSIU alumni’s gesture could be considered a revelation.

Swathi Seshadri, a researcher in social sciences, and a member of a trade union in Bengaluru, is not as soft on the administration as perhaps Talha is.

“It is time the Government gets its act right. The NLSIU alumni are doing what citizens expect the Government to do,” Swathi says it as it is, also hoping that the whole situation also changes the way the privileged view the working class.