Rhythm divine: The 12-year-old whose bhajans broke the internet

But Soorya, as she is affectionately known, is a star in her own right, with her powerful, astonishingly mature voice. 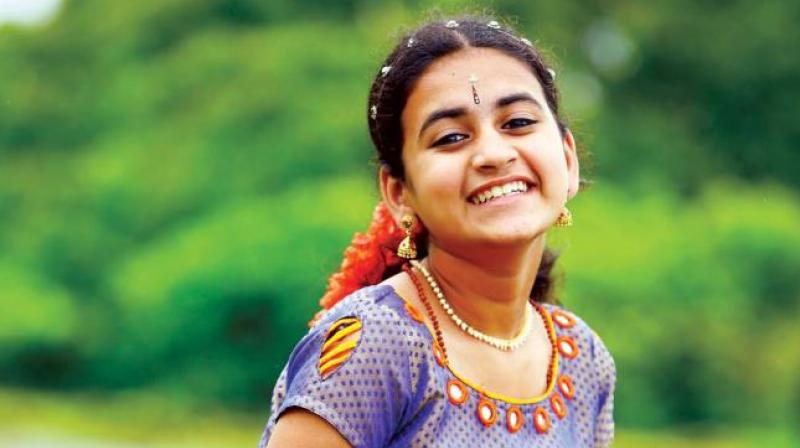 “Soorya Gayathri is here.” “Did you know, Soorya Gayathri is singing?” “Will she sing the Hanuman Chalisa?” Whispers ripple through the crowd at Chowdiah Memorial Hall on October 4. 12-years-old and seemingly oblivious to her sea of reverent fans, Soorya Gayathri is already touted, even in the rigid Carnatic music circles, as being the next M.S. Subbulakshmi. But Soorya, as she is affectionately known, is a star in her own right, with her powerful, astonishingly mature voice. In this, her first interview, Soorya lapses back into the child that she is, a pre-teen grappling with fame she still does not understand, as she tells Darshana Ramdev about her teachers, her school, her friends and her meteoric rise as a singer.

The musicians set up quietly in the background, taking the better part of an hour to set up. It’s 8.30 p.m. and Soorya, the star attraction, has been saved for last. The audience begins to shuffle, even though famed danseuse Vani Ganapathi had just exited the stage, to thunderous applause, but then, they have been waiting for a long time. Waiting to hear Soorya Gayathri. Silence falls quickly as the shruti box begins to hum and a diminutive figure, clad in orange, her hair tightly braided and coiled with flowers, scampers onto the stage, sitting cross legged in the center. The first strains of the Ganesha Pancharathnam fill the air and Soorya Gayathri begins to sing. And we understand, in that moment, why she is such a sensation, why millions of people around the world refer to her with so much reverence.

It all began three years ago, when a video appeared on Youtube. A musician named Kuldeep Pai had directed and produced a new video - it wasn’t a particularly exception contribution in many ways, shot in a studio, the two musicians singing with headphones on. It was a recording of Ganesha Pancharatnam, also not a particularly unusual choice of song. Then the young, smiling girl opens her mouth to sing and all else becomes superfluous. The powerful, unusually mature voice captured millions of hearts, garnering 20 million views on Youtube. Her mentor, Kuldeep M. Pai, or “Kuldeep anna,” joins in - he has, over the last three years, had Soorya Gayathri’s fame rub off onto himself, too. This video has gathered over 20 million views, a conservative tally of her massive fan base. The Hanuman Chalisa, also released three years ago, when Soorya first started performing, became an even bigger hit, with over 27 million views. All this from a young girl, born into a modest home in Kozhikode, Kerala.

Now, snacks are always kept at hand, for the family has grown accustomed to the constant stream of fans who trickle in to pay their respects. “We’re the ones who entertain them,” says her mother, Divya. Their home is remote but her fans don’t flinch, happy to make the trip just for a glimpse of the little prodigy, perhaps even hear her sing. “She sings and then runs off to play, she doesn’t really understand what is happening,” her mother smiles. Her schedule, aside from school, is peppered with appointments: recordings, videos, performances. She arrives in Bengaluru on the day of her show and departs the morning after. This interview with Deccan Chronicle, her very first, is done in fragments over two hours, slipping into the few gaps in her schedule, conducted mainly over crackling phone lines and dodgy signal.

“Soorya...” Her mother’s voice trails off and the slightly hoarse tenor of the 12-year-old chimes into the phone. “You sing like an angel:” Soorya is used to people gushing, taking their unabashed awe in her stride, with admirable modesty. “Thank you,” she giggles. Being likened to M.S. makes her very happy,  “She is my favourite singer,” she says. Outside of her performance space, Soorya is a child once more, dealing with the many ups and downs of fame as well as the trials that accompany one’s advent into teenage. And fame is a phenomenon she has only just begun to comprehend. “She is beginning to understand it now,” says her mother, Divya, who accompanies her daughter to all her various recordings and performances. “All this time, it hadn’t sunk in.” Divya describes her as a serious child, “unlike other 12 year olds, who are just  beginning to discover new experiences.” To Soorya,  there is only music. “We ensure that she has a respite, she goes to school, she has friends who spend time with her, but really, her only interest seems to be music.”

She began learning music at the age of five, from “Nishant sir,” a friend of her father. Growing up in a musically inclined household, Soorya’s talent for music became visible very early on. “Her teachers in school spotted it first,” says her mother, for Soorya, a five-year-old at the time, was wont to burst into song now and then, classroom proceedings notwithstanding! “Her teacher told us that she loves to sing, that she has a talent for it.” And at the age of five, Soorya found her first teacher.

“I learning varnas and keerthanas now,” she says, rather matter-of-factly. She has two teachers apart from Nishant, there’s also Anandi and her mentor, Kuldeep Pai. “Kuldeep anna is in Chennai, he does my recordings,” she says. With Kuldeep’s help, she learns songs in Sanskrit - “I understand some but not all,” she admits. No audience can discern this for she sings with so much conviction, pouring her soul into every syllable. A song begins to play in the background, for Soorya is already at work at the studio in Chennai and she raises her voice over the melody as she explains. “I practice two or three hours a day now, including school,” she says.

Soorya attends a new school now, one she joined a few months ago. Here, teachers and students are less aware of her popularity, it’s a new experience for someone like her. “I don’t have so many friends,” she says, her voice suddenly more child like. Why not? “They don’t know me,” she responds. This is because Soorya doesn’t rush to take center stage at school, or take part in competitions. She has understood, somehow, the divinity in her calling and is determined not to taint it by competing. “I already perform, I already record. I don’t see the need to compete in school also,” she says.

One learns quickly that Soorya cannot be pressed too much for answers, the events that have catapulted her too fame are too tremendous for her to fully understand. “I like being famous,” she agrees. “It’s fun.” What fascinates her about bhajans? “I sing bhajans because they are divine.” What is divinity, exactly? One has her there, for simply laughs in response, saying, “I don’t know how to explain that.” She doesn’t need to.

Still, a certain gravitas returns to her tone as she says, “I like to draw, too but music means so much more to me. I will learn Carnatic music for the rest of my life,” she adds, as she hands the phone back to her mother, clearly relieved to escape the sudden glare of the spotlight, happy to return to her music.