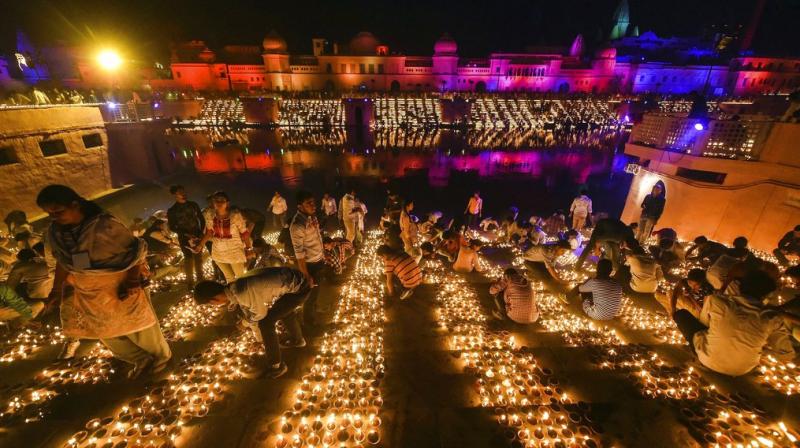 Ayodhya: The northern Indian city of Ayodhya broke a Guinness World Record on Tuesday by lighting 300,150 earthen lamps and keeping them burning for at least 45 minutes on the banks of the river Saryu as part of the annual celebration of Diwali, the Hindu festival of lights.

Her presence was significant because of a Korean legend that a princess from Ayodhya traveled to Korea and married a king, becoming a Korean queen in the year 48 AD.

Yogi Adityanath, chief minister of the state of Uttar Pradesh, was given a certificate certifying the record by Guinness officials who had monitored the attempt with drone cameras.

As dusk fell in Ayodhya, where Hindus believe the god Lord Ram was born and where he returned after 14 years in exile, volunteers lit lamps, called diyas, snaking along the river, through lanes and at houses.

A similar attempt failed to break the record last year, when strong winds blew over many of the lamps. Tuesday's feat broke a record from 2016, when 150,009 lamps were lit.

Purnima Shukla, a Saket Degree College student, was among 5,000 volunteers involved in the ceremony.

"Last time we missed it by a whisper but this time we ensured that all the lamps were aglow. Oil was poured frequently, and we used sheets to block wind where it was very windy," she said.