Covering the grasslands of Masai Mara, wild forests of Tanzania and desert of Kutch, she has been on more than nine trips in the past six years. 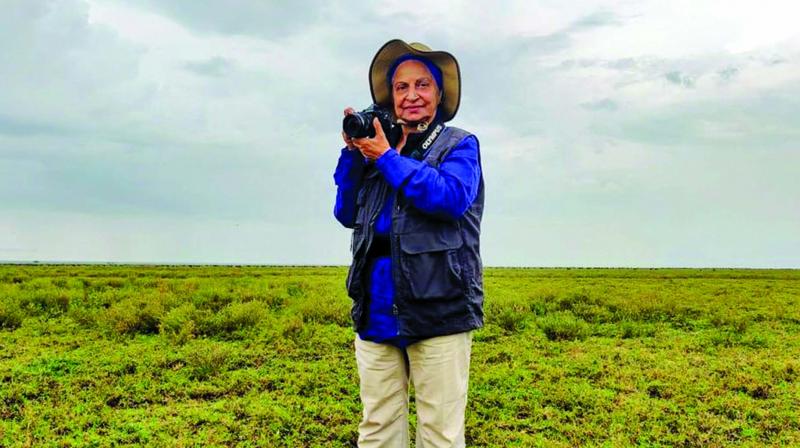 With her poised personality, expressive eyes and unmatched acting skills, Waheeda Rehman always found herself facing the camera. Working on films after films since her teenage years, the actress won the hearts of millions of people in the country. Despite being one of the most sought after actors of the country, Waheeda’s deep passion for photography remained unfulfilled till she turned 70. “Throughout my career, I was behind my small camera and in front of the big camera,” remembers Waheeda, who talks about her first experience of messing around with a camera, clicking whatever she fancied. “I was very fond of photography but never learnt it seriously, it was like a hobby. In those days, there used to be a small box type Roliflex camera.  I used to click random images and would keep reading a little literature on what to do and what not to do.”

At the peak of her career, Waheeda would act in at least three films a year, making it difficult to take out time for her passion. A fan of acclaimed photographer Raghu Rai, she always dreamt of embarking on a tour with him. “I wanted to go with Mr Raghu Rai, but at that time, I was very busy and everyone said, ‘Bechare unki shoot aap kharab karoge (you’ll ruin his shoot),’ so I just kept quiet,” says the actress.

Years later, when her son Sohail got to know about photographer Himanshu Seth’s photo safari, he immediately coaxed his mother into joining it. “He said, ‘mom you always wanted to do this and it’s a great opportunity’,” says Waheeda who first went on a trip back in 2013. “It’s kind of an addiction for me now.

If I had started this twenty years back, I would do this every two months,” she laughs.

Covering the grasslands of Masai Mara, wild forests of Tanzania and desert of Kutch, she has been on more than nine trips in the past six years. Sharing her experience of clicking wildlife in Masai Mara, an elated Waheeda recalls, “You come out of your tent and see all the possible animals, because it’s a grassland. Just a few feet outside the tent, you can see lions, giraffes, and zebras. Sometimes, when we’re having lunch in the garden, there would be a herd of elephants, slowly walking around.” Not just animals, the veteran actress also loves to be surrounded by nature, and if her eyes fall on a tree that intrigues her, she would stop the jeep to click pictures.

But wildlife photography is not all about fun and games and also entails some scary encounters. Sharing one such story, the actress reveals, “There were 17 lions, lionesses and their little cubs. Then, one lioness stood up and came near the jeep and looked up. For a second, I was thinking whether to click her or not, but she was too near and went out of focus. I was hoping she doesn’t say hello to me by jumping on me,” the actress laughs.

Photography has always been close to Waheeda’s heart, so much so, that her husband gave her a camera during their honeymoon. “After I got married, we went to America for our honeymoon, my husband asked, ‘I want to give you something, what do you want?’, I asked for a camera. So he got me a Pentax, I used that for a very long time.”

As an actress who ventured into a new path at an age most people enjoy their retirement, Waheeda feels that there is no age limit for learning. “I don’t like people saying, ‘abhi iss umar me kya karna hai?’” Recalling a recent anecdote from her life, the actress says, “Once Twinkle Khanna was interviewing me for a website or something, so she asked ‘what is your bucket list’, I said scuba diving, and she asked, ‘at this age!’. I said her what age has got to do with that.  If I am healthy, I can do it.”

A part of the group photography exhibition titled Meraki, Waheeda would be exhibiting her clicks for the first time. Although she was nervous at first, her friends managed to convince her. “my friends Asha[Parekh] and Helen said ‘You must have an exhibition,’ and I said, ‘I don’t have that many great photos to have a solo exhibition, I’m still learning.’” says the actress, who later agreed to be part of the group exhibition.