Application of accused asking for custody of horses rejected by court; however, they were allowed to take back carts. 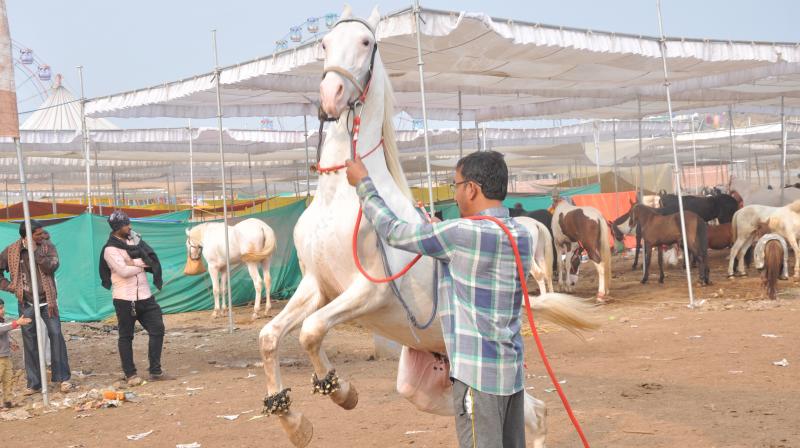 PETA's intervention application included health assessment reports by a team of two government veterinarians from the Maharashtra Animal Husbandry Department who examined the horses and found that they suffered from malnourishment. (Representational Image)

Mumbai: During a hearing on 8 January, the Ld. Metropolitan Magistrate Court, Andheri, awarded to People for the Ethical Treatment of Animals (PETA) India interim custody of five horses that were rescued by police after being used in an illegal race.

The application of the accused asking for the custody of the horses was rejected by the court; however, they were allowed to take the carts.

PETA's intervention application included health assessment reports by a team of two government veterinarians from the Maharashtra Animal Husbandry Department who examined the horses and found that they suffered from malnourishment, wounds all over their bodies, and inflamed tendons, ligaments, and joints, among other poor health conditions.

The veterinarians stated that if the horses are put back to work, their painful conditions will likely worsen to the point of permanent disability. Now that PETA has obtained custody of the horses, it will secure housing for them at a sanctuary in Sangli where they can receive veterinary care and live free and untied.

Speaking about the verdict, PETA Indian legal associate Bhumika Aggarwal said, “From protruding ribs to wounds from beatings, whippings, falls on hard pavement and more, these horses' ravaged bodies reveal the extent of their mistreatment.”

She went on to add, PETA India looks forward to seeing them receiving proper care at a spacious sanctuary where they'll never be forced to pull carts or race again.”

The horses entered police custody on 26 December after the police officials intercepted the horse-drawn carts which were reportedly racing along the Western Express Highway at Vile Parle East, booking their handlers for rash and negligent driving on the highway and for treating the animals cruelly and endangering the lives of both motorists and animals.

Police took the horses to the cattle pound managed by Brihanmumbai Municipal Corporation (BMC) in Malad, and the next day, one of the horses was found dead, and the post-mortem revealed that the animal had died of suffocation or asphyxia because the rope tied to the animal's neck was too tight.

On 3 January, the court granted permission for PETA to step in to temporarily provide the horses with medical aid, food, and safe housing.

PETA pointed out in its application that the suspects who were granted bail on 28 December, violated the High Court of Rajasthan at Jodhpur's 2016 ban on tonga races and the High Court of Bombay's 2015 judgment that having horses in Mumbai is illegal, as none of the stables are licensed by the BMC.

PETA has called on the Commissioner of the BMC and the Police Commissioner of Mumbai to enforce the High Court of Bombay's 2015 judgment and has offered to accept and rehabilitate any horses that are seized as a result.

PETA also urged the BMC to implement the rehabilitation scheme for horse carriage owners and drivers as approved by the Maharashtra State government.