Holi is a festival that has more to it than just colourful celebrations — it indicates transition of season as well as thought. 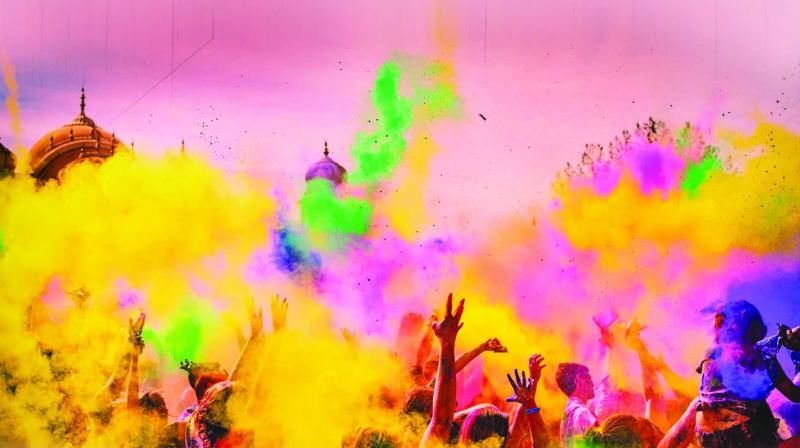 Celebrate the colour of festival by diminishing the internal grid by surrendering self to the divine Holika fire.

In spite of being such a colorful festival, there are several features of Holi which makes it so vital for human life. However, they might not be so apparent but a closer look and a little thought will reveal the meaning of Holi in more ways than meets the eye. There are socio-cultural, religious and organic reasons why we must enjoy the festival and cherish the reasons for its celebrations.

So when it’s time to celebrate Holi, please don’t hold yourself back and enjoy the festival by participating in every small tradition related to the festival.

Holi, the festival of colours, heralds the end of winter and the arrival of spring. Holi is also an example of the conquest of basic human nature and is a celebration of this conquest. The fire of Holi in Hindu mythology implies the conquest of envy by Shiva. This is the reason, that in Hindu mythology Shiva is also known by the names Kameswara or Madana Ripu which means one who has conquered all human desires.

On Holi we all remember the life of a pure devotee, Prahlad and keep his spiritual ideas alive. In some parts, it is celebrated as the day of Kaama dahan, which indicates burning of  desires.

Ideally Holi preparation should start from Maha Shivratri, which is generally celebrated a couple of weeks before or just before Holi.

Holi is not simply about getting rid of the waste and negative from our lives and homes. Holi is much more than that. In Indian mythology, it is mentioned that people used to allocate the time between Holi and Diwali for achieving and setting their goals and aims, it so obvious that around this time people start working on their shortcomings and weaknesses. In a short, Holi is a day to initiate, when you accept your mistakes and accordingly, take stock of them and promise not to repeat them. Holi is not just carelessly hurling of colours at others or creating annoyance, as many do. It is about uprooting the negativity from life.

Legends linked with the festival of Holi

There are numerous legends linked with the festival of Holi, the most prominent one is Bhakta Prahalad and his cruel yet blessed father Hiranya Kashyap and aunt Holika. This mythological legend goes to re-link the endless faith in God.

According to Vedas, Dahan Kriya or the act of the putting sins to fire, should be performed on the day of Holi. During  Dahan Kriya it is said that, some holy mantras, which are mentioned in the Rig Veda should be recited. This ceremony can help us remove negativity and safeguard us from ominous effects. The fire of Holika must be worshiped with essential elements, and the Pooja should be performed with a Bhaav of surrender, a pure emotion.

Another legend associated with Holi, as per the Puranas, is Lord Shiva. In Puranas it is said that Lord Shiva got furious, opened his third eye and cremated Kaamdev, the Lord of Desire, which is figurative gesture of getting rid of carnal desires. From the eighth day of the Falgun Shukla Paksha to the Full Moon Day, which is Purnima, are celebrated as ‘Holashtak’. As per the Puranas, it is said that no holy rituals are performed and no auspicious ceremonies are undertaken during these eight days.

Another belief is that the one who worships Lord Krishna with full devotion on the Full Moon day of the Falgun month will go to heaven. This is the reason why people celebrate Holi with Abir-Gulal traditionally.

Apart from the mythological significance, the tradition of celebrating Holi also includes turning enemies into friends and forgetting the feelings of hardship.

The festival of Holi is substantial for our lives in many other ways than providing joy and fun. Holi comes at a time of the year when people have a tendency to feel lazy. It is very natural for the body to experience some laziness due to the seasonal change. The response to this tardiness of the body is that people tend to sing or speak loudly. Holi is the festival which comes between this organic change when human mind, body and soul is ready to rejuvenate with the spring.

The scientific reason for celebrating Holi includes the growth of bacteria in the environment as well as the body. When Holika is burnt, temperature rises to a high note, followed by Parikrima or circulation  around the fire. This activity kills the bacteria and cleanses the body.

Celebrate this Holi in a decent way with colours of respect and love for everyone as festivals also rejuvenate our relations. The real spirit of any festival is to respect every soul with love.

The writer is an alternative medicine practitioner.