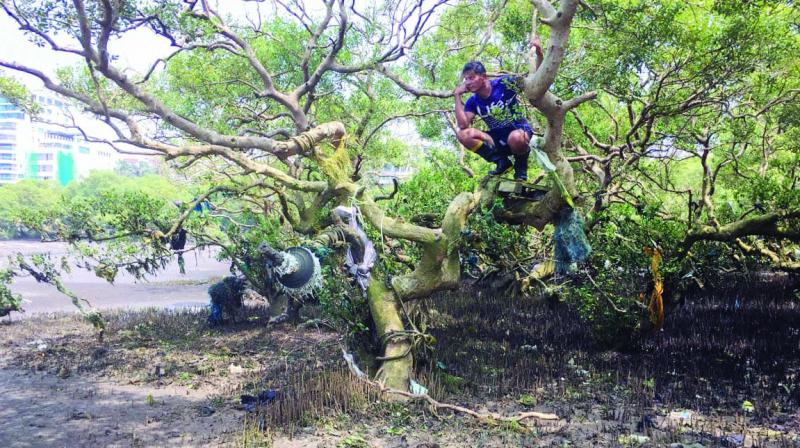 Even coastal dwellers, like the Koli community, native to these shores, have not evolved to keep up with city.

For the last few months, regulars on the promenade will have noticed two things. There used to be a subtle temperature drop accompanied by an unmistakable acridity in the air in one particular curve of the corniche for years. It has disappeared. And a man, weathered, eyes twinkling, gum-boots up to his knees has appeared in its stead. You spot him now and then, between the winding trunks of the mangroves, putting up signs imploring you to save the mangroves or speaking animatedly with passers-by. His name is Rehan Merchant. And he’s quite a chap.

He rolls up dragging a home-made looking wheelbarrow behind him. He nods in approval at my wellies as he goes over the low promenade wall. “Come on,” I hear him shoot over his shoulder, and we step down into the mangroves.

The area just beyond the wall is surprisingly dry and clean. Rehan points to a large sewage pipe that has a thin stream of grey water running from it. On either side of the pipe, mismatched planks have been hewn together to support a sand bank that rises a few feet on the right.  To the left, it is lower. A tree trunk, probably weighing tons, forms a part of the bank. “You built this entire thing on your own?” I ask. “Well, the tide helped,” he says with a shrug.

The next 20 minutes go by in a blur. This construction uses the tides to bring in sand and keep the channels clear so the sewage can flow out. Rehan is animated, intimate with his knowledge of the tides, the force of the monsoon, the way the power of each wave can be channelled. He explains the torque of an eddy that helped move that giant tree right into position. His passion for what he is doing is almost overwhelming – his voice arches and, like the ocean, he moves constantly, never still, his arms and face emphasising his words, he crouches, reaches out, walks briskly here and there. I find it hard to keep him in my line of sight.

He is also hilarious. He shows me the things the tide brings in: rocks, construction debris, and junk (that used to block the ebb, resulting in a stagnant pool of sewage). There’s a small chest with spare gumboots, some tools, a lost teddy bear, a huge buoy, what looks like an anchor… “What are these things?” I ask. “You from Bandra?” he double-checks. When I nod, he grins. “Then they’re your grandfadder’s brinjals, men,” he retorts in an authentic Bandra patois.

Rehan is a proper Bandra boy, and when he came back from the UAE a few years ago, he realised the ocean off Carter Road he used to swim in was inaccessible because of the pooling sewage. So he decided to do something about it.

“Growing up, I thought, I’d either be a prophet or an inventor,” he says with a smile as he gestures at me to follow him deeper into the mangroves. “Whether it’s Jesus, Ram, or Mohammed, or Newton, Einstein, Edison – I look up to ‘doers’.”

The first thing he did invent though, as a teen, was a telescope that looked like a microscope with a singular purpose. “It sounds bad now,” he admits, “but I fell in love with this pretty little girl who lived in the building next door and I needed to spy on her without my mother finding out.” It helps that they grew up and got married.

As we walk in, Rehan scoffs at my reticence – the aerial roots of the trees are daunting, I’m still expecting sewage, and in the distance, I see large, brightly coloured things scuttling. But again, it is clean, the forest sucks up the roar of the traffic, and the temperature drops a few degrees. The scuttling things turn out to be crabs.

In 2005, the Bombay High Court, citing India’s Forest Conservation Act of 1980 and the Coastal Regulation Zone Notification of 1991, ruled to prevent destruction of the mangroves. This included 1690 hectares at the end of Thane Creek, which is now a protected flamingo sanctuary home to 10 mangrove species and over 200 species of birds. Not only do they regulate temperatures and floodwaters, but mangroves are also usually home to a myriad species of flora and fauna and absorb eight times as much carbon dioxide from the atmosphere than any other ecosystem. There are varying reports about mangrove cover increasing over the last 20 years or being decimated by the builder-politician nexus, but the fact remains that mangroves, like forests, will always be under threat from the minotaur that is “development” in this space-starved city.

Carter Road has fared well though. Rehan says the mangroves here weren’t always as abundant. Twenty years ago, when the Chinese ship Zheng Dong washed up on Carter Road and was left there while authorities dithered over what to do with it, the currents on the shore changed, easing the battering of nascent mangrove saplings by the tides. The forest grew up quickly. “You can call it a Chinese conspiracy,” Rehan says with a chuckle.

Still, every day is a struggle. Even coastal dwellers, like the Koli fishing community who are native to these shores, have not evolved to keep up with the city. Their traditional fishing pools, meant to trap crabs and fish, used to fill up instead with sewage. Rehan said he personally interlinked every pool so now fresh water pours in and out. He mentions other problems, like locals leaving offal into the waters to attract crabs, natural scavengers, that would rot and smell. And there was also the problem of human remains, he says, brought in from the nearby crematorium. “They’d put some weird talisman stuff up and the idea was to scare people away from the mangroves,” he says. “That they’d think there was some black magic going on.”

We walk out onto a wide, clean, empty, sandy beach. A heron skips across followed by not fewer than seven chicks. Clear pools of water sparkle. It is breathtaking. Rehan puts his hands in one and washes his face with the water to make a point.

He explains how the sand in the beach was being eroded because the eddy of each wave that went over rocks created ditches. So for the last five years, he has, single-handedly, moved and broken rocks to level the beach. More sand has come in, to stay. And with the sewage no longer pooling, the water is clean enough to swim in.

“Look at my whale,” he says excitedly, and I cannot believe my eyes. It is a stone whale he has built with literally tons of massive rocks. He playacts moving the massive rocks with the help of the tide, groaning, “Yer granmudder’s aolas” and is unable to hide how pleased he is with the way it is all taking shape.

“I imagined I’d be able to dive off, like this,” he says, posing. He shows me around. “This is where I chill when the tide comes in, and this is where I keep my things because it is higher than the tide.”

We have been in the groves for nearly two hours, and his enthusiasm is intact. There is much more to be seen and talked about, but it is time to finish for today. The tide is coming in, and I worry about getting stuck. Rehan laughs as he shows me a tiny machan, high in a tree, where he sits on days he must wait the tide out. But never because he’s miscalculated the timing of the waves. Only because he wanted more time in the ocean.

We walk back to the promenade. The heat and traffic close in. Rehan takes his signs out of his wheelbarrow and puts them up. He lights up a clove cigarette and I ask him if his family thinks he’s crazy. He grins. “Maybe. But my mother says, keep walking, the caravan will show up, to follow.”

Somewhere between ecologist, prophet, and inventor, perhaps part dryad part naiad, this Bandra boy changed an entire beach with his brain and his bare hands. He says he only did it because he wanted to swim.