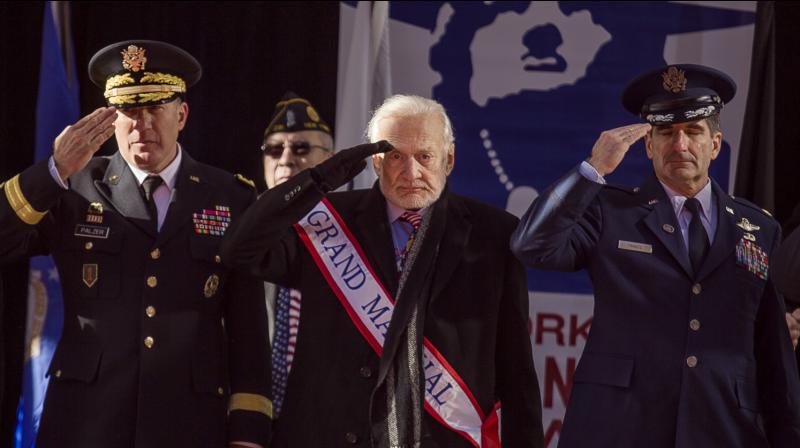 The Institute of BioAcoustic Biology conducted an analysis of the astronauts' voice patterns as they spoke about their encounters. (Photo: AP)

Apollo 11 astronaut Buzz Aldrin has reportedly passed a lie detector test after recalling his apparent encounter with alien life during the historic 1969 mission to the moon. Aldrin, 88, was a part of the test that also analyzed interviews from astronauts Al Worden, Edgar Mitchell and Gordon Cooper.

According to reports, recorded interviews of the astronauts were tested using the latest technology at the Institute of BioAcoustic Biology in Albany, Ohio.

According to the Daily Star, experts claim their results prove they were 'completely convinced' that their claims of aliens were genuine.

Aldrin has always maintained he spotted a UFO on the way to the moon.

'There was something out there that was close enough to be observed, sort of L-shaped,' Aldrin, who is the second human to set foot on the moon, recalled.

The Institute of BioAcoustic Biology conducted an analysis of the astronauts' voice patterns as they spoke about their encounters.

BioAcoustic's Sharry Edwards told the Daily Star that their tests revealed Aldrin is sure he saw the UFO even though his logical mind 'cannot explain it'.

This was not the only time, however. last year, Apollo 15 pilot Al Worden, 86, told Good Morning Britain that he saw extra-terrestrials during his mission.

Voice recordings of NASA astronauts Edgar Mitchell and Gordon Cooper, who are both deceased, were also analysed.

In a 2009 interview, Mitchell, who was a part of the Apollo 14 mission, claimed he saw multiple UFOs.

According to the report by the Daily Star, the tests revealed that Cooper and Mitchell believed they were telling the truth.

The technology is still top-secret, but it has been claimed that these tests are more reliable than current lie detector tests.