Glaciers shrinking at alarming rates due to global warming

The world’s glaciers are shrinking five times faster now than they were in the 1960s. 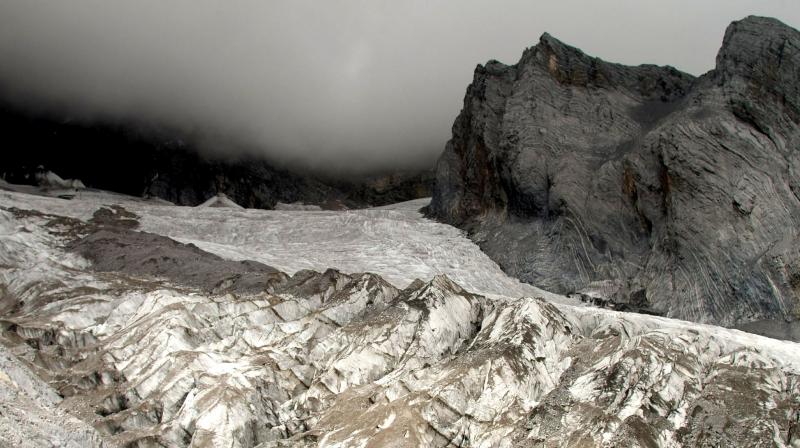 The Baishui glacier on the Jade Dragon Snow Mountain in the southern province of Yunnan in China is one of the fastest melting glaciers in the world as it has lost 60 per cent of its mass since 1982. (Photo: AP)

Washington: Earth’s glaciers are melting much faster than scientists thought. A new study shows they are losing 369 billion tons of snow and ice each year, more than half of that in North America.

The most comprehensive measurement of glaciers worldwide found that thousands of inland masses of snow compressed into ice are shrinking 18 per cent faster than an international panel of scientists calculated in 2013. The world’s glaciers are shrinking five times faster now than they were in the 1960s. Their melt is accelerating due to global warming and adding more water to already rising seas, the study found.

“Over 30 years suddenly almost all regions started losing mass at the same time. That’s clearly climate change if you look at the global picture,” said lead author Michael Zemp, director of the World Glacier Monitoring Service at the University of Zurich.

The glaciers shrinking fastest are in central Europe, the Caucasus region, western Canada, the US, New Zealand and near the tropics. Glaciers in these places on average are losing more than 1 per cent of their mass each year, according to a study in Monday’s journal Nature. “In these regions, at the current glacier loss rate, the glaciers will not survive the century,” Zemp said.

Zemp’s team used ground and satellite measurements to look at 19,000 glaciers, far more than previous studies. They determined that southwestern Asia is the only region of 19 where glaciers are not shrinking, which Zemp said is due to local climate conditions. Since 1961, the world has lost 10.6 trillion tons of ice and snow (9.6 trillion metric tons), the study found. That’s enough to cover the lower 48 US states in about 4 feet of ice.

Scientists have known for a long time that global warming caused by human activities like burning coal, gasoline and diesel for electricity and transportation is making Earth lose its ice. They have been especially concerned with the large ice sheets covering Greenland and Antarctica.

This study, “is telling us there’s much more to the story,” said Mark Serreze, director of the National Snow and Ice Data Center in Boulder, Colorado, who wasn’t part of the study. “The influence of glaciers on sea level is bigger than we thought.”

A number of factors are making sea levels rise. The biggest cause is that oceans are getting warmer, which makes water expand. The new figures show glacier melt is a bigger contributor than thought, responsible for about 25-30 per cent of the yearly rise in oceans, Zemp said.

Rising seas threaten coastal cities around the world and put more people at risk of flooding during storms. Glaciers grow in winter and shrink in summer, but as the Earth has warmed, they are growing less and shrinking more. Zemp said warmer summer temperatures are the main reason glaciers are shrinking faster.

While people think of glaciers as polar issues, shrinking mountain glaciers closer to the equator can cause serious problems for people who depend on them, said Twila Moon, a snow and ice data centre scientist who also wasn’t part of the study. She said people in the Andes, for example, rely on the glaciers for drinking and irrigation water each summer.

A separate study Monday in Environmental Research Letters confirmed faster melting and other changes in the Arctic. It found that in winter, the Arctic is warming 2.8 times faster than the rest of the Northern Hemisphere. Overall, the region is getting more humid, cloudier and wetter. “It’s on steroids, it’s hyperactive,” said lead author Jason Box, a scientist for the Danish Meteorological Institute.