Mangaluru girl Tanvi Jagadish is a national champion in stand-up paddle racing, and will represent the country in Denmark soon. 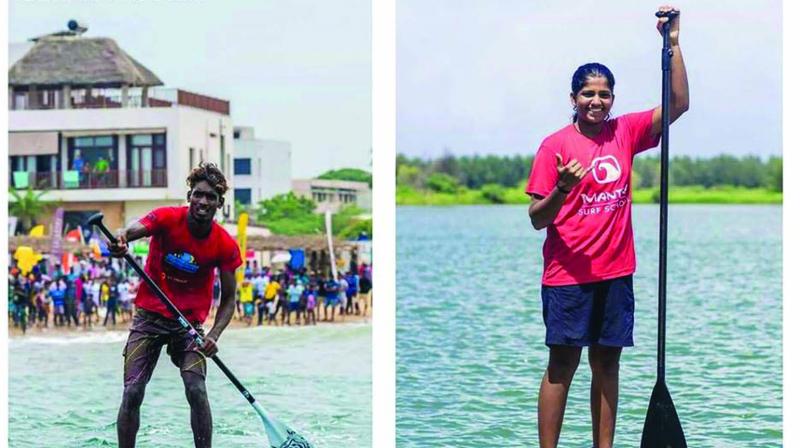 Tanvi Jagadish had no idea what surfing was. In fact, when she did take a fancy to it, she didn’t even know how to swim! That was then. Now, at 17, this Mangaluru girl is India’s first female stand up paddle surfer. Having represented India internationally for the first time in the sport at the West Marine Carolina Cup in North Carolina, USA, earlier this year (and winning it!), the five-time national champion now has her sight set on winning the World Championships at Denmark.

“Being an only child, my parents were so scared of me going to surf in the ocean,” says Tanvi, who recollects how she patiently convinced her folks that this was her passion. She first heard about it from her older cousin brother who was stoked about the sport and she wanted to try it too.

“I had breathing problems and didn’t know how to swim. But I took my grandma’s permission before I went to try out because I knew that my parents would never be on board,” she quips. “Funnily enough, the breathing issues cleared out from me staying in salt water and surfing for long,” she confesses.

A student of Sharadha Pre University College in Mangaluru, she found her feet (literally) at the Mantra Surf Club in Mulki. The determined youngster travels 15 kilometers from home everyday to warm up her paddle strokes and surf in the morning and evening after college. “I think the sport is catching up fast in India. In other countries, athletes are trained from when they are really young and they have the support from family, society and their parents. We should get over the myth that the ocean is dangerous — if you understand nature and safety for instance, it’s not,” says Tanvi who, to this day, kisses the ocean before she ‘wraps up in its love.’

As she recounts, it’s not just initial opposition from her parents. “The society too would speak ill about my clothing and complexion,” she says. But she persisted going on to win first place at everything from the Covelong Point Surf Festival to the Indian Open of Surfing and the Manapad Surf Festival. She was also the first to represent India in stand up paddli ng at Fiji ISA where out of 247 people from 26 countries, she stood in the top 16. And like she says, she’d rather be doing nothing else. “I wouldn’t be happy if I’m not in the ocean, making friends from around the world or creating awareness about the ocean,” she says. The livewire has greater dreams too. “I see myself training a lot of girls for international stand-up paddling competitions, and representing India wherever I can. I want to make India proud,” she smiles.