Check out this bar with monkey waiters 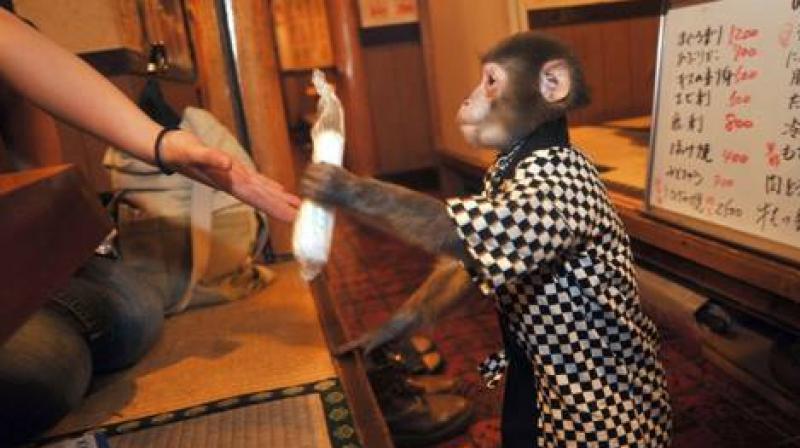 Fuku-chan can usually be seen dressed in a chequered waiter’s shirt and skirt, bringing guests beer and fetching napkins for diners. (Photo: Facebook)

It looks like any other traditional-style Japanese ‘sake-house’ but Kayabukiya Tavern is one with a difference. What sets this restaurant on the modest premises in Utsonumiya different from others is that over here, human waiters have been replaced by Macaque monkeys.

While the original Mazaque waiter of the place was Yat-chan, seventeen year olf Fuku-chan was ushered into waiting table after she delivered a napkin to a table unprompted.

The restaurant owner Kaoru Otsuka then decided to pair the two and now people from all corners of the world come to be served the monkeys.

Fuku-chan can usually be seen dressed in a chequered waiter’s shirt and skirt, bringing guests beer and fetching napkins for diners.

If Fuku-chan and Yat-chan do a good job patrons are encouraged to leave them tip of soya beans.

The owner Otsuka says that the monkeys are closer to him than his own family and he even sleeps with them around. Monkeys have been working at the bar for some 29 years, reported 28 Lab.