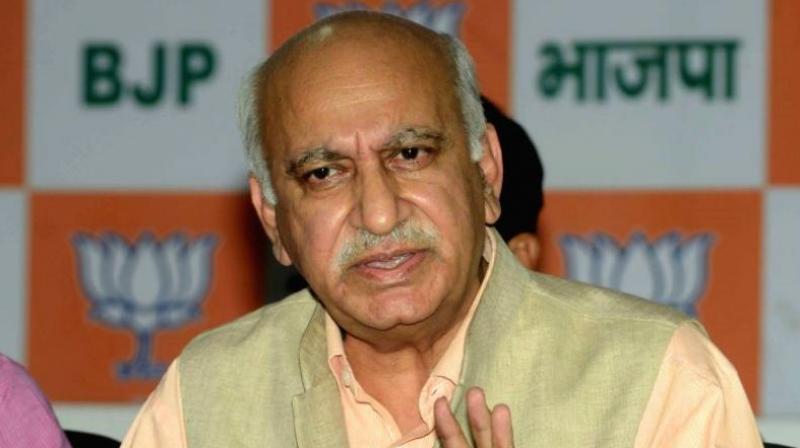 Another journalist too echoed Ramani's allegations tweeting that in her case it was at Taj Bengal, Kolkata and that after the encounter, she declined the offer.

In October last year, while the #MeToo movement was raging across Hollywood, Priya Ramani had written a piece for Vogue India titled 'To the Harvey Weinsteins of the world" where she went on to narrate about a harrowing incident of sexual misconduct she faced during a job interview at the hands of a reputed journalist who had "transformed Indian journalism."

The article, that went on to read, “You know how to pinch, pat, rub, grab and assault. Speaking up against you still carries a heavy price that many young women cannot afford to pay,” however, did not mention any names at the time of its publication. Now, as India reels under names being forwarded of comedians, actors, authors, mediapersons who have all been perpetrators, Ramani has gone on to reveal that the name of the harasser on who the piece had been penned is Union Minister and former editor with leading dailies MJ Akbar.

I began this piece with my MJ Akbar story. Never named him because he didn’t “do” anything. Lots of women have worse stories about this predator—maybe they’ll share. #ulti https://t.co/5jVU5WHHo7

Another journalist too echoed Ramani's allegations tweeting that in her case it was at Taj Bengal, Kolkata and that after the encounter, she declined the offer.

Mine was Oberoi Bombay. Only the best for this editor. https://t.co/PCW6zWPVkG

Soon afterwards several other journalists too accused the former editor of calling women to his hotel rooms for interviews, or making them feel uncomfortable.

Journalist Prerna Singh Bindra spoke about the 'brilliant, flamboyant' editor who had called her for her first job to his hotel room, going on to mention in a later tweet that it was MJ Akbar, while another journalist Harinder Baweja also tweeted how so many women have an "MJ story."

He was this brilliant,flamboyant #editor who dabbled in politics, who called me-my 1st job- to his hotel room to 'discuss work', after i put the edition to bed-read midnight, & made life at work hell when i refused.,cudnt speak up due to various compulsions, but yes #MeTooIndia

So many of us have an MJ story. "Can I come over to your house with a bottle of rum?" he said. NO, was the answer.... Couldnt 'do' anything. Some dont get the meaning of No... they move on to the next, dont they https://t.co/eMnO6Y3PNX

The accusations against Akbar and another cabinet minister of the Modi government follow close at the heels of the 'stepping away' of Tanmay Bhat, accused of not acting against the complaints of former AIB member Utsav Chakravorty who too has been accused of sexual misconduct.

Not only Akbar, stories of anger and guilt that had been buried for years started emerging after journalist Sandhya Menon recouted, on twitter, of the sexual harassment she allegedly faced from two senior editors, KR Sreenivas and Gautam Adhikari.

In fact, it seems that former executive editor at Times of India and former editor-in-chief of DNA, Gautam Adhikari might have resigned from his post as senior fellow at the Center for American Progress in Washington DC following allegations of sexual harassment against him.

Following Sandhya Menon and Sonora Jha's accusations against Adhikari, Tara Kaushal, a writer on gender, sexuality and rights too came out saying that Adhikari had made sexual advances towards her during her initial days in media.

According to The Wire, when they emailed Gautam Adhikari for his response to Kaushal’s allegation, he said that he did not recall the incident, but apologised if his behaviour made someone uncomfortable. Writing to The Wire about him leaving his honorary non resident position from the Center of American Progress, he added that he did not want to involve the organisation in any embarrassment following the tarnish of his image.

Another journalist Anoo Bhuyan called out Mayank Jain, principal correspondent at the Business Standard, for ebing a 'sexual predator.' Women also took to Twitter and posted about Anurag Verma, a former editor at Huffington Post who had asked several women for nude pictures.

Chief of bureau and political editor of Hindustan Times, Prashant Jha, too tendered his resignation after a woman lawyer accused him of unwanted messages on WhatsApp. He continues to be a reporter without managerial responsibilities in the organisation.

However, while the centre is yet to give out a statement on Akbar, a video of Sushma Swaraj ignoring a journalist's question on allegations against MJ Akbar and whether there will be any probe into the accusations has gone viral on social media.

As long buried accusations keep on surfacing in the entertainment and media industry in India, it remains to be seen what direction the country's very own #MeToo movement takes.