How highways in Brazil are paving way for future 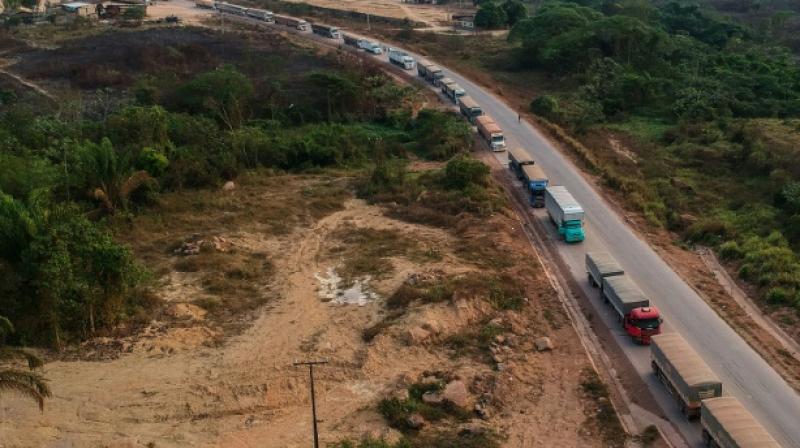 The BR163 in Brazil's Para state is a major transport route. (Photo: AFP)

Brazil: Trucker Erik Fransuer spends months at a time driving back and forth on highways that cut through the Amazon in northern Brazil, delivering soy or corn to river ports. Fransuer is one of thousands of truckers plying the BR230 and BR163, major transport routes that have played a key role in the development and destruction of the world's largest rainforest, now being ravaged by fires.

"I like the freedom of being on the road," Fransuer, 26, says as he and other drivers relax in hammocks strung up between trucks parked side by side at a gasoline station in the dust-blown town of Ruropolis. Fransuer spends at least 12 hours a day sitting in his big rig listening to fast-paced music as he bounces along the highways constructed nearly 50 years ago and somehow still not finished.

Meter-wide potholes, bone-jarring corrugations, rickety wooden bridges and billowing red dust that wipes out visibility along dirt sections of the mostly two-lane roads make them hazardous to navigate at the best of times. "That way, there's no road," says Fransuer, gesturing in the direction of the BR163 connecting Ruropolis and Santarem, which until recently was a rough dirt track.

But it is changing. Eager to develop the Amazon to bolster Brazil's weak economy, President Jair Bolsonaro's government this year plans to finish asphalting the 1,770-kilometre (1,100-mile) BR163 stretching north from Cuiaba, the capital of the central-west state of Mato Grasso, Brazil's grain-growing powerhouse, to Santarem.

Road workers are also paving sections of the more than 4,000-kilometre BR230, known as the Trans-Amazonian highway, which cuts across the rainforest from the Atlantic coast city of Joao Pessoa to Labrea in the west. Single-lane wooden bridges, barely able to support trucks hauling trailers loaded with 30 tons of grain, are also being replaced with concrete spans.

"There are a lot of accidents, a lot of deaths here," says Darlei da Silva, as he toils in intense heat to install a new bridge on the BR230. It is one of 18 being built along the highway, he says. "It's really going to improve things."

The highways were built by the military dictatorship in the early 1970s to populate the remote region, which it saw as deserted, notwithstanding the indigenous tribes and traditional communities living there, and vulnerable to foreign invasion.

Deforestation followed as a wave of pioneers, rural poor enticed to the rainforest on the promise of land and a better future, began clearing jatoba, itauba, marupa and cedar for their crops. It accelerated in the following decades as cattle breeders, soy farmers and illegal loggers slashed their way deeper into the Amazon basin, where more than 20 million people now live.

During a recent trip to Para, where Ruropolis is located, an AFP team drove past swaths of land stripped of trees and ranches with names such as "My Dream" or "Good View." Where virgin forest once stood, herds of Brahman cattle graze on pasture or huge machines harvest grain.

Newly deforested areas were scorched by recent blazes that singed the primary forest, despite a burning ban in the Amazon following an international outcry. The smell of smoke hung in the air until the rains finally came.

The highways, and dirt roads branching off them, have fuelled illicit activities in the region, such as wildcat mining and land grabs. "In our research... in the Trans-Amazonian and BR163 areas, we found that the moment you open a road, you enable deforestation of around 100 kilometres along those roads, meaning 50 kilometres on one side and 50 kilometres on the other," Socorro Pena, a former researcher at the Amazon Environmental Research Institute, tells AFP. Big roads and big infrastructure projects are causing a high rate of deforestation and environmental problems, and are really hurting the local population."

The more than 2,000-kilometre round trip from Sinop in Mato Grasso to ports in Miritituba or Santarem in neighbouring Para should take truckers three days. But they often end up spending several days queued up at terminals on the Tapajos River waiting to unload, with port operators overwhelmed by China's insatiable demand for Brazilian soy.

Travel times are even worse during the wet season from November to June, when sections of the highways turn into thick mud, or when hundreds of wildcat miners block a highway for days to demand legal status, like they did recently in Moraes Almeida, which straddles the BR163. Fransuer, who has been driving for six years, says he sees on average 10 truck accidents a day owing to the poor conditions.

The number of trucks on the highways is expected to explode in the coming years as grain operators build more ports. As many as 6,000 trucks are expected to pull up daily at Miritituba ports in the next five years, once the number of terminals triples to 15, says the mayor of Itaituba, Valmir Climaco de Aguiar. That compares with the current 1,500 trucks a day.

Highway and port upgrades will cut transport costs for grain growers in Mato Grosso, who will be able to export more of their crops through terminals in the north instead of the south, which are further away from their farms. But not everyone in Para feels they are benefiting.

Locals fear increased truck traffic will make the highways more dangerous and churn up more dust that already leaves a red stain on everything. "I do my washing at night when there are fewer cars on the road" to avoid the dust, says Dayana Rodrigues Melo, a mother of four in Ruropolis, where streets are unpaved. Temperatures have risen in the region as a result of deforestation, locals say.

Expanding farming has also driven up land and house prices, and replaced food crops that previously supplied the local market, says Sandro Leao, an economics professor at the Federal University of Western Para. Wages and employment, however, have not kept pace. And cell phone service is non-existent outside the big towns.

"The economic model... which uses the northern logistical area for transport, favours mainly those involved in the export business," Leao says. "That means the ranchers, exporting firms, big traders and grain exporters." Better infrastructure is also good news for truckers like Fransuer. They get paid around 1,000 reais (USD 240) for each load delivered to port. It could enable Fransuer to do more trips a month and better support his young family, who live elsewhere in the northeastern state of Paraiba. "It's hard," he says.