This Kannadathi took her love for Kannada to a whole new level when she spoke at the Sydney Language Festival. 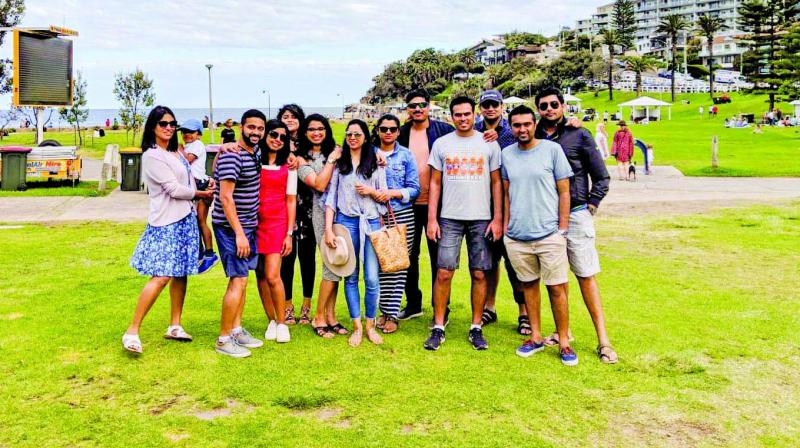 Divya Nagavara with other language enthusiasts

From binging on copious amounts of masala dosa and watching Mayamruga in the evenings, to taking her love for Kannada all the way to Australia, Divya Nagavara has come a long way. The Bengaluru-bred hudugi, who started the Sydney Kannadigas Meetup after moving there, recently spoke about Kannada at the Sydney Language festival.

Talking about her tryst with the festival, Divya, senior project officer at Liquor & Gaming NSW reveals, “I wanted to spread my love for Kannada outside the meetup events and hence reached out to the Indian organiser who was sourcing talent for south Indian languages. I got an opportunity to speak about the language, its history and cultural heritage. The purpose of the Sydney Language Festival was to showcase the great linguistic diversity of languages (like Arabic, Finnish, Cherokee etc) in existence.”

To make her speech more interactive, Divya spoke about how to greet a person in Kannada and had the audience repeat after her. “I spoke about the vocabulary that includes consonants and vowels and how to pronounce a few difficult letters that people here find hard. I even enlightened the audience about the different dialects in Karnataka, the music and dance forms.

The best part was explaining the humourist playwright TP Kailasam and his works. I even crooned the track Tipparalli Balu Doora and compared it to ‘It’s a long way to Tipperary’. After speaking about some Kannada slang, I finished it off with the best topic – masala dosa’ and described it as a lentil-based crepe rolled with potato filling and eaten along with chutney and curry!” she quips.

As she recollects her journey from the ooru to Australia, Divya reveals that she first worked at Infosys Mysore where her rendezvous with her husband happened. Soon, her hubby got the opportunity to do his MBA at a B-school in Melbourne. “We moved there in 2012.Cracking my first job here was a trial by fire, and one of the big motivating factors behind starting the Kannada meetup here. I was busy settling in but felt a sense of nothingness. Eventually I joined the largest professional meetup in Sydney for software testing with 3000 members and became the organiser,” she shares.

Once she got the hang of running a meetup, the Kannadathi was keen on building a similar one, specifically for newly migrated Kannadigas who were looking for jobs. “I started building a community where people got together online and offline. I was sure that there were numerous people from Karnataka who migrated on a permanent residency visa and were in a similar boat. The lack of friends from the same age group who couldn’t say “macha, guru” was disappointing. That’s when I started “Sydney Kannadigas Meetup” in the hope of finding like-minded people.  This is now four years old and has about 550-plus members. My friend Adarsh and brother Darshan help me run it.”

From conducting monthly events to assisting people in settling in, the Sydney Kannadigas Meetup also hosts social catch-ups, picnics, archery tag, bowling and charity events. “We also run blood donation programs and collect clothes for charity. We even help new migrants catch a break in the job market. We’re planning to setup a separate section for helping migrants who are suffering domestic violence and undergoing divorces/separation from their spouses,” shares Divya, who insists that the main purpose of each event is to converse only in Kannada. With the mission of making Sydney a ‘home away from home’ for migrants from Karnataka, the ardent Bengalurean says, “We have no membership fee – I source the meetup subscription fees from personal expenses.”