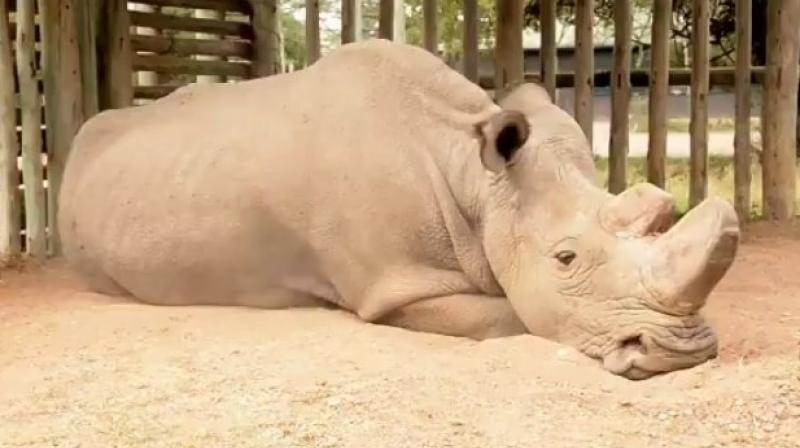 A photo of one of the world's only male white rhino went viral after it was posted on Twitter by Daniel Schneider, a biologist from Boston.

According to reports in the Telegraph, all breeding attempts between Sudan, the 44-year-old rhino and the surviving females in a conservatory in Kenya have been unsuccessful.

Scientists are trying to develop IVF techniques that might keep their species alive.

The photo was posted on Twitter captioned: "Want to know what extinction looks like? This is the last male Northern White Rhino. The Last. Nevermore"

Want to know what extinction looks like? This is the last male Northern White Rhino. The Last. Nevermore pic.twitter.com/o4obIQUpaR

In 2009, Sudan along with three other rhinos was shipped from Czech Republic to Kenya with the hope that it would be easier for them to breed on African soil.

They live under armed guard on the Ol Pejeta Conservancy in Kenya.

The picture got over 40 thousand likes and eqretweets on Twitter, and quite a few were touched by the image.

So many species are on the brink because of human activities. Hunting, climate change, voodoo magic medicine, fur trade. List goes on.

💔 He knows… perhaps. He looks so sad, his eyes say everything. Thanks for sharing.

Humans are the worst animals, they become even more bad after they turn politicians. They don't deserve this!!! Sad!!!