Pre-wedding festivities have begun for Isha Ambani and Anand Piramal who will tie the knot in a strictly family-only affair at her Mumbai residence. 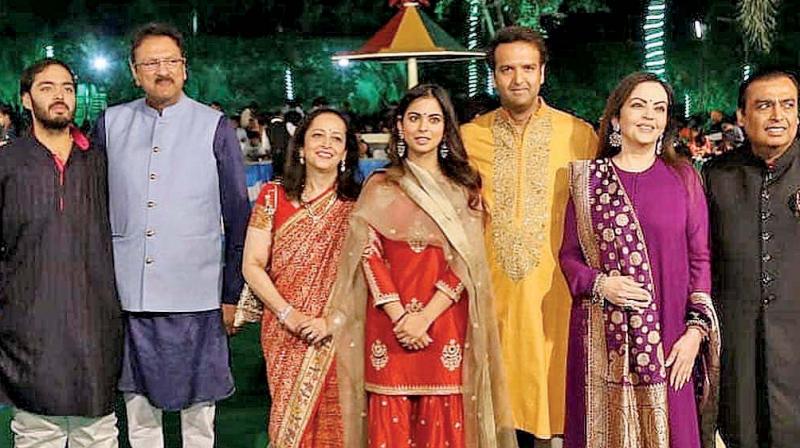 The Ambanis and Piramals pose together at the pre-wedding festivities.

The wedding season this year has been off the charts, right from the spectacular DeepVeer wedding in Lake Como, followed by a trail of receptions to Nickyanka's magnificent Jodhpur ceremony. And while we are still reeling from the unimaginable scale of opulence, the spotlight is now on Reliance heiress Isha Ambani and industrialist Anand Piramal, who's wedding is sure to trump even the grandest and most expensive shaadis of the year. Their three-day engagement bash at Lake Como in September was probably the most expensive betrothal of the decade and the wedding celebrations are in all probability going to be humungous, considering Isha is the daughter of India's richest family. 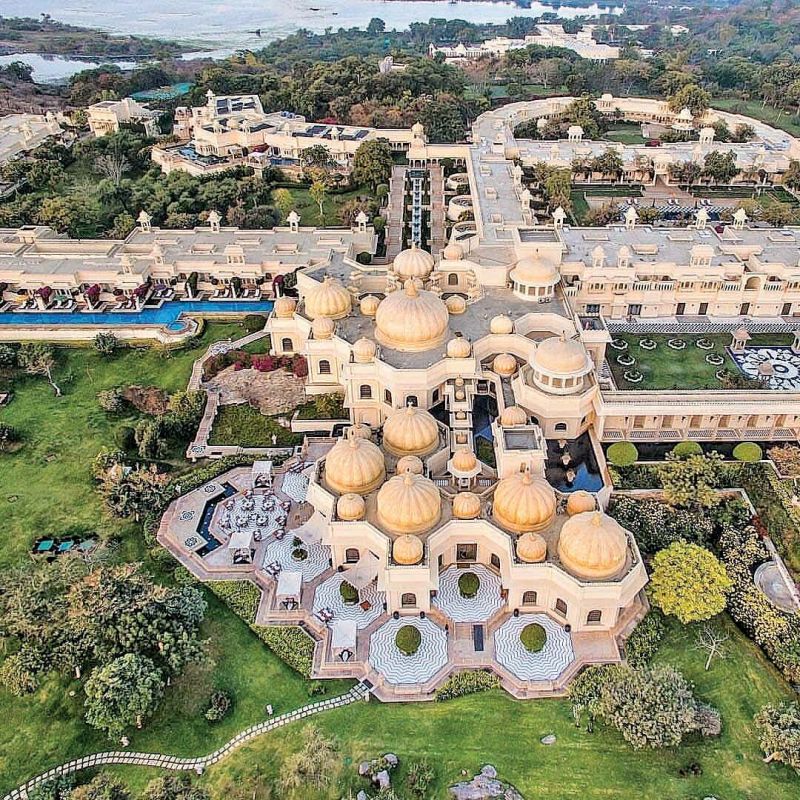 The Oberoi Udaivilas venue for the pre-wedding celebrations.

The pre-wedding rituals began yesterday; with the Ambanis feeding 5,100 orphans, homeless and differently-abled, thrice a day, in a ceremony called ‘Anna Seva’ with the function on going till December 10 at the Narayan Seva Sansthan in Udaipur. The beaming bride Isha Ambani posted a picture of herself at work with the caption: “My fav moments and pic. Anna Seva, serving food to children." 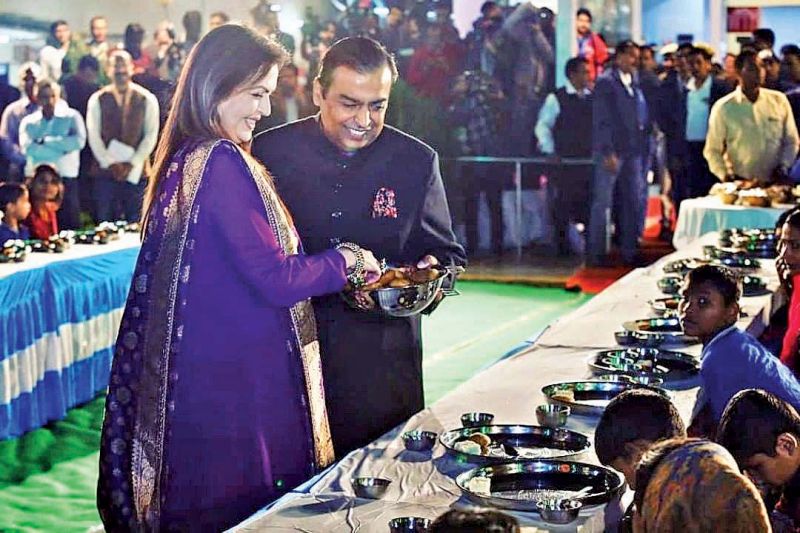 Nita and Mukesh Ambani at the Anna Seva function.

The pre-wedding festivities also include a unique exhibition called ‘Swadesh Bazaar’ that will showcase 108 traditional art and craft forms from various regions of the country. The exhibits will include indigenous prints and weaves like the Kanjeevaram, Patola, Chikankari and Badhani, all in a bid to encourage Indian craftsmanship, said a statement from the Ambani family, “Depicting folktales and local legends, artists will showcase ancient painting forms like Gond, Madhubani, Phad, Warli and Thangka. Weavers, potters and sculptures from all around the country will make this a mega-celebration of art and culture. This unique exhibit has not just provided livelihoods to thousands of such artisans, but also giving an opportunity to showcase their rare works from every nook and corner of India, for people's interest, appreciation and support.”

The three days festivities will also include a mehendi, sangeet and cocktail function.

It is rumoured that the newly wed Priyanka Chopra, who's a close friend of the bride will be performing at the sangeet. Superstar Shah Rukh Khan, Karan Johar and international sensation Taylor Swift will also regale the audiences with performances.

Singers A.R Rahman, Arijit Singh and Shankar Mahadevan are also on the cards and it is rumoured that Rahman will perform at the Mumbai reception following the wedding on December 12.

It is also said that American politicians Hillary Clinton and John Kerry will be flying down to Udaipur to grace the occasion and a source informs, “Hillary flew down for the sangeet.”

Reportedly, the guests have access to an exclusive app that has a detailed insight on the events of the days and the schedule. 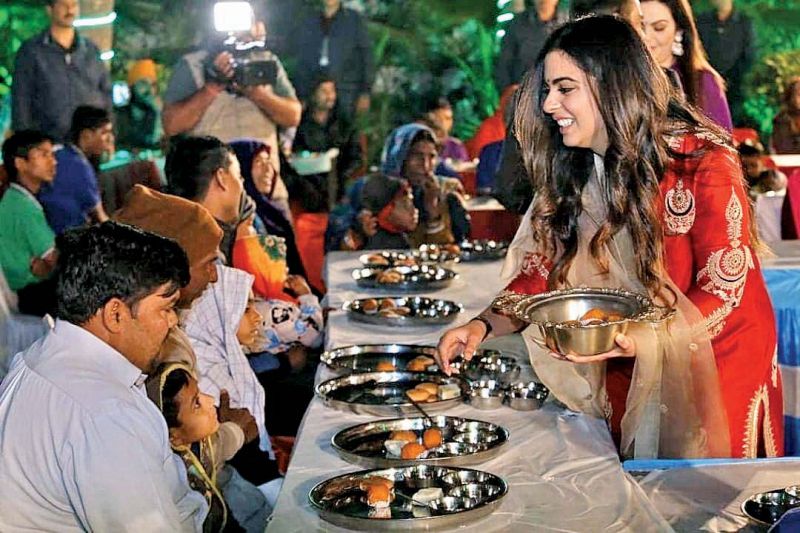 Isha Ambani serving food to the guests as part of the Anna Seva ceremony.

Special arrangements:
A fleet of Mercedes, BMW'S and Jaguars have been specially hired by the Ambani family to pick and drop their guests at the venue.

Over 100-chartered flights have been flying in and out of the otherwise sleepy Udaipur airport. Reportedly, special customs and immigration counters have also been set up at the airport and will be functional for the next five days.

While there is no official confirmation, Tata Vistara airlines, which don't commute to Udaipur, will be specially operating flights between Delhi, Udaipur and Mumbai over the weekend, the airlines mentioned in a tweet.

The wedding is a tightly guarded affair, but Bollywood's most famous paparazzo Viral Bhayani has his eyes closely fixated on the venue. He says, “The inside of the The Oberoi Udaivilas and City Palace looks grand and beautiful.”

The photographer also recently posted a picture of the massive Lord Krishna Idol built on Lake Pichola for the auspicious Shri Nath Ji Maha Aarti that took place ahead of the festivities. The idol is built on a number of floating boats on the lake that firmly holds the idol of Ambani's patron deity Lord Shrinath ji.

According to a report in DNA, the event management company for the wedding has created a water-world built on pontoons and boats on Lake Pichola. The report states, “They have requested one at the Udai Vilas Ghat that can accommodate 1,000 guests at a time.” Dancers will also perform on the floating stage.

Superstar quotient:
Celebrity designer Manish Malhotra will work his sartorial elegance at the pre-wedding functions. A source confirms, “Manish will be doing everything, including the design on the napkins for the wedding.” The couturier will also host a two-day pop-up at the venue for the guests to pick up from his range of ethnic ensembles and jewellery.

Additionally, ace photographer Joseph Radhik who was the cameraman for Virushka and Nickyanka wedding, will be the lensman at Udiapur.

After the celebrations at Udaipur, all the guests will return to Mumbai. The couple will tie the knot in a strictly family-only affair at the Ambani's Mumbai Antilia residence.

The families announced in a statement, “We are delighted to share that the marriage of Isha Ambani and Anand Piramal will take place in the residence of Shri Mukesh Ambani and Smt. Nita Ambani in Mumbai with family members and close friends on 12th December, 2018. The ceremonies will be performed in accordance with Indian traditions, customs and culture.”