The plan focuses on the two US subpopulations of polar bears that live off the coast of Alaska. 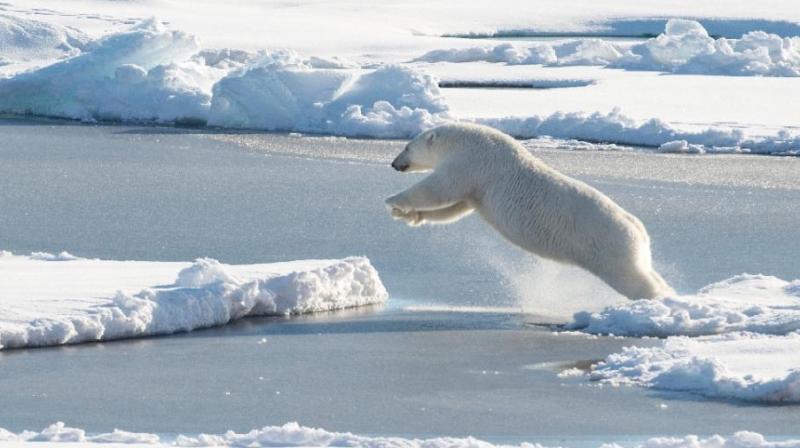 Polar bears were listed as threatened under the Endangered Species Act in 2008 because of the loss of sea-ice habitat (Photo: AFP)

Washington: US wildlife authorities released on Monday a broad plan to try to save Arctic polar bears from going extinct, as global warming melts away their icy habitat an increasing pace.

With just 22,000 to 31,000 polar bears estimated to be left in the world, the US Fish and Wildlife Service's Polar Bear Conservation Management Plan calls for a series of actions to save these iconic creatures.

Above all, it calls for reducing global greenhouse gas emissions, which arise from the burning of fossil fuels and contribute to a warming climate.

"This plan outlines the necessary actions and concrete commitments by the (Fish and Wildlife) Service and our state, tribal, federal and international partners to protect polar bears in the near term," said Greg Siekaniec, Alaska Regional Director of the FWS.

"But make no mistake; without decisive action to address Arctic warming, the long-term fate of this species is uncertain."

The plan also calls for reducing conflicts between humans and bears, along with protecting their habitat and minimizing the risk of contamination from oil spills.

Close management is urged for polar bear hunting, or a practice known as "subsistence harvest" that is legal for indigenous people and involves killing less than four percent of the bear's total population per year.

"Most of these actions are already under way, in partnership with Alaska Native communities, nonprofit groups, and industry representatives who participated in the plan's creation," said a statement from the FWS.

The plan focuses on the two US subpopulations of polar bears that live off the coast of Alaska. But its efforts should also help conserve polar bears in the rest of their northern range, which includes Russia, Canada, Norway and Greenland.

Polar bears were listed as threatened under the Endangered Species Act in 2008 because of the loss of sea-ice habitat. Since then, conditions in the Arctic have deteriorated due to global warming.

The area of the Arctic covered by sea ice in October and November 2016 was the lowest on record for that period.

"If greenhouse gas emissions continue to rise at the current rates throughout the 21st century, polar bears will likely disappear from much of their present-day range," the FWS statement warned.