Talking about what works in the world of architecture

Principal architects of Morphogenesis share their views on architecture in India, trends and their new book. 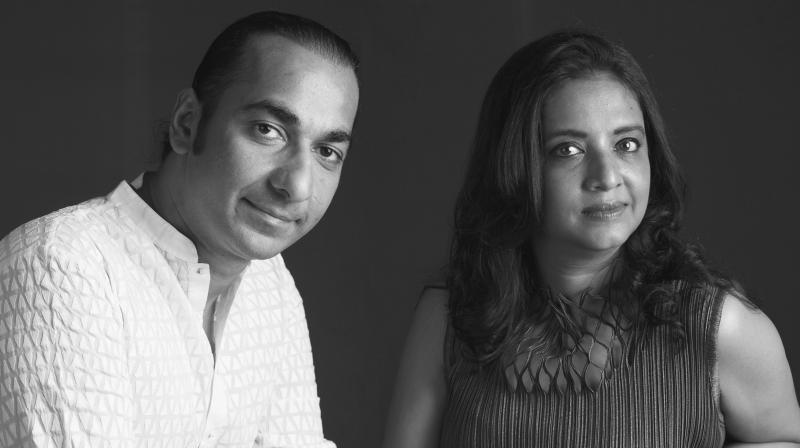 Principal architects Manit and Sonali Rastogi share their views on architecture in India, trends and the book itself.

Celebrating 20 years of being at the forefront of Indian Architecture, New Delhi and Bangalore-based Morphogenesis became the first Indian practice to feature in Images’ Master Architect Series launched globally at the Frankfurt Book Fair. The firm’s first monograph has been named Morphogenesis: The Indian Perspective | The Global Context.

Speaking about the book, Michael Webb, Architectural Critic and Founder, Archigram Group had written, “Around the world, architects are challenged to infuse new forms with the legacy of the past and the spirit of place. In an age of globalisation this has become a critical issue, especially in emerging nations that have embraced generic modernism in their race to catch up.... Morphogenesis abstracts the vernacular with no resort to mimicry, and it achieves sustainability by an intelligent use of traditional materials and techniques.”

The book combines imagery with comprehensive studies outlining discourses across residential; institutional; commercial; hospitality and other architectural sectors. The book which is integrated with subsequential imagery and text is almost like a reflection of contemporary Indian perspective within the global context. The book provides a riveting study of Indian architecture, all the while bringing in a comparative study with the global scenario.

Speaking to this correspondent, principal architects Manit and Sonali Rastogi share their views on architecture in India, trends and the book itself.

How has architectural design progressed in the last twenty years with respect to India?

India has gone through a whole paradigm change in the last 20 years from being an insular nation pre-liberalisation to now being a part of a global dialogue on all fronts.

Earlier, Indian Architecture was a more regionalist form of Architecture whereas today, forces of globalisation and technology have an increasingly marked effect, leading to an emergence of global aspirations and resultant expectations from Architecture.

In this context, architecture is a strategic weapon to bridge boundaries and through discourse, it sets the ground for evolution and innovation.

What is new in the world of Architecture in India?

At the point of a paradigm change which match the liberalization of our economy, the first run of Global Architecture meant replication of western imageability buildings. What is new in the world of architecture now is contextual identity. It covers a wide discourse within Morphogenesis and defines a certain socio-cultural sensitivity, a rooting in local context that is seen across its projects in the last 21 years. It is now becoming well recognized and appreciated. Pre-liberalisation, Global recognition for Indian Architects was minimal but today the recognition in design, emanating out of India is growing and getting a voice and is in alignment of Morphogenesis vision at this point.

The Morphogenesis Monograph, The Indian Perspective | The Global Context, is a narration of 20 years of journey of our Architecture practice. It is a narration of how young Indians returned to India at a point of a paradigm shift which they did across many professions. Sonali and Manit set up a vision for why they were back and where they wish to see the Indian Architecture. Their journey describes and places their work within an intellectual discourse of Sustainability, Affordability, Identity and Livability. Their work entails positioning of Indian Architecture and the importance of it to be recorded and disseminated through a book is a representation of that attempt.

What does Morphogenesis attempt at putting forward?

Morphogenesis attempts to put forward it’s vision and certain deeply engrained notions that is required for Indian Architecture. This has set a global context and is well represented through the essays in the book. It not only represents the vision of their practice but inherent ideas underlying all the 26 projects.

What do you mean by sustainable design? How viable an option is it in India?

Sustainable design is best expressed through the essays in the book.

It has always been viable hence Morphogenesis borrows freely from Historic and Architectural interpretations of sustainability and these ideas are then integrated with modern technology, simulations, materials and methodology to create sustainable architecture.

In the global context, which country has made the most advances in architecture? How?

A boat shaped building made to harness and increase wind speed in a very high humidity area in Kerala that looks and follows the technology from a boat, that has existed from times in memorial in Kerala, is that really an advancement? Hence, advances are difficult to answer, appropriateness is probably what I would like to stay with.

From breaking completely free from old world charm to new age designs to trying to find a balance between the two, where would you say the Indian architecture scene stands at the present?

Morphogenesis does not believe in trends since architecture has core fundamental principles to be answered and it is an outcome of a process that gets followed. This process does not exclude charm and add new age, it creates an appropriate response and deals with certain fundamental qualities and aesthetic aspirations that may vary from project to project. We do believe in freely borrowing from Old world visuals and that is something we as a practice would not shy away from.

In the Indian context, what are the architectural designs that have withstood the test of time?

In the Indian context most vernacular Architecture has withstood the test of times because it is made with scarce resources, local materials and with the intention of lasting. However, there is again a categorization of what has withstood the test of times would be difficult to comment on. Architecture for Morphogenesis is recognition of a built form.

If you were to name the five most amazing architectural designs in India, what would they be and why?

Architecture is a much more seminal profession. It is a basic human response. Today when an internet search is done about India, 70% of the images that appear on screen are that of buildings both contemporary and from the past era hence it cannot be categorized.

Where do you see architectural designs going in the next five years?

5 years in Architecture means that the current buildings are all in construction. It is a long-standing profession and 5 years is too short a time to say where it is heading. However, we do hope that it responds to the energy crisis around the world in every ongoing project and the ones yet to come.

With a dire crunch in space in urban areas, how has the architectural space evolved?

With the rapid increase of urban density in our cities and with space being a major constraint there is a need to look out for solutions that allow the city to expand and not implode.

High rise is a response to the paucity of land, without a doubt, tall buildings and compact living may be directly related. In the local context, it would be important to comprehend that not all our cities have the potential to develop extensive infrastructure that would allow them to have a low rise perpetuate sprawl outwards and engulf the satellite towns.

Hence, the high rise comes inbuilt with the concept of stacking. Whether it is stacking of function or services, there is a need to understand that the quality of living of the citizens must be recognised and like all other reasonable architectural briefs, it must augment the lifestyle.

Hence, it has its own positive repercussions and the high-rise paradigm is here to stay both contextually and in terms of infrastructure.