New vasantashram has stood the test of time

At lunchtime, I pop into Radio Restaurant nearby, housed in a cavernous, abandoned movie theatre. 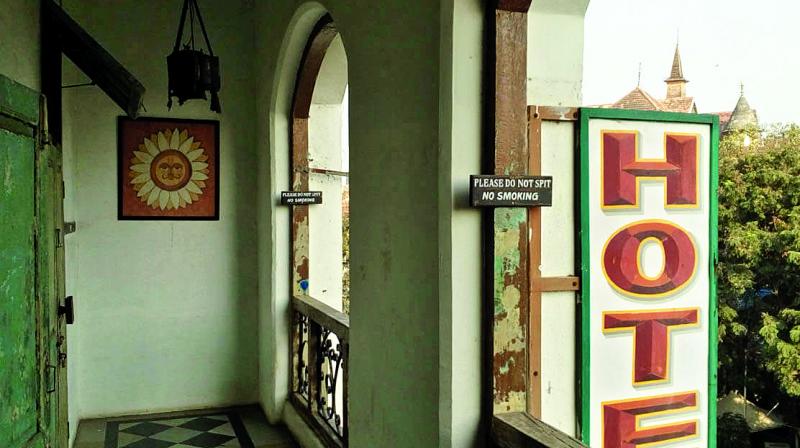 Keshava shows me to the common room that is a riot of colours. Grey-and-black floor tiles, sky-blue rafters, white ceiling.

New Vasantashram Boarding and Lodging House is seven months older than independent India. Founded by Mangalorean brothers Pilinja Laxminarayan Rao and Subba Rao on the third and fourth floors of a mansion opposite Crawford Market, it straddled the watersheds of sovereignty and race; Lokmanya Tilak Road, which it abuts, was the great divide between British Bombay and Native Town.

In its fledgeling years, the silver-tongued siblings would haunt Victoria Terminus down the road and persuade alighting passengers to spend a night under their comfortable and affordable roof. Seven decades later, Vasantashram is preserved like a habitable museum of the Rs 40s – with Wi-Fi.

I walk into a narrow passage between shoe-shops, past a greeting-card vendor who has annexed both walls, turn right, left, up two flights of stairs past storerooms and a solicitor and lo! Cheery Warli art beckons me up towards leisure and light. If “lodging house” evokes a picture of a sordid little joint managed by a seedy lout where you sleep with one eye open, perish the thought. Wearing a spotless white lungi and vest, Keshava, who has worked his way up to supervisor over 46 years, genially checks me into my dorm. No juvenile, stultifying bunk beds here; individual bedsteads and gaddas let space occupy the space. The high-ceilinged room holds little else but a steel water-drum, a mirror, innovative lattices bearing clothes pegs, and a wardrobe just for Mr. Jayaram (I’ll introduce you later).

Keshava shows me to the common room that is a riot of colours. Grey-and-black floor tiles, sky-blue rafters, white ceiling. Easy-chairs upholstered with pista-green and saffron cushions, the door painted a shade of turquoise money can’t buy; like Waheeda Rehman, it grows more beautiful with age. A small writing desk is overlooked in favour of a seating device no one can quite figure out. Ornamental barrels in the corners feature Buddha and gopika motifs, and the three canary-yellow, peacock-blue, and parrot-green trunks can be dragged out for an afternoon’s read in the common balcony.

Out here, a fellow guest is leaning back in his chair, fingers knotted behind his head, feet up on the balustrade, snoozing in the winter sun. He is unmoved, perhaps, by the vista of Crawford Market’s clock-tower, the black-and-white brick façade of Musafirkhana, Taj Mahal Tower in the distance, and numerous colonial cupolas scattered across South Bombay.

At lunchtime, I pop into Radio Restaurant nearby, housed in a cavernous, abandoned movie theatre. One elegantly spiced chicken tikka biryani later, I wander into the lanes behind New Vasantashram. In an instant, I am set upon by itinerant salesmen peddling handkerchiefs, garbage bags, and junk jewellery. I fend them off to behold the slow-moving mass of two-legs and two-wheelers captivated by a glorious battle between a handcart laden with swatches, a wheelbarrow burdened with perus, and a hawker attempting to divest himself of an entire, dissembled sewing machine. Before Mumbai succumbed to the allure of advertising, this – Kalbadevi – was the commercial heart of Bombay.

Back at Vasantashram, our friend Keshava, who started on a monthly salary of 30 rupees, tells me of a time when six rupees would you get you two hot meals, tea twice a day, and a bed for the night. When police and bank employees working nearby, along with textile and gemstone traders from adjacent Mangaldas Market and Zaveri Bazaar, would cough up the princely sum of 30 rupees a month for daily meals comprising one “wet” and “dry” sabzi each, puris, rice, rasam, saambaar, curd, and pickle with a sweetmeat on Sundays. Keshava, a formidable linguist after aeons of conversing with folks from different parts, used to cook the repast himself. The last full meal at Vasantashram was served 30 years ago.

A cup of tea and akuri at Kyani’s later, I stroll over to watch the liveried Navy Band play show tunes and classical compositions in the historic quadrangle of St. Xavier’s College. You need only glance at a map to realise that from Vasantashram, all things interesting are but a Victoria-ride away. 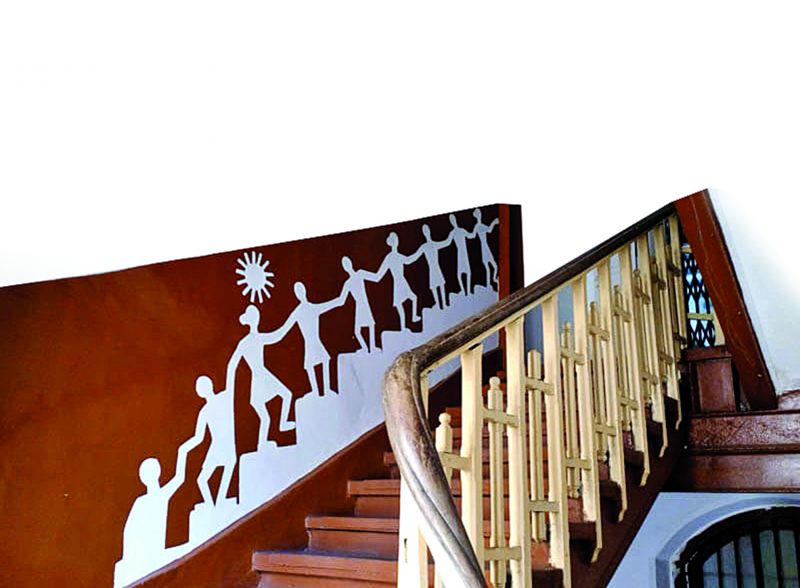 Arguably the most captivating attraction of a sojourn at Vasantashram is a conversation with managing partner Sujata Pilinja Rao, who took over from her father. As she shows me around her family legacy, I am impressed by her decision to conserve, not renovate: she pared back the walls to reveal vintage iron pillars and commissioned an artist guest to brighten utilitarian surfaces with dollops of art. An artist herself, she put up prints of traditional Indian art in each room and employed her creative sensibilities to enrich the quaint interiors of her hostel-hotel: block-print moulds are doorknobs, a circular stained-glass window from Do Taaki is a partition, ship lanterns from Darukhana provide illumination, timber from an erstwhile mezzanine floor is used to suspend bulbs, and outmoded railway sleepers stand shoulder to shoulder in the doors of the Indian-style loos, the usage of which is explained in a hilariously-worded guide (“your face should be facing the door, not your bum”).

Sujata digs out tariff cards from the past – a bed in my four-bed dorm cost 18 whole rupees in 1981; in 2017, it was still a wallet-friendly 350. This explains the diversity of my fellow guests: German backpackers, a young finance professional, two Nagpur auditors, a Goa-bound Australian couple, and Mr. Jayaram. The last-named gent is a trader from Chennai who has been a frequent, long-term guest since 1962. He has his own bed, aforementioned wardrobe, and nightstand on which he will perform the quietest dry shave in the wee hours of tomorrow morning.

But for now, the homely house is settling down. The latecomers straggle in. Beds are dragged closer to the fan. My neighbour plugs in his earphones and drifts off. As do I.