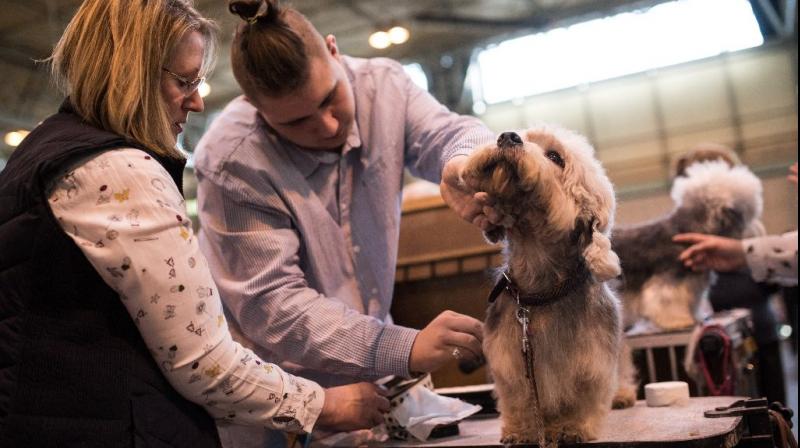 Dandie Dinmont Terriers were all the rage in the 1800s, with queen Victoria jumping on the craze. (Photo: AFP)

Birmingham: Eclipsed in the rush for so-called designer dogs, some famous British breeds are now threatened with extinction, the world's biggest dog show Crufts warned as it kicked off its annual showpiece event.

Globally-famous native breeds are being squeezed out by handbag-sized pooches better suited to modern busy lifestyles and smaller homes, said the famous dog show. But Crufts is trying to raise their profiles before the 160,000 visitors expected at the National Exhibition Centre in Birmingham, central England, for the four-day extravaganza, which closes Sunday.

"We could see these breeds effectively become extinct," said Bill Lambert, health and breeder services manager at The Kennel Club, which runs Crufts and is the governing body for all matters canine in Britain.

"We have seen a trend in Britain away from larger dogs to smaller dogs due to lifestyles and people living in cities more. It's a vicious circle: they become less popular, then people see them less and forget about them," he told AFP.The Kennel Club registers newborn puppies, with Labrador Retrievers (33,856), Cocker Spaniels (21,854) and the increasingly popular French Bulldogs (21,470) topping the charts last year.But some native former favourites are now down at the bottom and classed as vulnerable British breeds, including Bloodhounds (53), King Charles Spaniels (84) and Mastiffs (102).

Greyfriars Bobby, who held a 14-year daily vigil at his master's grave in Edinburgh until his own death in 1872, remains a world-famous dog. But Skye Terriers like him now top the vulnerable British breeds list, with just 28 puppies registered last year.

There are an estimated 600 to 800 left in Britain and only 3,000 worldwide, meaning extreme care must be taken with bloodlines to avoid inbreeding."They've become unfashionable. It's horrendous and awful. I wish people would get to know them," said Margaret Samuel, a Skye owner and enthusiast who brought along her pet Donald.

"He'll lick you to death!" she said."They look funny and I think they have a sense of humour. They certainly have their own opinion."Dandie Dinmont Terriers were all the rage in the 1800s, with queen Victoria jumping on the craze."Dandies were the first celebrity breed," said owner Kevin Noble.But only 91 puppies were registered last year. They typically cost around Â£1,000 ($1,200, 1,150 euros). Dandies were bred to hunt badgers and like Otterhounds, their working purpose has been outlawed, harming numbers.

However, Otterhounds have adapted to become docile family dogs."I don't think Heather would know what to do with an otter," Daryl Brotchie, an Otterhound Club committee member, said of her beloved pet."They're very chilled out. Look into their eyes and they look into your soul."Some 400 Otterhounds are left in their native Britain and 800 worldwide.

"You fall in love with the breed. But the gene pool is now really small," said a worried Brotchie. Just 40 newborn puppies were registered last year.Some hope a celebrity owner could revive the fortunes of vulnerable breeds.But even Pembroke Welsh Corgis -- famously beloved of Queen Elizabeth -- are on the vulnerability watch list, with just 393 puppies registered in 2016.

Now in its 126th year, Crufts sees dog owners from Britain and around the world bring their pets to compete at the 25 acre (10 hectare) site.Dogs are judged for best of breed, with winners competing for Best in Show -- the ultimate Crufts prize.

"At heart it is a very serious dog show, but Crufts is an extravaganza," said The Kennel Club's Lambert.It is an institution in British culture and winning Crufts is like winning Wimbledon -- it's the pinnacle."