Prince Harry given baby romper at first workday as father. 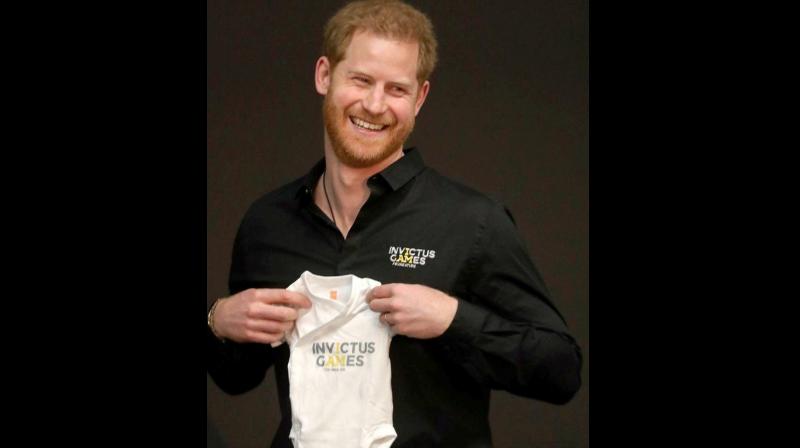 The prince’s trip to The Hague was his first public outing since he appeared before the cameras to announce the birth. (Photo: Instagram)

Hauge: Prince Harry was given a baby outfit for his son Archie by Princess Margriet of the Netherlands on Thursday as the new dad went back to work to mark a year until the 2020 edition of the Invictus Games he founded for wounded military personnel.

Harry, the Duke of Sussex, said he had “no idea” whether his son, whose birth was announced on Monday, would attend the sporting event in a year’s time - but he now has the baby onesie emblazoned with its logo.

Harry held it up to himself admiringly on stage, saying “put it on” and drawing loud applause from the crowd. Harry got his own special outfit too, wearing a jacket with the words “Invictus Family” and “Daddy” on the chest as he cycled during the launch.

He was also given a baby toy, a soft cube with a bell and a mirror, by 7-year-old Daimy Gommers, whose father Paul has competed for the Netherlands in the event.

The prince’s trip to The Hague was his first public outing since he appeared before the cameras on Monday to announce the birth. He and wife Meghan showed off their son before a small group of the media at Windsor Castle on Wednesday.

The couple announced later on Wednesday they had named their newborn, the seventh-in-line to the British throne, Archie Harrison Mountbatten-Windsor. Prince Harry’s Invictus Games were first held in London in 2014, inspired by his military service, having completed two tours in Afghanistan.

The games, during which veterans take part in sports including wheelchair basketball, sitting volleyball, and indoor rowing, will be held in The Hague next year. Harry, who was greeted by cheering fans and children, mingled with veterans as they practiced in a gymnasium, stopping at one point to try his hand at archery.

Dutch veteran Ronald van Dort, 37, who lost both his legs when he served in Afghanistan in 2008, told Reuters the presence of Prince Harry and his commitment to the Invictus Games were very important to war veterans.