Through Victory the family intents to change the way the world perceives intersex people. 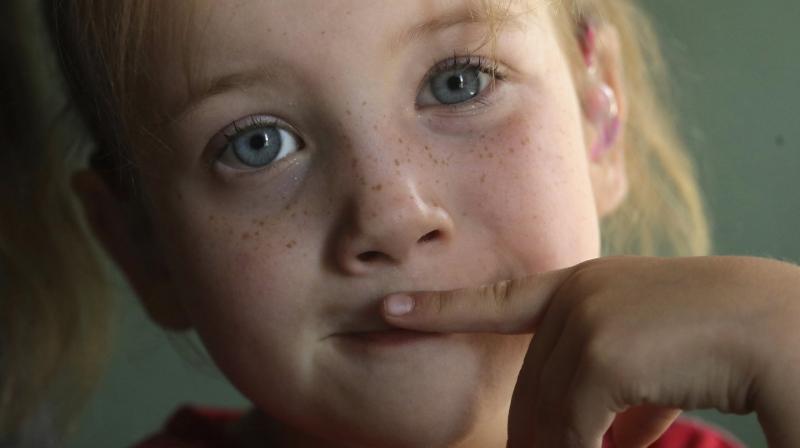 Intersex people are not to be confused with transgender. (Photo: AFP)

It turned out neither was exactly right. The blue-eyed baby was intersex, with both male and female traits. And so she and her husband decided to call the infant Victory. The name is a hope for triumph over the secrecy and shame, the pain and discrimination suffered by intersex people.

Amie Schofield knows those sufferings better than most: This was not her first intersex child. Some two decades earlier, she gave birth to another child whose body did not align with common expectations of boys or girls.

Schofield agreed to have that child undergo surgery that tipped the scales of gender to masculine. But the operation did not settle the issue of gender in the child’s mind or protect them from a savage beating decades later.

Now, with Victory, Schofield has been given an opportunity to try again. Her parents want Victory to be accepted for who she is; instead of changing Victory, they are intent on changing the world so it is more accepting of intersex people.

“What I hope is what every parent hopes for their kid,” Schofield said. “We don’t want her to look at herself and think there’s something wrong just because she’s different.”

Amie first married when she was young and had her first child more than 20 years ago. Instead of having one X chromosome and one Y chromosome, as men have, or two X chromosomes, as is typically female, the child had two Xs and a Y.

Intersex people are not to be confused with transgender. Intersex is an umbrella term for a number of conditions where internal or external sex characteristics aren’t exactly like typical male or female bodies. They are a larger group than is commonly acknowledged; estimates range from about 3 in every 200 births to 1 in 2,000.

“I’m convinced every single person on this planet has met someone who’s intersex,” said Georgiann Davis, a sociologist at the University of Nevada-Las Vegas who is intersex and is the board president of interACT: Advocates for Intersex Youth.

Some intersex conditions are known to run in families, though that’s rare for XXY chromosomes, said Dr Adrian Dobs, director of the Klinefelter Center at Johns Hopkins University School of Medicine. Not everyone with the disorder is considered intersex.

Doctors have long performed surgery and administered hormones to intersex kids to make their bodies more like typical boys or girls, but there’s a growing pushback. Five states have considered banning surgery until they’re old enough to consent, citing serious potential side effects, but most bills have stalled amid pushback from doctors’ groups who say the proposals go too far.

Amie took doctors’ advice and raised her first baby as a boy, agreeing to surgery to bring down undescended testicles. But the onset of puberty brought hips and breasts, something that didn’t go unnoticed by other teenagers in the small Idaho town where mother and child lived at the time.

“It’s not something I really thought about until they started making fun of me,” said Amie’s eldest, speaking on condition of anonymity because of fear of violence.

The teenager developed a kind of armour: binders and sports bras, then layers of shirts for bulk, followed by a jacket that never came off, all in a goth style to create a distraction. There were beatings, and the teen developed a strategy: Keep a straight face. Don’t scream. Don’t say anything. The startled bully might just back off.

Amie Schofield allowed her child to experiment with nail polish and dresses at home, but in the years after the fatal beating of gay man Matthew Shepard in nearby Wyoming, she was terrified to go public. She aches when she thinks about those years.

“I wish that we could have been open,” she said. “I wish I had understood more so that maybe I could have made it easier.” The move to Utah put the teenager in touch with other LGBTQ people, and for the first time exploring femininity publicly seemed possible. Instead of a beating, wearing a dress might earn supportive shouts like “keep doing you!”

That all changed one night in 2014. As they (the pronoun preferred by this person) walked to a Salt Lake City bar wearing a favourite tie-dye dress, a man shouted, “Where you going, mama? You’re looking pretty good in that dress!”

Never having been hit on before, they turned to say thank you. But the man’s face changed when he heard a deep voice that didn’t match that female body. He blew up, spewing gay slurs, and charged, weighted pipe in hand.

He landed a number of powerful blows. Blood sprayed everywhere before he fled, leaving the young person for dead. A large gash to the head was treated with staples at a hospital. Police investigated, but couldn’t catch the assailant, according to officials.