Demand for it helped put the creatures on the International Union of Conservation of Nature's "Red List" of endangered species in 2014. 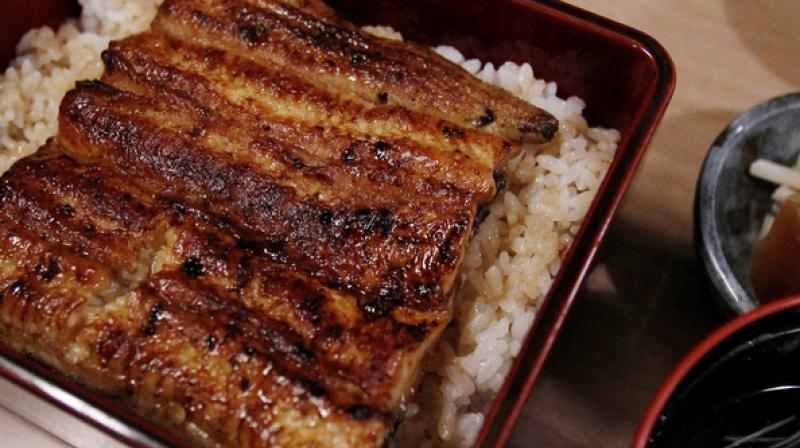 In this Aug. 2, 2017 photo, unajyu is served at Hashimoto, a Michelin one-star unagi restaurant in Tokyo. (Photo: AP)

Fujisawa, Japan: The Japanese summer delicacy of roasted eel, braised with a tangy sauce and sprinkled with prickly mountain pepper, is in question as the creatures with their mysterious migrations become increasingly endangered.

Soaring demand for Japanese eel, or Anguilla japonica, helped put the creatures on the International Union of Conservation of Nature's "Red List" of endangered species in 2014. It's spurring poaching of similar species off the U.S. east coast. But Katsumi Tsukamoto, "Dr. Eel" of the only "Eel Science Laboratory" at Nihon University in Japan, thinks he's unlocked the secrets to eventually farming the eels, known as unagi, sustainably and profitably. Tsukamoto found out where the eels are spawning, and that helped researchers study conditions needed to raise them from the egg stage to adulthood.

The possibility of extinction, and soaring prices for grilled eel believed to help build stamina for enduring sweltering summer days, have dismayed many Japanese gourmands and the restaurants that specialize in the dish.

Despite their important role in Japanese food culture, until recently very little was known about the life cycles of eels, such as where they spawned and how tiny, nearly transparent glass eels manage to travel back to their freshwater habitats in Asia and elsewhere. Supplies depend on wild-catching the juveniles and farm raising them until adulthood, a practice that has spread from Japan to Taiwan and mainland China as demand has surged.

Tsukamoto says his discovery of Japanese eel larvae and spawning adults west of the Mariana Ridge, near Guam, in 2009 has enabled him and other researchers to figure out the right diet and environmental conditions for spawning eels and their offspring. Despite skepticism about the potential for such farming to work, Tsukamoto says three Japanese state-owned laboratories already are able to raise the eels from the larval stage and get them to spawn, completing their life cycle.
But for now each lab can raise only about 3,000-4,000 a year. A lack of funds is hindering construction of the infrastructure needed to make such operations commercially viable by producing tens of thousands of eels a year. The complete farming of eels and some other endangered species as a way to help them survive by relieving the pressure from soaring demand.

Fisherman Masataka Uchida, who sells wild caught "blue eel," or ao-unagi, shrugs off any potential competition from farming. Depending on the environment, some eels have a tough texture and pungent, muddy taste that even unagi aficionados may find off-putting. Uchida's eels, with their pale blue-gray skin and soft pink bellies, have a highly sought-after, light and clean flavor that fetches premium prices even in the pricey unagi market.

Depending on the restaurant, Yuta Maruyama, an intermediate wholesaler who handles wild blue eel at Tokyo's famous Tsukiji Fish market, says a multi-course menu including grilled blue eel can cost up to 30,000 yen ($270) per person at exclusive restaurants, mainly in the flashy Ginza shopping and dining district.

The choice eels are often served in different styles to the traditional "kabayaki" eels which are grilled in a coating of dark soy sauce marinade. Restaurants that specialize in kabayaki, often handed down generation to generation, may offer both wild and farmed eels - with supply depending on what is available that day at the market.

At Hashimoto, a Michelin one-star kabayaki restaurant in Tokyo that first opened in 1835, the eels are all farm-raised the conventional way on the southern island of Kyushu, after being caught as glass eels. Like farmed salmon, the farmed eels raised from wild-caught glass eels tend to be fattier. "They have a flavor that is preferred by most customers," says Shinji Hashimoto, the sixth-generation owner.

Hashimoto says his kabayaki sauce is "light," to allow the eel's flavor to come through. "The Tokyo palette has traditionally disliked sweet flavors," he says. To manage with fewer catches and higher prices, Hashimoto tries to get two servings out of larger eels.

After cleaning and slicing them open, the cooks skewer them to ensure they will stay together while cooking. They are grilled directly over hot charcoal, then steamed to soften the flesh. Afterwards they are coated in a sauce of soy sauce boiled with sweet rice wine, or mirin and then returned to the grill and basted three times before being served as "unajyu," steaming hot over rice in a neat lacquer box.

The busiest days tend to be the Day of the Ox in the lunar calendar, the first of which in 2017 was Tuesday, July 25th. Hashimoto served about 150 customers that day. "Even if the price rose to 10,000 yen (about $90) for one box of unajyu, Japanese people would still eat it once a year," Tsukamoto said. "Why do Japanese people like unagi? Because we like soy sauce. The salty-sweet sauce, made from a mixture of soy sauce and mirin, is brushed on, is singed and grilled on the eel over charcoal - and that smell makes it irresistible.