Ditch the overcrowded pubs and spend an evening socializing with your kind of people at their home. 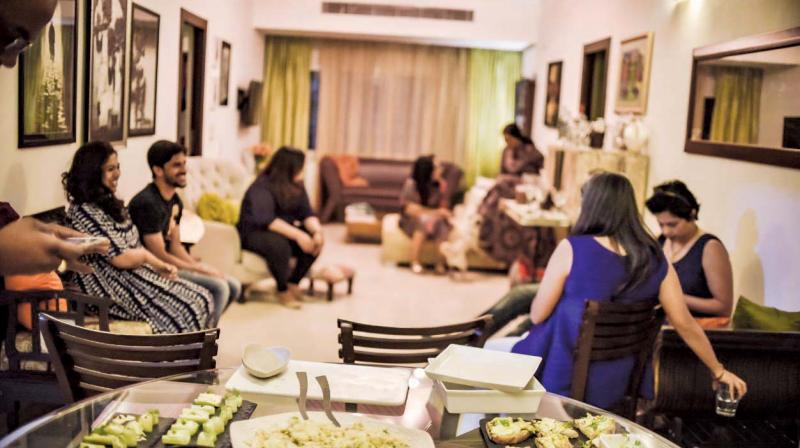 Our social life usually takes a back seat between the long working hours and the choc-a-bloc city traffic, resulting in the same bunch of friends hanging out at the same cafe everytime they meet. To  help escape this monotony and give city folks a rich experience, Arun Rafi came out with OpenOut, a unique home hosted social experience.

Elaborating about his venture, he says, “OpenOut is a platform where passionate folks around the city open up their homes and curate experiences.”

Arun adds how his own monotonous routine inspired him to launch OpenOut. “When I was in Bangalore, I went to these regular pubs, bars and restaurants with the same set of people, over and over again. It was then that something clicked and I thought I  should try something else. What if we could step into someone’s home? So we provided a platform for that,” says Arun.

The platform let’s the host organise various social activities around food, art and entertainment. From a musician whipping up a casual dinner with a promise of performance stories to trying a unique fusion cuisine of Manipur and Nagaland at a dinner, there’s a whole lot to explore. And according to Arun, diversity is what makes OpenOut unique.

One such host is Cheelu Chandra, a keto diet councelor, who has opened her home for people to try carb-free meals. Talking about her experience of hosting  an OpenOut event, she says, “I think it is a very interesting concept and in the few events that I’ve hosted, I’ve met very nice, warm and friendly people,” quickly adding, “At one of my event all the guest were single women. The interesting part is that these independent single women, kind of took the risk to come to a complete strangers house. It was a very nice bonding and now they are my new friends.” Cheelu plans to continue hosting at least one OpenOut every month.

OpenOut is not just an ordinary social gathering, that lets hosts and guests participate in different activities, it also gives opportunities to people to try out their passion in an economically viable way. Arun explains, “For people who are passionate or have expertise in something, this platform gives them an opportunity to take it further without any additional investments. They are running it out of their living rooms and that’s an obvious benefit. It also gives them chance to widen the circle around their passion.”

The platform that started in Bangalore has spread all over Mumbai and is actively functioning in the city since eight months. According to Arun, it is the presence of an eager host community in the city that is responsible for the concept to flourish.           “When we started out in Bangalore, it took us one and a half years to reach the level where hosts would come and sign up on their own. But surprisingly, while we did not have plans to open in Mumbai, there was a huge host community who found out about OpenOut though the web, and signed up even without us not being there. That’s how we decided to start in Mumbai,” says Arun. The first OpenOut event saw a guest list of 18 people with a 60 year-old-host. Recalling the event Arun says, “The fact that 18 people came to the event with just a Facebook post, gave me the confidence that this would work.” And since then, he hasn’t looked back.

Arun is now focussing on growing the community in Bangalore and Mumbai, but plans to venture into Pune and Delhi in future.