The video offers a glimpse into the lives of lesbians and the struggles they face at very, many important points of their life, like getting married. 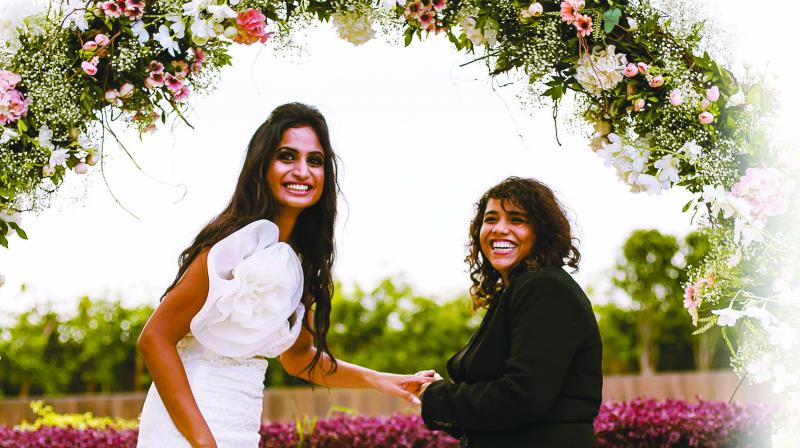 Deeptii and Monisha in a still from the video

Bracing herself, she talks to her mother who wishes her good luck through a video call and at the end of it, she walks down the aisle to marry the ‘woman’ of her dreams. The video Love, No Boundaries speaks lengths about same-sex marriages and the significance of the same in contemporary society. The video which has been recently uploaded on Facebook is going viral, and has already crossed 96k views. Bengaluru-based model and budding artiste Deeptii Mohan who has played the role of the bride shares her experience working for such an unconventional theme.

“I had to work hard on getting the right emotions to see a girl as a groom and feel happy and behave the same in front of the camera. It was a challenge for me as a beginner but the team was very helpful and accommodative. When I chose to take up this project, I was sure that it’s going to be a path-breaking one in my career. The happiest part is that many of my friends who are in same-sex relationships were overwhelmed to see the video and they felt it was a welcome change,’’ said Deeptii.

For every woman, her ‘big day’ will never fail to be an adrenaline-fuelled rollercoaster ride of emotions. You watch yourself morph into a sob-fest mess — irritated with bridesmaids, sullen about decor, the list goes on. A whirlwind of emotions and excitement along with a bunch of blabbering bridesmaids enveloping you is a common scenario at wedding day mornings. But the bride in the video Love, No Boundaries directed by Archana Thapliyal was sitting aloof in a dimly lit room, tension and nervousness enveloped her in place of the bridesmaids.

The video offers a glimpse into the lives of lesbians and the struggles they face at very, many important points of their life, like getting married.

“The fact that the video gave voice to a lot of people who could not voice out their likes and dislikes was a major reason that prompted me to take up this bold and unconventional project. Apart from that, the whole team was very creative and I had fun working with them,’’ said Deeptii.

Monisha Ajgaonkar, who put forward such a concept, says that the video primarily focuses on the fact that same sex marriage is just the same as any heterosexual marriage, and it is the union of two souls that love each other, without boundaries and it has nothing to do with gender.

“I believe that as there is such little knowledge and recognition for the lesbian strata of society in India, a lot of women are afraid to express their sexuality, and often stay in the closet and, stay unhappy. As a member of the LGBTQ community, I have been actively propagating the recognition needed by the lesbian community, and thus I ideated and conceptualised this project,’’ said Monisha.