The next concert was by Waseem Ahmed Khan, grandson of Ustad Ata Hussain Khan of the Agra gharana. 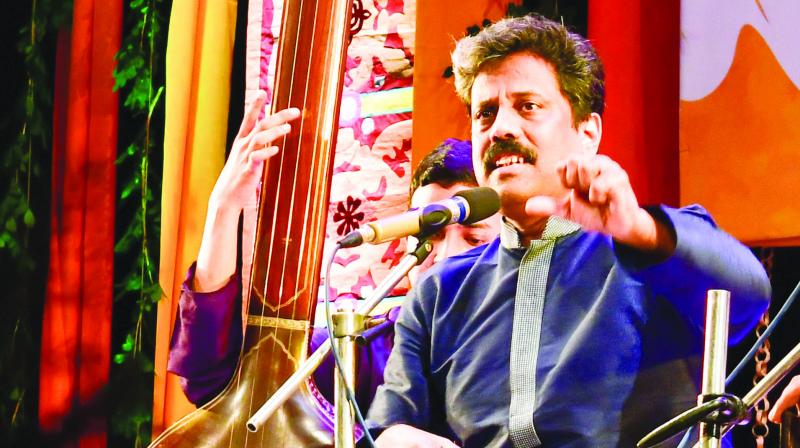 Kolkata is truly the Mecca of Indian classical music with several concerts happening at various venues throughout the day, in the season. Nevertheless, the eagerly awaited annual Paramparik day-long festival saw a full audience throughout the day, despite other concerts in the city at the same time.

The opening concert was an unusual one: Carnatic mandolin by U. Rajesh, brother of the late iconic Vidwan U. Sriniwas, with Sandip Chatterji on santoor. Surprisingly, this unusual combination (one would not have thought the bass sounding mandolin could musically synchronise with the silvery tones of the santoor) was pleasant on the ears. Combination concerts by Carnatic and North Indian musicians usually stick to Carnatic ragas, which have been adopted into the North Indian pantheon and this concert was no different, with raga Hemavathi being the main piece. Sandip held his own with fluid ease, impressing with his virtuosity; he is an able disciple of Pandit Tarun Bhattacharya of the Senia Maihar gharana. On the tabla, keeping crisp pace with grace was Subhajyoti Guha of the Punjab gharana.

The next concert was by Waseem Ahmed Khan, grandson of Ustad Ata Hussain Khan of the Agra gharana. It was a pleasure to hear his 30-minute, meticulously executed dhrupad style aalap, his excellent training clearly evident, with no short cuts or resorting to lighter embellishments prevalent in khayal gayaki. The raga, Purvi, is a distinct one, and needs careful handling in its presentation as it can easily veer into other similar ragas — Waseem proved his mastery. The two traditional much heard khayals he sang (“maiyya mori paar karo” and “mathura na jayeeo Kanha”) were dealt with carefully; one admired Waseem’s use of controlled volume during the execution of the typical Agra “taans” in both octaves. His next raga was the rare Dhanashri, which is nearly extinct now; he sang two khayals, one of which was a composition of the great Ustad Vilayat Hussain Khan, who was looked upon as an encyclopedia of old bandishes. His pleasantly rounded deep gravelly bass voice, soaring with ease and with the same roundedness even in the higher octave was a delight.

The next concert was the highlight of the festival, featuring as it did two masters of percussion, Vidwan Sathish Patri on the mridangam and Pandit Subhankar Bannerji on the tabla accompanying Vidushi Jayanthi Kumaresh on the saraswati veena. The music loving audience of Kolkata has always put their percussionists on a pedestal; in fact many have opined an earlier generation of tabla players of Kolkata have now created a new style, which can be called the Kolkata gharana of tabla. Jayanthi, who is a highly intelligent performer who carefully crafts her concerts, wisely focused on the accompanyists; her opening piece was in raga Amritavarshini, in which, turn by turn Sathish and Subhankar kept the rhythm, Adi taal. The next piece was raga Vasanta, whose counterpart with the same notes and name is raga Basant in the North Indian tradition. However, the two ragas are totally different from each other and have scarcely any resemblance to each other. In Vasanta, the “taal” was “rupak”, and in this the adroit Jayanthi kept the focus on her accompanyists by fast-paced “sawal jawab” with each. The next piece, which was the main piece, was in raga Kirwani, and Jayanthi executed a beautiful “aalap” and “thanam” or jor/jhala. Next was her self composed composition with its intricate note structure and “laya”, which kept one totally engrossed; but again she reined herself in to let the focus remain on the two masters during the prolonged “tani avartanam”. This was breathtaking, with each protagonist excelling himself in presenting tautly executed pieces. Sathish Patri’s artistry on the mridangam is not mere mastery of “taal”, his mridangam actually sings. This concert actually left one feeling breathless as it was so packed with exciting moments and wonderment. One of the organisers, Partha, later shared that, “I had requested Jayanthiji to play a slow composition of Muthuswami Dikhshitarin raga Poorvi Kalyan that had inspired Rabindranath Tagore’s robindrasangeet with the same note structure as I thought many in the audience would be amazed,” but Jayanthi correctly decided to let the focus of the concert be on the “laya” rather than the melody. In her words: “I am sitting between two lions so I should let them roar.” She ended with a lilting folk melody in raga Bihag.

The concluding concert was by Pandit Raghunandan Pansikar of the Jaipur Attrauli gharana, who expectedly started his concert with his late Guru Padma Vibhushan Kishori Amonkar’s signature raga, Bhoop. Unfortunately, this writer was not able to hear the full concert.

In addition to promoting classical music, Paramparik has been doing yeoman work in working with underprivileged children in giving them access to professional education; some 8,000 children over the years have benefited from this. It was a pleasure to hear three children announce the artistes’ details before each concert, rather than the slick announcement of a professional host.

What stood out at this festival was the meticulous attention to detail; from unobtrusively concealing the sound monitors on stage, to the elegant understated muted coloured backdrop. The current trend nowadays of neon multi-coloured lighting, and prominently displayed flashy sponsors’ details detracts from the music. The careful artiste selection with variety as well as worth was admirable.