A photowalk aims to bridge the cultural divide between city residents and the adivasi culture. 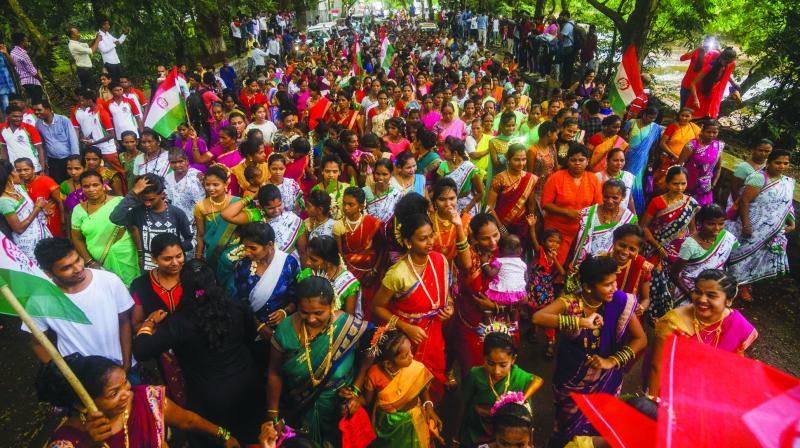 Not known to many, the Sanjay Gandhi National Park (SGNP), houses as many as six to seven padas (settlements) and has about four thousand adivasis (tribals) living there. The tribal people of Madhav Koli, Kokna, Dupli, Dhodi, Warli, and Katkari, who are one of the earliest and the foremost residents of Mumbai, now face major threats of displacement. On this UN declared World Indigenous People’s Day celebrated on August 9, thousands of the city-adivasis took upon themselves to celebrate their existence and might of the forest-dwellers along with the residents of the concrete jungle.

On a photowalk organised by environmentalist and a street photographer Sanjiv Valsan, and Aslam Saiyad, a documentary photographer and a researcher, about twenty-two Mumbaikars, along with the duo, joined the tribals from SGNP to Aarey Forest in their celebration.  For Sanjiv, who first came to form a friendship with the tribals during his work at the Aarey forest, the aim for arranging the photowalk was beyond just photography. He says, “City people don’t even know that there is a forest in this city, let alone about the forest-dwelling indigenous people. This is more about learning than photography. The aim of these walks is to bring city people to these events and it’s a way for the urban and tribal people to connect, without actually knowing that they are connecting. Camera just acts as a social glue.” He adds, “What we also want is for the city people to understand the importance of forest to tribals; tribals to forest; and the forest and tribals to us.”

The walk that started from the gate of SGNP, took a serene route inside the national park, passing various creeks and ponds, a troop of monkeys, a group of school-going girls to reach Navpada, a Warli settlement. Dressed in a bright pink and purple sari, the gajra clad Nalini Bujad, the head of the Mumbai region of Shramjeevi Sangathana, a tribal organisation fighting for their rights and demands, greeted the explorers. She then led the walk to an ancient Vaghoba (the tiger god of Warli) temple, where she offered prayer to commence the festivities. Talking about the celebrations, she says, “Even though the country is independent, the adivasis living in the 222 padas of Mumbai are not free yet. We are facing many issues because authorities refuse to acknowledge us, and people don’t even know that we exist. This celebration is a symbol of our existence and our strength.” The Adivasi population comprising of almost four lakh people resides in the 222 padas in the city, including in the 10 padas in SGNP, 27 in Aarey forest, and remaining in Boisar, Madh island and all across the city. 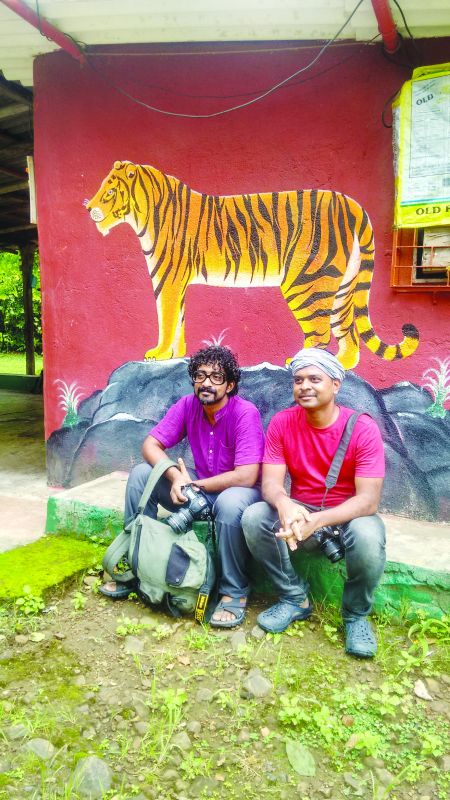 She goes on to elaborate the issue of tribal validity as one of the major problems. She rues, “The earlier governments have claimed that Mumbai doesn’t have an adivasi population, so the government is asking us to produce documents dating back to at least 50 years. We didn’t have access to hospitals back then, deliveries used to happen at home. We didn’t study at school as well.  So where do we get the certificate from?”

The festival which commenced from Navpada, involved the matriarch-appearing Nalini offering prayers to a tractor, which then led the march of dancing tribal women, men and children till the gate of SGNP, where they performed the Tarpa dance, similar to the concentric dance formation often spotted in Warli paintings. The march ended at Birsa Munda Chowk at the Aarey forest, where they paid a tribute to their freedom fighters, and continued the Tarpa dance accompanied to the tunes of Tarpa instrument.

For Aslam, who often finds himself taking a walk inside the park, and having tea with the tribals, there is a dire need for the people of Mumbai to discover the tribal culture that is in the midst of their geography. He says, “ We don’t have culture, and they are deeply rooted in theirs. We are not connected with them, and somewhere we have lost them. This photowalk is to bridge this cultural divide and burst the myths of the city people regarding the adivasi culture.”