Most Varanasi ghats were rebuilt after 1700 AD, when the city was part of Maratha Empire. 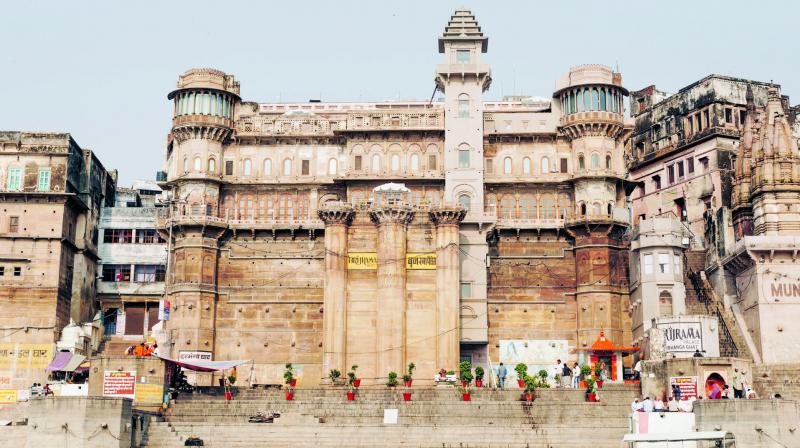 The most visited ghat of Varanasi is the ‘Dashashwamedh Ghat’, located close to the famous Vishwanath Temple.

If you ever wonder what is like to live an unrestricted life among the complexities of everyday humdrum, consider a trip to the famous ghats and galis (lanes) of Benaras. The riveting ceremonies of birth and death happen on the Ganga ghats almost side-by-side; bringing into focus the eternal truth of human life. If you are interested in learning more about the Hindu religion and observing it closely, the holy month of savan (monsoon) is a good time to visit. Most of the modern-day ghats that we see on the Ganga bank were rebuilt after 1700 AD, when the city was part of the Maratha Empire. The royal patrons of ghats were kings from the Shinde (Scindia), Holkar, Bhonsle, and Peshwa families, who rebuilt the riverfront with stone slabs. Above the tiers of stone steps, one can see ancient shrines and royal palaces built close to each other.

Among the many famous ghats of Varanasi is the Darbhanga ghat, on which you’ll see the majestic 18th century fort, Brijrama Palace, overlooking the river Ganga. Popular as one of the oldest forts built by the royal house of Nagpur, this palace is an excellent example of the Maratha architecture displayed splendidly on the Darbhanga ghat. In the early 20th century, the fort was acquired by the Maharaja of Dharbhanga (known as the Brahmin King of Darbhanga (Bihar) ‘Rameshwar Singh Bahadur’). He renovated this building by incorporating elements of Greek architecture and installing the first elevator in South Asia in the year 1918. It is a monumental building that boasts the design confluence of Maratha architecture and European art across the luxury property and currently functions as a boutique hotel.

According to the caretakers, the current owners (1589 Hotels) took 16 years to renovate the property and it became operational for guests in the year 2016. The palace still uses the first elevator of India to carry the guests into the lounge, which offers a beautiful view of the river Ganga. As one enters the lobby, it leads to the ‘Bada Aangan’, which is built as a traditional lounge where classical Benarasi musicians and dancers perform live at evening soirées. The entire building is made of sandstone, which gives it a typical pinkish complexion and works as a natural coolant on hot days. The walls are ornamented with elegant mirror work and pillars with engraved floral vines accentuate the regal feel of the palace.

While the stay at Brijrama is an experience to remember, one cannot miss out the nearby attractions that come along with the advantageous location in the heart of the old city. According to the locals, there are 84 ghats on the bank of holy river Ganga that form a necklace-like structure around the pilgrim city. One end of the ghats is called the ‘Assi ghat’, while the other end is known as the ‘Rani/ Adi Keshav Ghat’ ghat. Among these holy ghats, most are frequented by devotees who come for bathing in the river and perform pooja ceremonies at the banks, while two of them (‘Manikarnika’ and ‘Harishchandra ghat’) are used exclusively for cremation platforms.

The most visited ghat of Varanasi is the ‘Dashashwamedh Ghat’, which is a popular tourist site as it is located close to the famous Vishwanath Temple. It is believed to be built by Lord Brahma to welcome Lord Shiva, and every evening the famous Ganga aarti is conducted on this ghat to worship fire, the universe, Lord Shiva and river Ganga.

If you are visiting the ghats of Varanasi for the first time you might be overwhelmed to observe the sacred rituals that are performed next to the river without any precincts. The pollution in the river and heaps of dirt on the riverfront might deter you to explore the various nooks and corners of the old city initially, but once you imbibe the spirit of the place and get used to the sights, sounds and smells in the eclectic atmosphere you will be able to the witness the wonders of the oldest living city without any reservations.