We are name changers

What is happening now in UP is total rewriting of history on religious grounds as Muslim and Mughal names are being removed to make way. 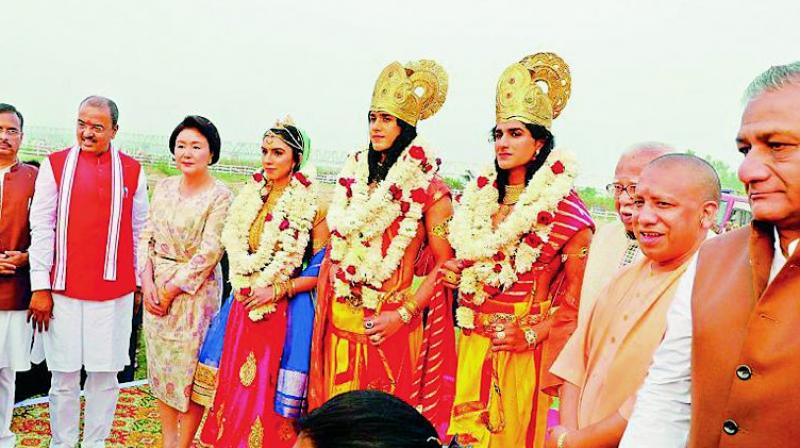 Name changing is the name of the game. Everyone has played this in India at some time or the other. Uttar Pradesh is doing it with a vengeance now with mass changes to names of old cities and regions.

Name changing is the name of the game. Everyone has played this in India at some time or the other. Uttar Pradesh is doing it with a vengeance now with mass changes to names of old cities and regions. As someone tried to explain — “Ayodhya was in Faizbad dt. But now Faizbad is Sri Ayodhya and so Ayodhya is in Ayodhya, do you get it?” And soon there may be a Ram airport when the Lord’s terminal would be competing with the likes of Indira Gandhi International and others around the country named after full time politicians. There may have been valid reasons for some name changes as India emerged an independent nation and wished to drop British names to remove vestiges of the colonial era. What is happening now in UP is total rewriting of history on religious grounds as Muslim and Mughal names are being removed to make way, like Allahabad turning into Prayagraj. It is moot whether history can be obliterated or rewritten with just a name change. But that will not stop modern day politicians from trying to derive every advantage from the things they can do to retain or capture votebanks.

The habit is proving infectious enough for Ahmedabad to nurture the ambition of changing to Karnavati and Simla, which became Shimla, to change to Shyamala. Soon you may need a constantly updating app rather than an atlas to know places and their names as Aurangabad and Osmanabad await their turn to be baptised again. The name change merry-go-round, which some see as a diversionary tactic, is spinning quickly enough to be bewildering.

Subramanian Swamy@Swamy39
If Anantnag can be renamed by PDP as Islamabad, the party too should agree to renaming Ahmedabad as Karnavati, and Allahabad as Prayag

Manimugdha Sharma @quizzicalguy
So Faizabad, the erstwhile capital of the great Nawabs of Avadh, has been renamed as ‘Sri Ayodhya’. Does Uttar Pradesh have a functioning government or did the people elect a comedy circus to provide some sick entertainment? Absolutely shameful!

Mahesh Vikram Hegde@mvmeet
Only and only a Ram temple will be built in Ayodhya.
Faizabad district will now be called as Ayodhya
A Medical College by the name “DASHARATH”
And an Airport after the name of “LORD RAM”
These were the prominent decisions taken by Yogi Ji in Ayodhya
DEEPAVALI
SAFFRONISED

GANDHI@Gandhiibapu
How intelligently BJP diverted everybody’s attention from Karnataka’s by-poll results. Changing names can temporarily hide your defeat but will never cover up your failure as government!! Jai hind

Elina@Elina41494028
People don’t hate the fact that the names are from hindu mythology. It’s just that they can’t wait to see the infrastructure grow as an effect of the name change

Thenysh@kkashaan
Actually this isn’t sad at all! They just can’t help themselves as they don’t have any other imp thing to do.This way they have found a way to divide public’s attention from core matters which are imp for the well being of the society

Shashank lara@shashanklara
If yogi was CM of TELENGANA Hyderabad would have been probably renamed Bhagyanagar! #Faizabad

Prakriti Yadav @Prakriti_99
Renaming districts & talking abt a Ram mandir is the easiest thing.  U don’t need to lift a finger & boom it looks like u hv done something. It’s not like the country needs infrastructure, devpt, education, freedom from malnutrition or women’s safety anyway

Rana Safvi  @iamrana
Faizabad was a separate city. It had its own distinct identity and boundary from Ayodhya so renaming it is an attempt to erase the Nawabi history.

Ankur Kumar Singh @Ankur_Kumar
There’s a RAM in Ramadan as well. That paves the way for RAM MANDIR in Ayodhya then!?!

Writer_KK @Writer_KK
We need a strong opposition until then we will just get new statues & new names.. #Faizabad

TheAgeOfBananas @iScrew
Would all the freedom fighters like Maulana Azad, Ali Brothers and Khan Abdul Gaffar Khan’s names be changed too? #Faizabad

Roshan Rai@RoshanKrRai
What’s in a name? — William Shakespeare. A lot is in a name. — Yogi Adityanath

Booby prize
Virat Kohli has found himself in trouble by annoying a lot of cricket fans in India by responding to a countryman in an unexpected way. In a video from his newly launched app, a fan tells the Indian skipper that he is just an overrated batsman and there’s nothing special in his batting.

“Overrated batsman and personally I see nothing special in his batting. I enjoy watching English and Australian batsmen more than these Indians,” said the fan.
Virat was to retract somewhat later by saying that he is all for the freedom of choice and that he has an open mind. Truth is he did not emerge too well from the entire episode, primarily because he spoke out in anger. Rather than thinking over it and replying in a calm way as he should have, Virat being a public personality and the second most important job in India after the Prime Minister.