When the ghunguroos fell silent 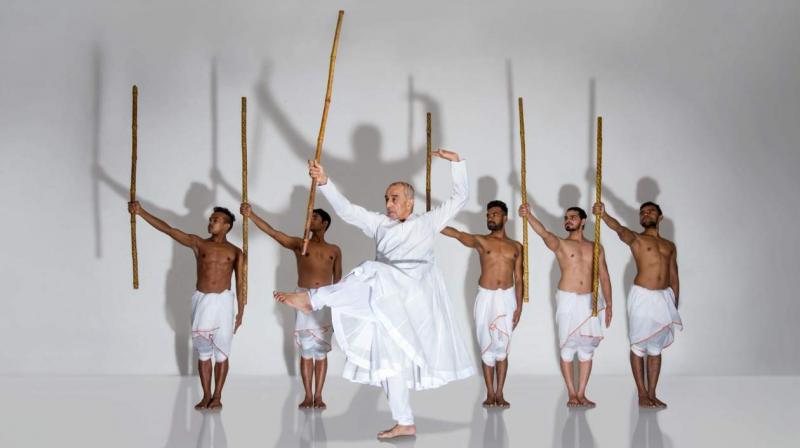 Astad Deboo the dance icon who seamlessly brought together Kathak and Kathakali as an ensemble art form, left millions of fans and friends grieving when he passed away in the early hours of December 10, in Mumbai.

Seventy-two-year-old Deboo fought his way with sheer talent and grit to a meaningful place on the list of India’s best-known dance icons, challenging the power and prejudice of ‘sabhas’ along the way. With flared dhotis and attractive angarkhas, he brought magic to his dance form.  As a six-year-old boy, Deboo was sent to learn Kathak. In 1969, when he was 20, he boarded a cargo ship at Bombay Port, and embarked on a journey to see the world while pursuing his passion for dance. He hitch-hiked his way through Europe and went further afield, to eventually reach New York in 1974. Over the next decade, he attended the London School of Contemporary Dance where he learnt Martha Graham’s modern dance techniques, and later studied José Limón’s methods in New York. He also trained with Pina Bausch in the Wuppertal Dance Company, Germany and with Alison Becker Chase of the Pilobolus Dance Company. After travelling across Europe, the Americas, Japan and Indonesia, he returned to India in 1977. He studied Kathakali, under Guru E. Krishna Panikar, in Thiruvalla, Kerala and performed at the Guruvayur Temple. He has also performed alongside Pink Floyd.

We shall miss him

I cannot even begin to express how I am feeling right now! It is a gut-wrenching feeling. A month ago my phone rang — and seeing his name on the screen I jumped up to answer. He was always his jovial warm self. Despite his struggles with Cancer and the Chemotherapy he smiled and brightened our conversations. He got emotional once as he realised he was missing his friends due to the intense treatment and the pain of the disease. I’m feeling numb and hurt at his passing.”                                 —Ramaa Bharadvaj, dancer

Astad Deboo charted an individualistic path — dramatic, colourful, creative and supremely confident of his iconoclastic role as a theatre magician. He leaves a larger-than-life legacy of dance as an intense artiste who crossed man-made barriers, not just of dance and theatre genres but also as an international artiste who has crossed national frontiers. He was a game-changer.

I’ve known him for 40-odd years. He was a truly generous human being. No malice, no disgruntlement but a lovely sense of humour. I will miss him.”

Astad Deboo’s favourite song was Rabindranath Tagore’s Ekla Chalo Re. Like the refrain, he too walked alone, braving criticism, cynicism and challenges. He is an icon for Indian dance and a Lunesta that defined daring and dreaming. His six decades of continuous work across continents and cultures has touched multiple fields — performance, fashion, photography, special needs, music, and street children. There will never be another like him. I am privileged to call him my friend.

Losing a friend like Astad is deeply disturbing. His voice when we spoke a couple of weeks ago and he talked of his passion for dance, still rings clearly. We have lost a dearly-loved artiste and friend.

The news is devastating. The iconic, amazing, ground-breaking dancer and the most wonderful human being has gone. He blazed a lonely but fantastic trail in the dance sky. Where is the dance, when the dance body is gone? These words have been troubling me since I heard this terrible news.

Astad, a sensitive artiste, a sensitive human being. His work spans a whole era — when there were very few artistes on the horizon, he pushed the boundaries of contemporary dance in India. New ways of dancing opened up for future generations. Astad was unstoppable, his spirit was large and generous. I shall miss our phone conversations full of his warmth and enthusiasm.

With the passing of Astad Deboo, India has lost one of the modern pioneers and legends of contemporary dance. Dancing right to the end, he was an inspiration to many. His generosity, service and contribution to the art will be remembered forever. He will always be known as one of the great artistes who took indigenous arts onto the world stage through his innovative genius. Astad Deboo, you will never be forgotten.”

From Graham to the Gods of Kathakali and beyond, if Astad bent rules of lines and moves, and twisted and knotted himself, it was to find a language for his awkward but deeply loving relationship with dance ’traditions’. Astad loved Dance, you see, but not the ways she was taught to express herself; Astad recast her as a muse to the ordinary and the un-ordinary, not just the ordained. I will miss him as I miss my charmed youth