More than just a drive

The Blind Man Rally encourages Braille-reading navigators to team up with seeing drivers. 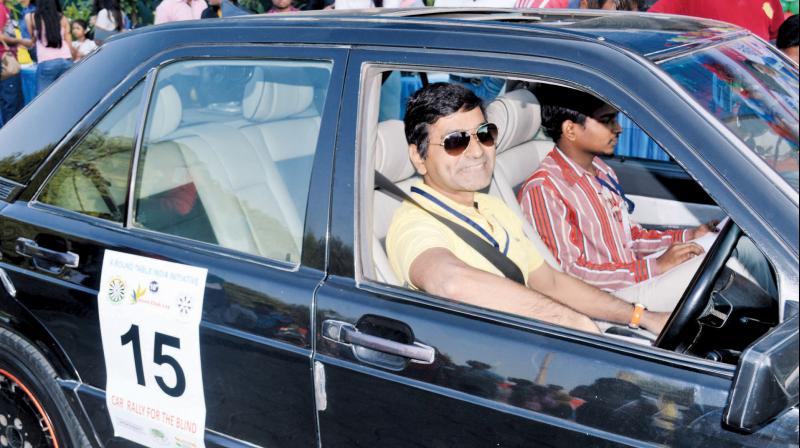 Thirty-five year old Jeevan Roy eagerly waits the month of February each year. For a special Sunday in the month each year, the visually challenged administrative officer with an insurance company puts on his adventure hat, and turns into a navigator for a drive.

The Blind Man Car Rally, an annual event held Round Table India (RTI), is now in its 11th year in Mumbai. It brings together visually challenged navigators and drivers with sight for a spin around town. While the driver steers his way through the winding roads, teeming with traffic, the navigator reads the route off to the driver, with a Braille map in hand. In tow in the cars, are the families and children of the navigators and drivers.

Viral Kedia, chairman of RTI 2, explains that the motive behind conducting this rather intriguing rally is two pronged. “One reason is to create awareness about blindness, and the difficulty visually impaired persons face in day-to-day life; the other is to raise funds that are used to create in school programmes to create infrastructure for underprivileged students.” Viral adds that this edition will see about 120 participants taking to the streets, and that actor Sohail Khan is set to flag the rally off.

Jeevan reveals that he got hooked to the rally even as he participated in it for the first time in 2012. “Earlier, I had been busy with my MBA studies, but then I decided to take part in that edition. Back in the year, there were 88 cars, but I managed to come in third,” he grins. “I have enjoyed guiding my partners through the roads, and it’s been a wonderful experience. Not just me, even other navigators have fun,” he explains.

Besides the fun quotient, the rally is a serious job that requires a good amount of teamwork too, reveals Rufina Karmali, who has been a regular attendee of the rally, and drives with navigators. “Teamwork is essential for this rally. You need to have a rapport with your partner to understand what they’re saying. There’s no road in front of them, but it’s in front of you. So, if they say take a left turn after 30 metres, you need to calculate if it’s actually 30 or 35, depending on how you’re driving, whether that road is a one way street or not.”

She laughs as she recalls the multiple times her navigators and she have lost their way, during the multiple editions. “Oh, we get lost many, many times. You need to go back and retrace your steps, start off from the last checkpoint. Then we speed up to catch pace.”

However, isn’t it dangerous for cars to be speeding with children in the backseat? Rufina laughs, “It’s not risky at all; it’s a slow rally so the the speed is not too high. In fact, the rally is more to encourage interactions between families, as well as the driver and the navigator, especially the children. Kids sometimes don’t understand what life is like. For my two boys, observing and interacting with the navigators over the years has been a life-changing experience.”

Jeevan laughs as he fondly recalls all the friends he’s made over the years. “We start talking to the drivers when we’re introduced to them and the conversations build up slowly. I love making friends, so this is a great chance for me to make some more. We usually call up each other and meet up even after the event is over. If you don’t get a rank, it’s still all about the fun,” he concludes.

The Blind Man Rally is being flagged off at NSCI, Worli at 9 am today.