An ode to Love 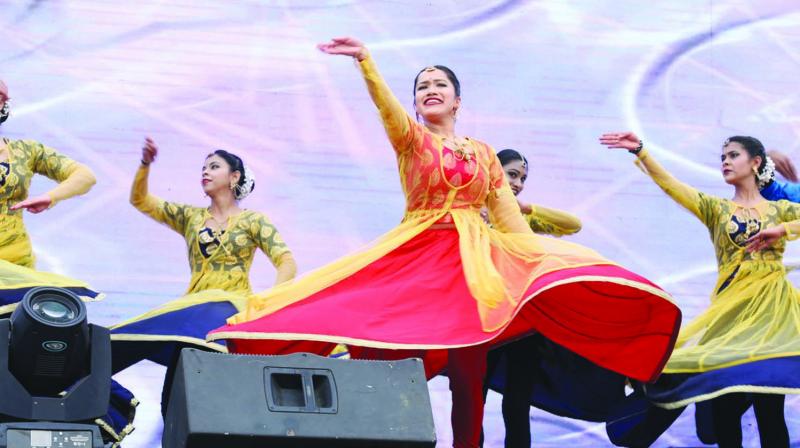 Amrita Sarkar, a trans-rights activist feels that pride marches are organised with an aim to show solidarity within the LGBTQ community.

The sun smiled at last with a tinge of breeze on what seems to be a cracking of a day. To add to it, it was pre-Valentine’s Day celebrations.

A carnival titled, Hum Tum was organised by Diva by Deepika in collaboration with Harmless Hugs & The Quart Project (a Delhi Based LGBTQ+ Collective). It was Delhi’s first ever queer carnival which took place at the Dhyanchand National Stadium on Sunday. The event featured fashion shows, sing along, open mic, Zumba along with qawwali and drag performances (dance performances by a drag queen).

The event was organised in order to celebrate the landmark moment of September 2018, when a five-judge constitutional bench of the Supreme Court unanimously ruled in favour of homosexuality. The aim of the event was to create awareness of the challenges faced within the LGBTQ community and provide an exciting opportunity for them to share their talent with the society. Through this colourful event, we hope to bridge the gap between the LGBTQ community and rest of society. The event also discussed employment opportunities for Transgender and other sections of LGBTQ community. It also spread awareness for HIV, its prevention and better health through the HIV awareness and prevention campaign.

Amrita Sarkar, a trans-rights activist feels that pride marches are organised with an aim to show solidarity within the LGBTQ community. She however feels that events like this one (the carnival) are important in order to take a break as well. She feels, “Equality is the ultimate colour of love. In any feelings of the mind, if there is no freedom of expression, then it is incomplete.” She further goes on to say that inequality is everywhere. “Even at the family level, at education we (trans people) do not have specific job opportunities. Even after reading down section 377, people are still getting killed”, she expresses her concerns for the transgender community and the inequality in the (LGBTQ) community.

She believes that transgender issues need to be mainstream and goes on to say that one cannot keep putting “these boxes”.She stresses on gender neutrality and believes that inclusiveness and sensitisation is the way forward to move in society. Being a transgender activist for almost 20 years, she says, “I believe it is an ongoing issue.” She goes on to explain about her first group project involving hijras and kinnars in Odisha where she was addressing issues like education and hygiene.

“HIV/AIDS is the main issue but, it is not everything. We have to talk about education, livelihood.” She highlights the various issues trance people face in hospitals, educational institutions etc. “The youth can be a part of the movement. They can be in the front of it. But there is a very big hole in our system. They (educational institutions) do not have a gender and sexuality related topics in the school curriculum”, she says when asked about how youth can play a role. She goes on to add, “If we give them more information and awareness, the adolescents, the youth can help us.”

Vineeth Verma in his artworks has highlighted the regular life of people. He says that he listens to people stories and draws inspiration from them for his art. “To me colour does not matter as much Because I love doing something with pain. Most of my work that I do is in pen.” He speaks about the education of touches, “I will always seen that parents teach what is the good touch and bad touch. But then, parent should also teach what is a touch between two same genders and what is the touch between two opposite genders.” He goes on to add that kids need to be shown both sides of homosexuality rather than just one side. He believes that kids should be given the choice to choose .