A hub of spirituality and culture

The Thyagarajaswami Temple in Thiruvarur is a popular pilgrimage spot. 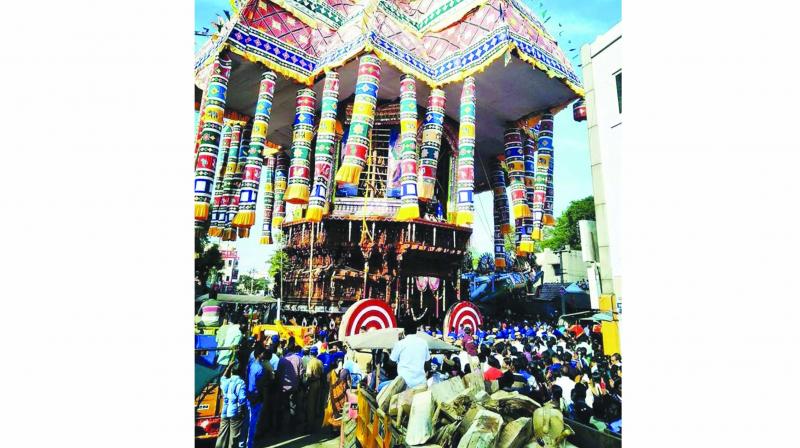 However, it is a place that is brimming with spiritual significance.

Thiruvarur is not a name that comes to your mind when you consider Tamil Nadu, its social legacy, temples and convention. However, it is a place that is brimming with spiritual significance.

The sprawling Sri Thyagarajaswami Temple is the highlight of the place. Its legacy speaks a lot about the significance of the cultural town of Thiruvarur. Even though Sri Valmikanthaswami is the main deity, the temple owes its name to Lord Thyagaraja, who is a unique deity of this temple. This temple also holds the record of having the maximum shrines in India. It takes at least a full day to see all the important features and shrines of the temple.

The temple’s annual chariot festival is held between March and April. On the day of the festival, the uthsava moorthi is beautifully decorated and brought out of the temple along with his consort to the Great Chariot. Nearly 10,000 people are needed to pull the chariot.

Thiruvarur is the birthplace of the Carnatic music trinity — Syama Shastri (1764-1827), Thyagaraja (1767-1847) and Muthuswami Dikshithar (1775-1835). The houses in which they were born were later acquired by a trust that built memorials for them at the spot.

Manuneethi Chola
King Manuneethi Chola also once ruled over this land. It is said his son killed a calf inadvertently under his chariot. The mother of the calf sought justice and the king punished his son in the same way the calf was killed. A stone chariot is present in the temple with a lively expression of the calf.

Reaching there
The Ernakulam-Karaikal Express stops at Thiruvarur. From Kochi, Thiruvarur is 520 km away and from Trichy it is 117 km away.