In a ‘World First’, frostbitten cat fitted with new limbs

Ryzhik, a cat from Siberia was fitted with Titanium paws after its paws had to be cut off after contracting gangrene. 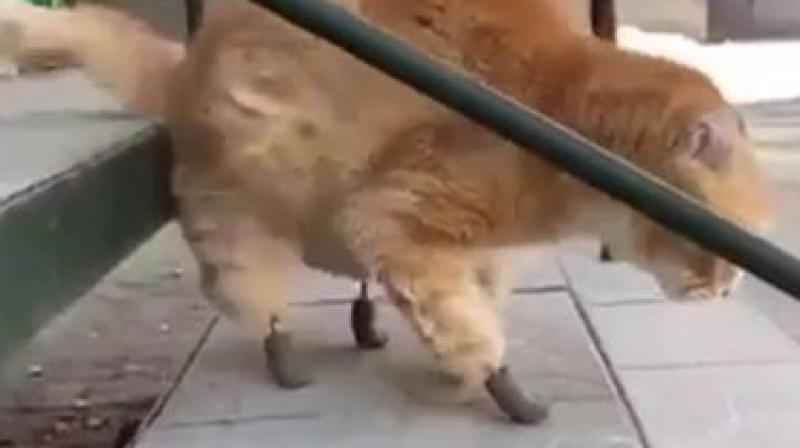 The paws were created from computer tomography and 3D modelling. It is believed to be a ‘world’s first’. (Photo: Screengrab from East2West)

A cat, Ryzhik, in Siberia had to have all of its paws amputated after suffering from a frost bite. The cat was abandoned out in the severe -40C temperatures in Siberia. The poor cat contracted gangrene and thus all its paws had to be cut off before it spread.

Normally, under such circumstances, the cat would have been put to sleep. But the new owners of Ryzhik were adamant to save him. They took the cat all the way to a clinic in Novosibirsk, Russia to give him a new lease of life. The clinic there fitted Ryzhik with artificial limbs made from Titanium. The paws were created from computer tomography and 3D modelling. It is believed to be a ‘world’s first’, reported the LADBible.

"He is definitely the first cat in the world who experienced such surgeries. The limbs have fully connected with the skin and bone. "The part of the limb that goes inside the body is spongy, the bone tissue grows inside it," said Sergey Gorshkov, the vet who worked on the Ryzhik.

Though Ryzhik is right now a little unsteady on his feet, the vets firmly believe that he will eventually get used to the new paws and walker more easily. The fact that the cat hasn’t tried to pry off the paws is also indicative that he isn’t uncomfortable in the new limbs.