The ladies like to keep the first half of the show light; in the second half, they delve into topics that are serious and controversial. 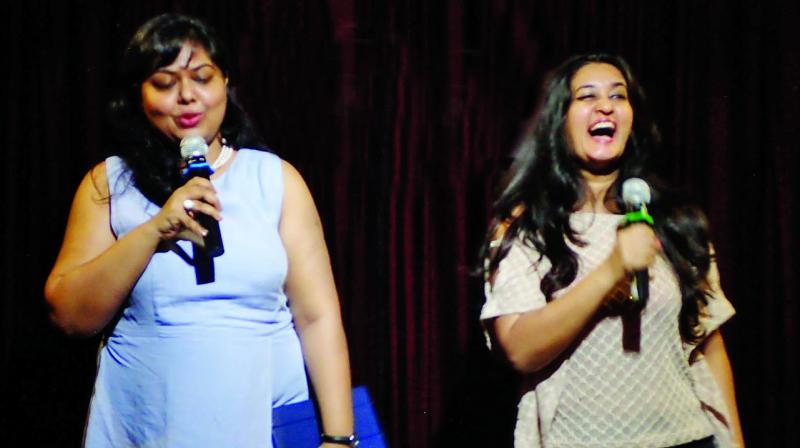 As we sit engulfed in darkness, poet Smita Sahay and stand-up comedienne Kajol Srinivasan make their way on to the dimly lit stage. What follows is a two-hour-long performance that makes us see the light, metaphorically of course, on topics ranging from feminism to mythological stories. Because, that’s what Smita and Kajol like to do: use their art forms to instigate conversations and challenge the status quo.

Sitting through a performance by 2 Brown Bards, which is what the duo call themselves, is entertaining and at the same time, eye-opening. In their performances, poetry and stand-up comedy go hand-in-hand to expose and explore themes like ageism, feminism, mental health and otherness. The duo even explores the way women have been presented in mythological stories and try to redefine, reinterpret and reclaim these stories through their performances.

“We’ve been told the same stories again and again. 2 Brown Bards are here to change these stories because they deserve a retelling,” says Kajol. When quizzed about what inspired them to fuse poetry and stand-up comedy, genres that are almost like chalk and cheese to each other, the stand-up comic says, “I have been performing stand up for a year and a half, but given the audience I usually have, I’ve found it difficult to perform the kind of comedy I want to. I’ve had to dilute, or for the want of a better word, dumb down, my comedy because comedy audiences want intant gratification; they want to hear jokes every minute. Poetry audiences are willing to wait for you to build up a scenario and then deliver a punch line. By performing with Smita for an audience that is interested in both, stand-up and poetry, I get a chance to expand my art and do something meaningful with comedy.”

Smita, who has been writing poetry for the past eight years and has even co-edited an acclaimed international anthology of poems titled Veils, Halos and Shackles, says that the desire to make poetry accessible and understood motivated her to integrate stand up comedy into her performances. “Sometimes, poetry can be perceived as being too erudite or pedantic. But that’s not the case. Poetry is a naturally communicative art form that goes back thousands of years. I felt that by pairing it with stand-up comedy, it would help liven up the performance and make poetry more acceptable,” says Smita.

The ladies like to keep the first half of the show light; in the second half, they delve into topics that are serious and controversial. At a recent show, Smita started off the evening by reciting a poem on mangoes, which was followed by Kajol doing a stand up set on drinking and bars. Gradually, and effortlessly, the duo segued into talking about the way sex is perceived in India and patriarchal shackles that bind women. “We do a jugalbandi,” explains Kajol. “Which means that comedy is interspersed with poetry, or vice versa, throughout the show. It’s like we’re passing the ball every five minutes. Every poetry piece by Smita is followed by a stand up piece by me. The format is unique and keeps the audience entertained and engrossed. We had an audience member tell us that our performance is like a salty biscuit dipped in chai,” says Kajol with a smile.

Another unique aspect about their performance is that the duo invites the audience to discuss or ask questions about the topics being explored during the performance itself.

While 2 Brown Bards have been receiving praise for their unique format and topical content, the duo feel they still have a long way to go. “We use the feedback we receive to polish our performances and work on the structure of our show. The goal is to build an audience that is willing to explore and engage with important themes through poetry and stand-up comedy,” concludes Kajol.