Bizarre: 12 monkeys die from simultaneous heart attacks in UP

Wildlife experts however disagree, say it must be due to some infection. 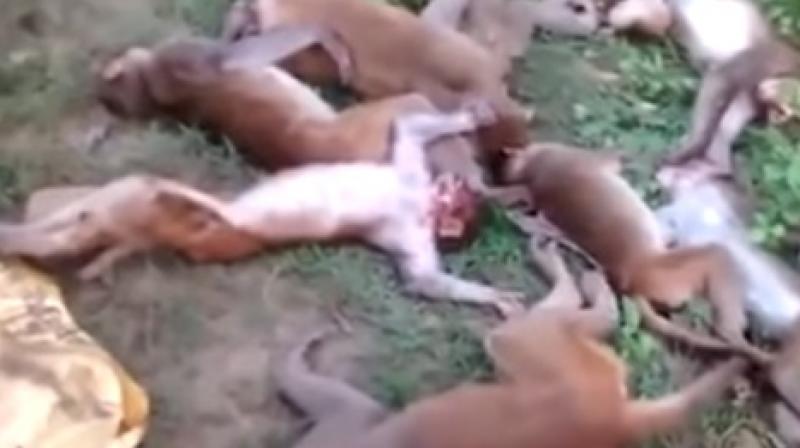 According to a vet Dr Sanjeev Kumar the monkeys could have died due to tiger’s roars as tigers often visit the area. (Photo: YouTube screengrab)

A dozen monkeys were found dead in UP, with experts claiming they suffered simultaneous heart attacks after they were scared by a tiger.

According to reports, locals found the primates in a forest clearing and were initially baffled by the mass deaths.

Postmortems were carried out, with some suspecting that the mammals must have been poisoned, but the reports revealed that they all had heart attacks at the same time.

Vets in Kotwali Mohammadi area of UP, carried out the tests and confirmed that the primates did indeed die due to cardiac arrests.

According to a vet Dr Sanjeev Kumar the monkeys could have died due to tiger’s roars as tigers often visit the area.

Forest department workers found the monkeys on Monday and an upsetting video shows them stuffing the bodies in polythene bags.

However, the claims of the deaths due to tiger roars have been criticised by wildlife experts with many saying that the deaths must have been due to infection.

Speaking to TOI, Dr Brijendra Singh, a veterinarian, said that monkeys are wild animals and they don't die in this manner. All the monkeys might have been suffering from some infection that claimed their lives.