Animal rescue centre, Grateful Paws Dog and Cat Rescue have taken the responsibility of looking for a new home for the pup. 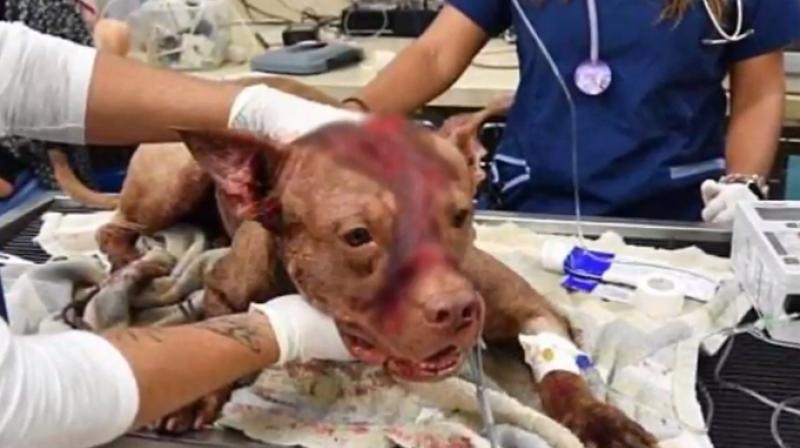 The police found the puppy after tracing his cries to a blue suitcase that was left behind an abandoned building. (Youtube/Breaking News Today)

Police in Florida want to know who stuffed a beaten and stabbed pit bull puppy in a suitcase and left him to die.

Hollywood police spokeswoman Miranda Grossman tells news outlets that officers traced the puppy's cries Tuesday to a blue suitcase that was left behind an abandoned building. Inside, they found the bloody dog with deep cuts on his head and body.

Grossman says they took the dog, now named Ollie, to an animal hospital.

She says Ollie is about a year old and will be neutered and micro-chipped as soon as medically possible.

But Ollie is a brave soul, and although he suffered such abuse the doctors said that he is in high spirits and his tag still wags with joy.

Animal rescue centre, Grateful Paws Dog and Cat Rescue have taken the responsibility of looking for a new home for Ollie.

A GoFundMe page was also set up for Ollie's medical bills and raised over $20,000 in just one day.

Meantime, police spokeswoman Miranda Grossman urges anyone with information about what happened to Ollie to contact investigators.