Day one of Mumbai’s Comic Con was quite the sight, with cosplay outfits ranging from Batman to Chacha Chaudhary, international artists and more. 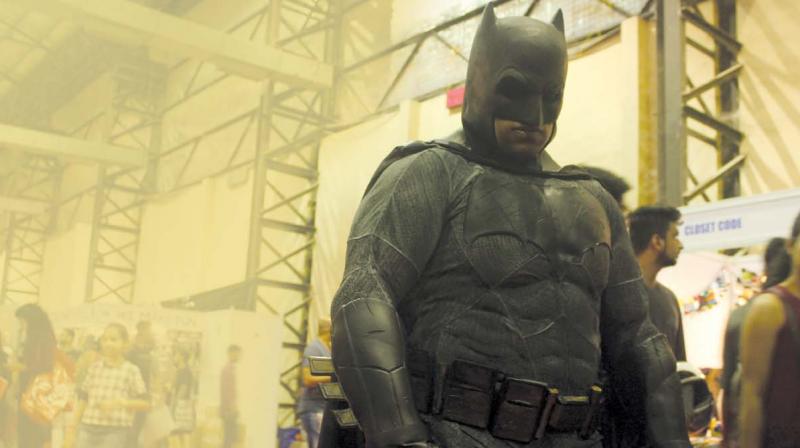 Batman stands shoulder to shoulder with the Joker for a photo-op; crowds gather at cubicles neatly stacked with posters or jumbled up artwork; comic book artists show off their merchandise.

And so commences Mumbai’s edition of Comic Con, one of the biggest events for comic book lovers. While many come to shop around for cool merchandise and artwork, or photo-ops with their favourite superheroes, there are those for whom the event means serious business.

While people swarm to shops, simply to window-shop or walk away with armfuls of merchandise, artists set up artwork they have spent months making, and build a network of new fans. Even for established artists, conventions are still essential.

“While the main attraction to comic conventions for me is to see new countries and meet the fans, it’s true that being spotted at these places is also good for you career-wise. It helps to bring in more fans and, of course, it doesn’t hurt to be seen,” grins Andrew Griffith, who has illustrated several Transformers comics among other artwork, and is currently in Mumbai for the Comic Con.

But it’s the up and coming artists who really benefit from the platform. One stall that stands out with its detailed artwork is Sayili Horambe’s cubicle. The artist, who’s happy to spend hours on her exacting art form, called stippling, says, “Each artwork is made from dots, arranged in a way to create an image. They take up at least 50 hours.”

Despite his busy schedule as an animation student, Brown Paperbag Comics artist, Sailesh Gopalan was full of energy, sketching up caricatures of visitors. “I do a comic whenever I get the time and put it up online. Hopefully I can take this up full-time when I graduate,” he smiles.

While one can find other platforms for art, for cosplayers, the event is their Mecca. Take Nicole Marie Jean for instance. Dressed in handmade black and gold armour, she looks every bit the female interpretation of Zack Snyder’s Aquaman, from the new Justice League movie. Cosplaying is not just a hobby for Nicole, it’s a passion and profession. “I’m like the grandmother of cosplayers,” laughs the artiste, who has been to several comic book conventions across the world, both as a competitor and guest.

“Since I first started, cosplay has become a household word now, comparatively. The world over, there are those who cosplay just for fun, and then there are those who spend months — and even years — for a single costume,” adds Nicole, who has cosplayed as Jared Leto’s Joker, the Comedian and Bane, since she prefers male characters to female ones.

Nicole wasn’t the only serious cosplayer at the event. Satyan Bajaj’s Penguin caught the eye, not just because he had spent nearly two months perfecting the costume, but also because he slipped into the skin of the character completely, with his villainous laughter and rough voice. Batman, as portrayed by Aditya Mehra, was another character that stood out, as was Kalpana Krishnan’s Kaecilius, with the painted-on cracks along the face and the white hair.

But in the barrage of DC and Marvel cosplayers, spotting Chacha Chaudhary was indeed a surprise. Sachin, who has been coming to every Mumbai Comic Con dressed as the character, says, “I haven’t grown up reading Batman and Superman; Chacha Chaudhary is the hero of my childhood and whenever anyone spots me, it puts a smile on their face.”