The Louvre Abu Dhabi, the first museum to bear the Louvre name outside France. 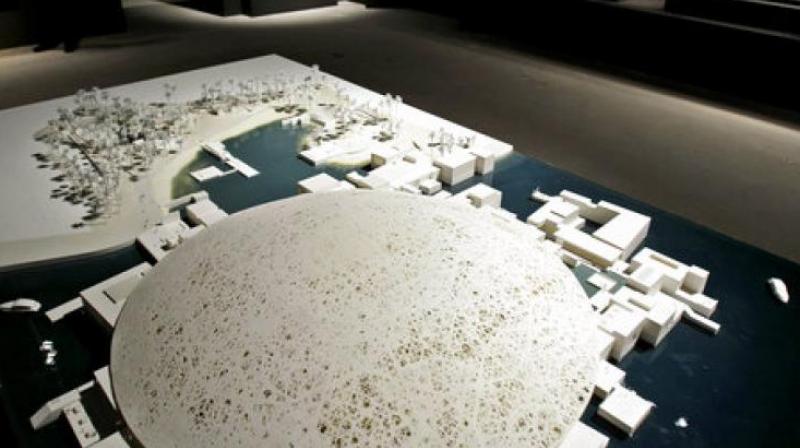 In this Tuesday, April 16, 2013 file photo, a model of the future Abu Dhabi branch of the Louvre museum by French architect Jean Nouvel is on display as part of a sample collection at the museum in Abu Dhabi, United Arab Emirates. (Photo: AP)

ABU DHABI: The Louvre Abu Dhabi opened its doors to the public on Saturday, drawing thousands of visitors as cosmopolitan as the United Arab Emirates itself, a symbol of the Gulf nation's ambitions on the global stage.

Light streamed down from the vast domed ceiling, the open-air museum reminiscent of a traditional Arabic marketplace. Inside, Emirati teenagers in flowing black robes snapped selfies next to a towering oil painting of Napoleon Bonaparte. Hundreds of Asian, European and Arab expatriates dressed in stylish attire roamed through the vast museum alongside Emirati couples in traditional Arabic dress.

"I'm so excited to see what's in the Louvre. I don't know how to pronounce it," giggled Rachel Aquino, a Filipina nurse living in Abu Dhabi. "LOOV," her friend Ruby Fullon, a fellow nurse from the Philippines, pronounced.

Down the palatial rear steps of the open-air structure, Alex Viera and Marcelo de Paula from Brazil snapped photos on a platform jutting out over the sea, with traditional dhow wooden ships moored in the background.  "I've been to the Louvre in Paris three times... I think it's very nice to see it here in a modern context," said Viera.

The Louvre Abu Dhabi, the first museum to bear the Louvre name outside France, presents around 600 pieces and has been billed  as "the first universal museum in the Arab world".  Under the 30-year agreement, France provides expertise, loans works of art and organises temporary exhibitions -- in return for one billion euros ($1.16 billion).

The Louvre in France takes a 400-million-euro share of that sum for the use of its name up to 2037. For the next 10 years, the mother ship in Paris will lend works to its Abu Dhabi partner on a voluntary basis, for a maximum of two years.

For its permanent collection, the museum has acquired hundreds of pieces, dating from the earliest Mesopotamian civilisations to the present day. On opening day, guided tours wound through the spacious galleries as Asian and African dance troupes performed in the open-air sections overlooking the sea. "It is not a copy of the Louvre," said Badria al-Mazimi, an architectural engineer. The 26-year-old Emirati said she had visited the site when the museum was still under construction and had eagerly anticipated the public opening.

"The beautiful thing is they made it not just one building, but like a little neighbourhood. When you walk around, you feel like you're walking in an old Emirati quarter," she said, beaming as her husband studied a Central Asian statuette dating from 1700 BC. "To see all these people from different nationalities waiting in this long line to visit the Louvre - it's something really special," she said.  "This is what you see when you travel abroad, and now it's here, in the Emirates."

More than a decade in the making, a VIP inauguration was held on Wednesday, with French President Emmanuel Macron among the first visitors. The museum design, by France's Pritzker prize-winning architect Jean Nouvel, conjures up the image of an Arab medina as seen through the eyes of a contemporary cinematographer.

A silver-toned dome with perforated arabesque patterns appears to float over the white galleries, creating what Nouvel describes as a "rain of light". To reach the ground, each ray of light must cross eight layers of perforations, creating a constantly shifting pattern that mimics the shadows cast by palm trees or the roof of a traditional Arab market. The Louvre Abu Dhabi is the first of three museums to open on Saadiyat Island, where the UAE plans to launch the Guggenheim Abu Dhabi, designed by Frank Gehry, and Norman Foster's Zayed National Museum.