The marvel that is Mahalaxmi Mandir

The goddess Mahalaxmi has a small but critical part to play in the birth of Mumbai, so it’s only fair that she gets the best view of the bay. 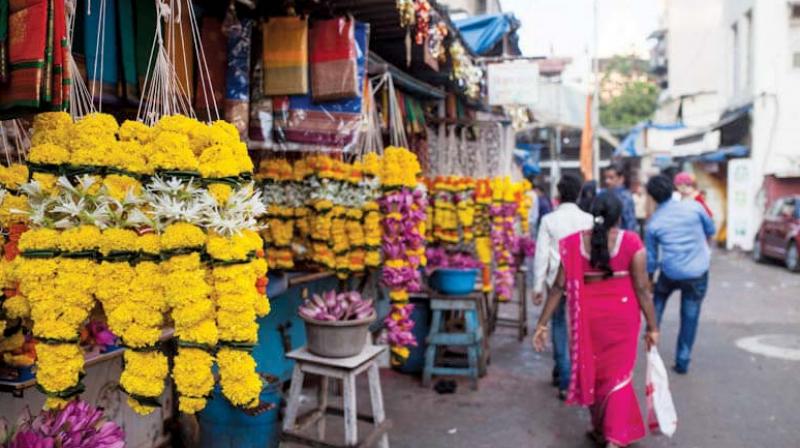 Garlands of marigold, rajnigandha, and mango leaves hang in what seems like one, long, unbroken chain. (Photo: Suruchi Maira)

Mumbai is the chosen city, not just of migrants and dreamers, but also of the Goddess Mahalaxmi. She wanted a home in Mumbai at a time when the city was just seven islets kept apart by the angry Arabian Sea; when the city was still Bombay. She decided to invade the dreams of a sleepless engineer tasked with building the embankment at Worli. The waves were washing away his men’s valiant attempts at blocking off the Great Breach (Breach Candy) between Dongri, Malabar Hill, and Worli, and his morale had hit rock bottom. That’s precisely where he found her, at the bottom of the sea. The stone idol was fished out and housed in a temple, the sea-wall was made, and more reclamation followed. Bombay was built, and Mahalaxmi got her home by the sea.

More than 230 years later, the temple perches precariously atop a cliff, the dome peeking out from a jumble of hutments, the orange flag flapping in the sea breeze. When the scalding mid-day sun scorches up the muddy waters of the Arabian Sea, the temple transforms into a silhouette, standing tall and silent behind the Haji Ali Dargah. The Temple By The Sea and The Dargah In The Sea. This tranquil scenario, this picture perfect postcard, this symbolic frame is the calm before the storm.

Every day is like a mela at Mahalaxmi Temple. Stalls selling puja items line up the lane leading up to the entrance. Garlands of marigold, rajnigandha, and mango leaves hang in what seems like one, long, unbroken chain; stacks of tough, brown coconuts occupy the front; red and gold chunaris in a dozen different designs lie neatly folded at the back. Women in cotton sarees sit on top of wooden counters, sprinkling water at regular intervals to keep the lotus stalks fresh and dewy.

Pyramidsof sindoor, kumkum, and turmeric in tiny, round, plastic containers glow in the sunlight. Devotees dither at the sweet shop. “White, yellow, or brown?” I always go for the gentle cubes of brown peda rolled in powdered sugar. That’s what the goddess likes best. And my brother.

As children, we had to be bribed with a trip to the nearby Crossword to make the arduous trek up 200 steps to the temple. As adults, we realised the 200 steps were actually just 20. Streams of sweat would cool our little bodies as we stood under the lone fan inside the marbled hall at the top. This atrium is now a wooden snake. Men, women and children trample all over the elevated planks, digging their elbows sideways into strange stomachs, holding their thaalis high above their heads, sidling up to their relatives at the front of the serpentine queue, shuffling ahead on tiptoe to catch a golden glimpse of the goddesses.

Mahalaxmi, Mahakali, and Mahasaraswati gaze nonchalantly at the swelling swarms. Priests work like clockwork, helpers skin coconuts, cleaners swab the floor. Together they chant, “Aage chalo, aage chalo”, the litany floating up and overeager outstretched hands and heads, right till the very end of the haphazard queue. One quick bow, eye contact with the priest tearing open the peda packets, and you’re out of the inner sanctum.

The customary circumambulation reveals a bevvy of believers pressing coins against the shiny wall, waiting with bated breath for a second, and then watching the money clink between the polished, steel bars into the donation box. A father tries to show his young son how it’s done. A girl in a pink, frilly dress seems non-pulsed, picking out coin after coin from the abyss of her fist. A single coin clings to the wall. It could be faith or just superglue.

A poster prohibits photography (“selfie and normal”). A uniformed guard ignores the gaggle trying to be as discreet as an outstretched arm holding a phone can allow. The hordes flow down the steps at the back, rushing to meet the sea. There are a bhajiyawala and a cold drink stall just before the Dariya Hanuman Mandir at the bottom, a welcome diversion on a hot, summer day.

Fuelled and fed, families tumble into the open area right by the water. Children play hopscotch on the burning floor, eager adolescents press their faces against the wired fence to squint at Haji Ali, and parents find a shaded bench to catch some shuteye. But the horizon beckons, eyes gaze towards the open sea, and the mind marvels at the view from Mahalaxmi’s digs. She’s got the best seat in the house.