The international music sensation talks about her plans in Mumbai and gives a sneak peek into her upcoming show. 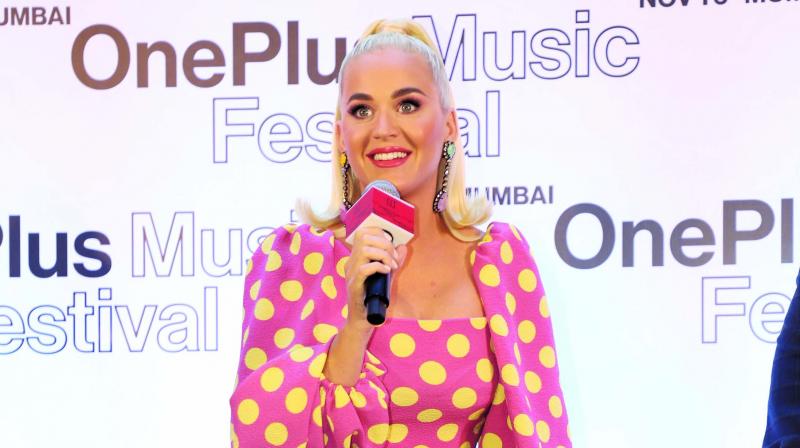 Dressed in a pink bodycon dress with yellow polka dots and balloon sleeves paired with fuzzy heels, Katy Perry made her first pre-show appearance in the city in her iconic style. The Hot N Cold singer, who is all set to perform at the One Plus Festival in the city for the first time is bringing a huge production with her. The pop-star opened up about her love for music, her Mumbai itinerary, and future plans at a recent press interaction.

No stranger to India, Katy has earlier performed at the opening ceremony of IPL back in 2012. But this time around, the Roar singer wants to take some time to soak in the experience. “It’s been a long time since I have been here and when I was here for the IPL, I was kind of in and out and this time is all about immersing and educating myself,” says Katy. She acknowledges that most singers skip over India when it comes to deciding tour stops, but Katy is excited to mesmerise the audience with her over-the-top production. “It is sometimes difficult to bring a big production over here and that’s why most people don’t add places on their tour because they have to change everything. But I really wanted to come back to India,” she says.

The music festival will also see artists such as Dua Lipa and homegrown talents including Amit Trivedi, The Local Train, among others, and Katy is excited to share the stage with them. “I’m excited to watch some of the other people who are going to be on stage. I’m not familiar with some of the bands as I should be. And I’m totally excited to immerse myself in the culture this week in Mumbai,” says the singer, who is also looking forward to roaming around the city and indulging in some delicious food. She adds, “I don’t want to stay in my room, I’m not that girl who just orders room service and chills. I like to go out, seek the world. I love the people, the culture, the traditions — I love all of it. You’re gonna catch me in the street.”

And to take her around the city, there is Bollywood diva Jacqueline Fernandez. The Race 3 actress, who couldn’t stop fangirling over Katy, has picked up an outfit for the singer. “I have been following your work for the longest time and you’ve been a major source of inspiration when it comes to costumes and get up looks. When I’m going for something, or about to start a project, I research your stuff. So I picked up something kind of cool for her and hope she’ll be wearing it soon,” says Jacqueline. The singer would also be meeting some B-town stars and is excited to attend some fun party.

When questioned about the idea behind the music festival, Tilen Pilag, Head of Community, One Plus points out that music is a way of bringing people together. He says, “In every community, there’s a shared interest and humans connect at a certain level to share interests and values. And you always look at what is one thing that you can pay forward and get back and I think that music was one of those things.”

Katy agrees with the statement and says, “Music is the universal language. Wherever you go, no matter what language you speak, you can all unite over singing the same song and it is the same feeling. In an age where we feel so disconnected, when we come together as a community for a music concert, that’s where I feel the magic again. And so, I think music is that secret language that connects us all.”

Although Katy’s career started in the early 2000s, she only rose to fame in around 2008 with her album One of the Boys, singing songs like Hot n Cold, Thinking of you, among others. Ten years and four albums later, Katy realises that it’s time to strike a work-life balance. “After doing 11-12 years of this kind of back-to-back four tours and four records, I definitely have to strike a work-life balance,” she says, adding that she needs new dreams now that she has out dreamt her old ones.

Imagining the next phase of her life, Katy craves for more family time, she says, “I want to have moments with my family, I want to go and see the world, take trips. When I’m in Mumbai, I want to eat, see and taste all of it. It’s not about slowing down, it’s about being more present where I am, and really soak it in. Because it has been such an incredible whirlwind since 2008,” she laughs.

Karan Johar is famous for his parties, which usually cause the Internet to blow up. The star-studded parties have some of the most prominent, popular and sought out people of the industry. And the latest bash promises to be grander than his last.

The latest party will be a warm welcome for singer-songwriter Katy Perry, who is in town to perform at the One Plus Music Festival on November 16 alongside Dua Lipa, Amit Trivedi, and Ritviz. It has been revealed that the party will take place at Karan’s residence just before her concert, so she can get to know Bollywood’s bigwigs a little better. Ranveer Singh, Varun Dhawan, Alia Bhatt, Deepika Padukone, Malaika Arora and many others are expected to attend.

This isn’t the first time that Bollywood has hosted parties for international superstars. One may recall that Shah Rukh Khan had hosted an after-party for Coldplay, and Abhishek Bachchan hosted one for Ed Sheeran. Meanwhile, this is Katy’s first concert in Mumbai, and she’s obviously pumped. “I am looking forward to seeing and signing with all of my Indian KatyCats,” she says.