With AAP winning majority seats in Delhi’s 2020 assembly elections, we speak with city dwellers to gain an insight. 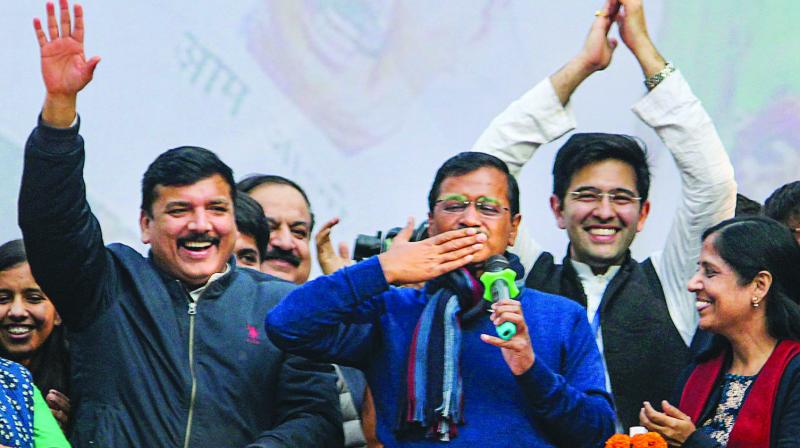 2020 started with a kick-off year for Dilliwalas when they witnessed a historic win of the Aam Aadmi Party (AAP) in the Delhi assembly elections. AAP being a young party was born in November 2012 and has become the latest regional party at the state- level and for many youngsters out there.

This year’s state assembly election was held on 8th of February, AAP wins for the third time by grabbing 62 out of 70 seats, while BJP win the other eight. We speak to city-dwellers to gain insight as to whether they are happy about the result or not and what they feel about it.

“This was perhaps a rare time in Indian politics where people voted on the basis of governance-related work and not on caste/religion lines,” says Saurav Das an RTI activist. Das also adds, “AAP’s win is a defeat for hate-politics. Delhi’s election was marred with hate speech, also not to forget the blatant attempts to polarise between Hindus and Muslims. However, the voters ensured that all these diversionary tactics didn’t overshadow the good work done by AAP which includes healthcare and education as well.”

“You get this great power of voting at the age of 18, it should be used wisely, one should vote for someone you can trust on and it is important to have a background check before voting for ‘that’ someone,” says Deepika Sharma. Sharma continues, “I have seen people voting blindly without knowing about the person they are going for and instead, they cast vote for the party, so in my opinion that is something wrong people do often. This time, Delhi sees a big change, (including me) people around me voted for the candidate and not the party and honestly, the youth has changed and they know what is right and wrong and they don’t vote just for the sake of it, hence the result speaks for itself.”

Where as Palak Singh thinks that whoever comes in power should just do well for the city and says, “For me which party is in the power doesn’t matters, the main thing is that the government should do the welfare of the city and provide employment which is very less in today’s time.”

Where as Jatin Arora, a 31-years-old Delllite says, “Arvind Kejriwal has proven that last minute the politicization of issues cannot compete with a term full of efforts and visible progress in Delhi. Marketing will only work if you have a credible idea to sell, I'm a proud voter of AAP since the last 2 terms!”

Arvind Kejriwal will take oath as Delhi Chief Minister on February 16 at Ramlila Maidan in a grand ceremony that will be open to the public.