The man behind an iconic photo

Nick Ut, the man who captured the ‘Napalm Girl’, talks about what kept him going over the years. 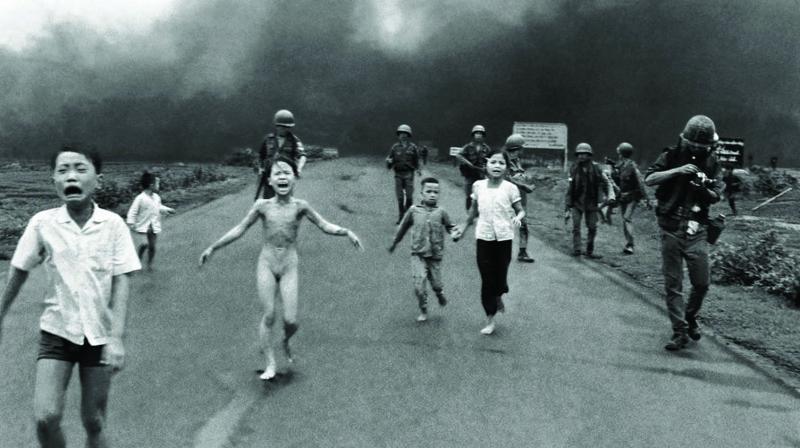 But Nick lived on, leaving Vietnam once Saigon fell and the war was over. He was in Japan for a couple of years before AP called him to LA.

You can imagine why he would not be too fond of the noise or loud voices around him. That’s all his life had been for a long time, even before the photo he took that would make him world famous. Nick Ut, born Huynh Công Út, was born four years before the Vietnam War began. He grew up hearing the noise of bombs exploding and people screaming. At 15, he took the cameras — Leica, Rolleiflex, and Nikon — and left behind by his photographer brother who died in the war. Six years later, on June 8, 1972, he took a picture that the world would call ‘Napalm Girl’, of a group of children including a nine-year-old naked girl running from an explosion, screaming towards Nick’s camera, somewhere in Trang Bang, South Vietnam. Decades have passed and the Pulitzer-winning photographer is an icon, a celebrity everyone wants a selfie with. There are scores of young photographers waiting to meet him in India where he has come to attend the International Press Photo Festival in Kerala.

At the Mascot Hotel in Thiruvananthapuram d outside the Tagore Hall where he sits, answering many interviews and photo requests, Nick talks quietly, there is noise everywhere.

But he never complains, never says no to the many requests coming his way. He knows his fame, he knows what his photo made him. It brought him a Pulitzer, it brought him admirers from across the world. But most importantly and Nick would remind you this, it changed the war.

“President Nixon saw the picture. Everyone knows the picture. That’s what stopped the war — the girl in the picture,” Nick says. He visited the girl — Phan Thi Kim Phuc Oont  —  later at her house and hurt his leg as a grenade exploded.

“She was playing outside her house that day the napalm was dropped. She and a couple of children were jumping around. Kim looked up and saw the bomb. She said, ‘run run run’, but it was too late. Her clothes were burned and so was her body,”  he recalls. There was a lot of doubt at the time if the picture of a naked girl could be used in the paper. Nick had by then been working for AP for a while, getting his brother’s job after calling the boss many times. They didn’t want to hire him initially since his brother had died working for them. But Nick was persistent. He would study at the darkroom of AP, Saigon. Other photographers — the famous Eddie Adams included — were there and Nick learnt the work. His boss asked him one day to shoot pictures of Buddhist monks burning themselves and Nick got his photograph on the front page. He became a war photographer when in 1968, he took pictures of the Viet Cong attacking the American Embassy in Saigon.

The day of the napalm attack, Nick had enough pictures of the war. When Kim unexpectedly ran towards his camera, Nick thought she was going to die. He poured water on her, covered her and took her to the hospital along with the other children. At the hospital, when they were hesitant to let the children in, Nick flashed his media card. “I warned the doctor and nurse. I told them if they didn’t help her, the picture of the nude girl will be everywhere in the world.” They took her in. She was saved. He had said in a previous interview that if he had not helped her and she died, he would have killed himself too.

But Nick lived on, leaving Vietnam once Saigon fell and the war was over. He was in Japan for a couple of years before AP called him to LA. He spent the remaining of his five decades as a photographer in LA. He nearly got ‘Iraq war’ too. But his friends told him that he has had enough in his life. He is married and has children. It was not 1972. “Back then I was single. It was fine if I died — everyone dies once,” he says.

In LA, Nick took photographs of Hollywood stars. He was not thrilled at first but after a while, began enjoying it. “I liked it, meeting many big movie stars. They know who I am. ‘Nick Ut your picture changed the war’, they tell me.” Through all these years, he kept in touch with Kim. “The first time her dad showed her the newspaper cutting, she asked why she was naked while all the others have clothes. But later she thanked me. That photo changed all our lives.” Even now he calls her once every week, or else month. The press photographers in Kerala have asked him if he could come again next year and bring Kim along. “I have asked her; she is now taking care of her ailing mother.”

Nick is enjoying his time in Kerala, he will be travelling across the state, clicking. But he is too busy with interviews, he says. As camera clicks fire away, Nick smiles, poses, and declares “Woah, machine gun.” And winks.