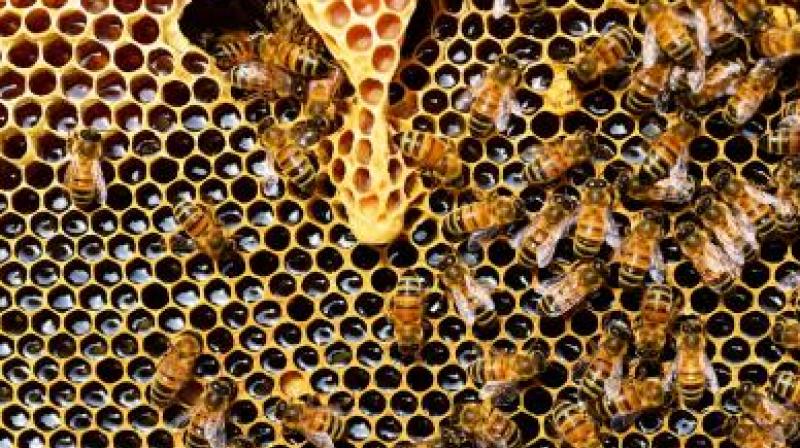 Even if bees are affected at sub-lethal levels, their fall in health eventually contributes to the collapse of their colonies. (Representational Image/ Pexels)

HYDERABAD: India could be in the middle of a silent but unfolding disaster in its farmlands and fruit gardens because of a steady decline in honey bee population across the country, which could lead to a severe setback to the country’s food production.

Agriculture scientists, entomologists, apiculture experts and pesticide industry managers, have called for urgent studies to understand the real situation on honey bee health and populations across the country.

Almost 80 per cent of all crops and most fruit-bearing trees require pollination.
Studies have shown that honey bees are responsible for up to 75 per cent of all pollination that keeps the crop production engine grinding in India, like elsewhere in the world. “Right now, it is a tragedy.

Something needs to be done before it turns into a catastrophe,” said P. Ravindra Kumar, director of apiculture technology centre at Prof Jayashankar Telangana State Agriculture University in Hyderabad, on the status of honey bees in the country. While there are no nation-wide concerted studies to understand the bee population distribution, anecdotal evidence shows that the numbers of beehives are falling.

“When I started the apiculture programme at NIRD (now the National Institute of Rural Development and Panchayati Raj) in 2004, I used to see several beehives. Today, I hardly see any,” Kumar told Deccan Chronicle.

This is the situation in an area of the city that is full of trees, flowering plants, and is the hub of agriculture training and teaching in the state. One of the biggest drivers of the fall in honey bee population, as also other pollinating insects, is the indiscriminate use of pesticides in the country, with factors like heat-induced stress from rising temperatures because of climate change and radiation from cell phone towers, particularly in urban areas, contributing to their decline.

According to Prof Parthib Basu, who leads the centre for agroecology & pollination studies at the University of Calcutta, “honey bees, the flagship pollinator species, are under tremendous physiological stress in agro-eco systems.”

Pesticides and other agrochemicals such as herbicides and weedicides are killing bees and other pollinators, especially in intensively farmed areas.

Also of great concern is the impact of manifestations of sub-lethal pesticide doses the bees and other pollinating insects are exposed to. “In such cases, the bees don’t die immediately but will drop off. There are behavioural aberrations, they lose their ability to smell, can no longer see properly, which affects their orientation for foraging and returning to their hives,” he said. In addition to bees, Prof Basu said that there are hundreds of other non-flagship pollinators.

“They are also under tremendous stress. Perhaps we are losing this diversity without anyone noticing it,” he said. “Our research,” he said “has shown that pollinators get killed along with pests. This essentially brings down productivity because you are letting go of pollinators.”

Declaring that there is no such thing as a safe pesticide, Prof Basu said when neonicotinoid pesticides were introduced, they entered India in a big way about a decade ago. They were initially thought to be safe for friendly pollinator insects but now it is known that they are equally harmful. “There are published reports that have shown that even the so-called bio-pesticides also have tremendous adverse effects on bees, at least at the sub-lethal levels,” he said.

Even if bees are affected at sub-lethal levels, their fall in health eventually contributes to the collapse of their colonies.