Renuka Vishwanathan is a former IAS officer who now works with AAP. 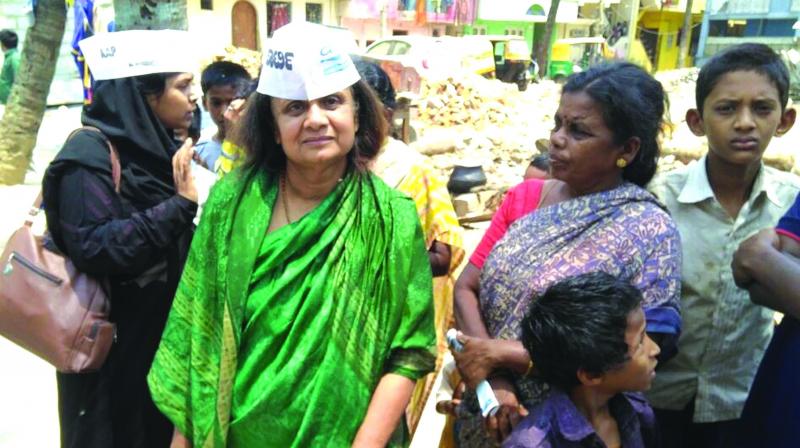 Acknowledging the need for new-age netas to be ‘socially’ relevant, she begins, “I wasn't too active in the beginning.

Affable yet suited to any role that she dons, retired IAS officer and AAP candidate Renuka Vishwanathan doesn't believe in mincing words. The first woman collector in Karnataka and a former member of the Planning Commission is all for speaking up, getting those words to transpire into reality and toeing the fine line between being socially active yet relevant, while she's at it. But before the conversation ensued, Renuka made what she loves about her job clear  – the 'volunteer' part.

Her Facebook page’s bio, reads, ‘A grassroots volunteer’, speaking of which she says, “I don't believe in the stature business. It's all very vertical. I've been wanting to write a piece on the difference between verticality and the originality of volunteer service, which I'm experiencing for the past four or five years. I am a volunteer. When I ventured out with the party, nobody knew what my previous profession was. I never really bothered. I prefer working on first name terms with everybody. Volunteers will work. But, you can't direct, manage or control anyone. People do what you want when they know and believe in what you're doing. Every day you make wonderful discoveries. If people like what you do, they will listen. Or else, they will leave.”

Acknowledging the need for new-age netas to be ‘socially’ relevant, she begins, “I wasn't too active in the beginning. People of my generation are used to privacy of a certain level. But I have come to terms with the fact that it is very useful as it forces you to be picky. It helps you come to the point. I haven't been trolled badly. But I'm aware that can happen as mindless trolling is a sad reality.”

Quashing how there were scores of memorable experiences during her tenure as an IAS officer over ‘notable feats’; Renuka elucidates how working in the finance ministry was the most wonderful learning experience. “Working at the key desk, which is all about dealing with the balance of payments. Right through the liberalisation, I've always enjoyed learning and sitting at the heart of the entire economic spectrum. That was extremely fulfilling as a job.” And the biggest takeaway from her career has been learning to not take everything to heart. “Working on preparing schemes, which can benefit the poor and the downtrodden in a big way can be fulfilling on a personal level. But being a part of the Planning Commission was a great opportunity. I remember getting involved too much in a scheme that got wind-drafted. Some things work and some things don’t work. You need to learn to move on.”

At present, she’s trying really hard to strengthen the AAP Party mechanism. However, she's honestly happy to be free from responsibilities. “I'm pretty much free to do what I want to do, as long as I'm healthy enough to do it. I love being available to people who wish to discuss interesting plans. I also love reading. I am a movie buff. I love good, well-made cinema. Since I'm an early morning person, I'm pretty exhausted by night. I drive around the night. People often try to discourage me, but I couldn't care less as I'm very comfortable behind the wheels of the car and people's opinion about me or my age shouldn't or won't ever come as an impediment to what I want to do, professionally or personally.”