Philanthropist Neerja Birla and her daughter stand up for suicide prevention through Mpower. 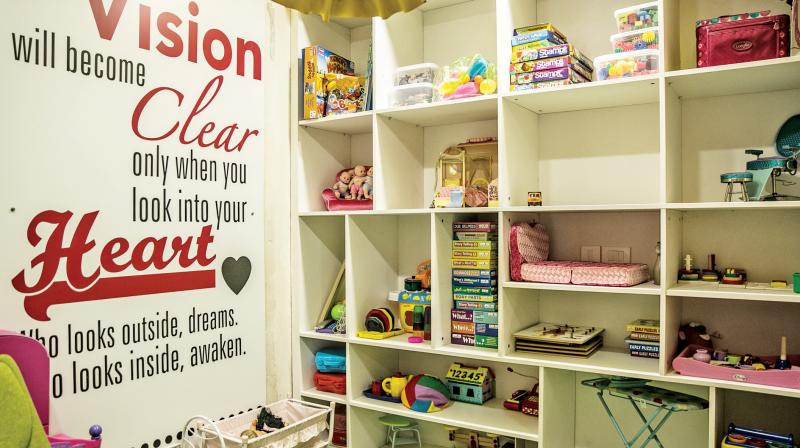 The Mpower flagship centre in Mumbai.

Three days ago, on World Suicide Prevention Day, the #EarForYou campaign kicked-off with an intriguing video that depicts a brother trying to reach out to his elder sister, sharing his turmoil through a letter. The video urges for people to listen for the signs from friends and family and to pledge to be available for those seeking help. A powerful initiative by Mpower, the brainchild of philanthropist Neerja Birla and her 23-year-old daughter Ananya, the movement caters to championing mental health causes and creating awareness to prevent suicides.

For three years, the idea has been floating on Neerja’s mind but things fell in place in November 2015 over a casual mother-daughter chat. “One night, Ananya and I were discussing the dearth of mental health facilities in India. As an educationist, who has been involved in the running of two schools, I have seen, first-hand, students in my schools facing myriad mental problems. Further compounded by the fact that the parents of the children, most of them very well educated, are often in denial about them. Even those who are willing to seek help, don’t know where to go. Mental health help is not so easily available in India. This led to exploring the attempt to bridge the gap?” says Neerja, founder and chairperson, Mpower.

One thing led to another and talks with consultant pediatrician  Dr. Mahesh Balsekar and renowned child and adult psychiatrist and psychotherapist Dr Zirak Marker finalised things. Within three months, the framework and plan for Mpower was ready. The flagship centre opened in May 2016 and by December, the foundation was officially launched. The Mpower Centre offers consultation to families and other practitioners by providing an outreach that helps in identifying severe or complex needs that require more specialist interventions, assessment, treatment and training. It comprises of primary mental health workers, psychologists and counselors working in GP practices, paediatric clinics, schools and youth services.

Why mental health?
“Life in its most intricate form is alive all around us. Everything you see and experience has an impact on you. People are so conscious and careful about physical health but mental health issues are simply swept under the carpet. There’s too much stigma attached to it. We are living in an era of emancipation and enlightenment. Every dogma that has dogged society for generations is now being questioned. In such a scenario, it is sad to think that the stigma attached to mental health disorders is the reason behind the suffering of so many people. Mpower is about reaching out to those people and telling them that — it’s okay to not be okay. But it’s not okay to not seek help,” says Neerja.

The philanthropist believes in giving everything to what she’s committed to. “That’s what I’ve tried to instil in my children as well. I’m extremely lucky to have a qualified and dedicated team at Mpower and we’ve worked hard on deciding what the foundation is all about, how it will function and what its goals are. The mission statement of the foundation is bigger than me. I am aware of my responsibilities and try to be as sensitive to the topic and to people as I can,” says Neerja who wants to reach out to smaller cities and towns as well through the digital campaigns. “They need even more help than the metros. There are only 0.3 psychiatrists per one lakh people in India. That’s a shockingly low number. And the smaller towns offer little or no mental health counselling,” she adds.

Gen next
Neerja’s daughter Ananya is a true blue gen next girl who pushed her into taking the first step towards the cause. “Like any youth, she is extremely aware of what is going on in society and has a mind of her own. She is against prejudices and is willing to take a stand for causes that she believes in. She has this righteous impatience in her that makes her want to ‘do’ things, not just think about them. She was the one who told me - it’s now or never,” says Neerja.