Ganesh Chaturthi 2018: Here are 32 types of Ganeshas, which one did you bring home?

Ganesh idol is also classified based on the direction His tongue points, or His posture. 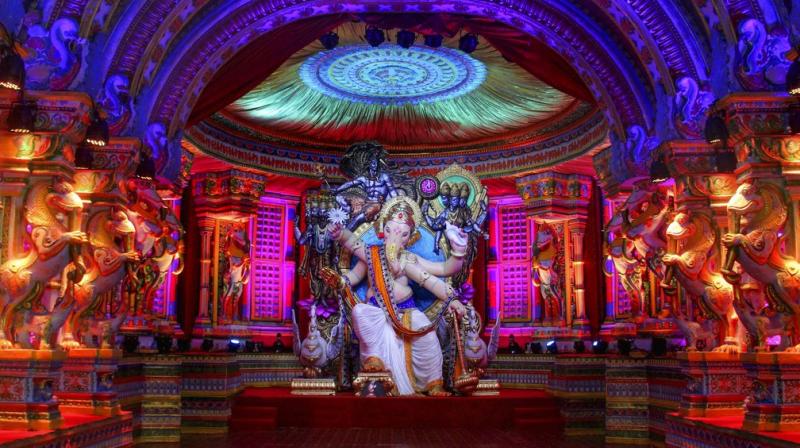 Based on His form, Ganesh idols are of 32 types. (Photo: PTI)

Thirty-two forms of Ganesha are mentioned frequently in devotional literature related to the Hindu god Ganesha (Ganapati). The Ganesha-centric scripture Mudgala Purana is the first to list them.

Interestingly, Lord Ganesha idols can be classified depending on his posture, characteristics, and even the position of his trunk.

Normally, Ganesha idols can be sitting, standing, dancing or reclining. While sitting and standing ones are mostly worshipped, the other two are usually kept at home purely for aesthetic purposes.

Ganesh idol is also classified based on the direction his tongue points. It is believed that the ones which have their proboscis facing the left are known for bliss and tranquility and are thus worshipped at home. Those who have their trunk to the right are known as Dakshinabhimukhi idols are are not usually kept at home as they are said to be active and need a separate set of rules of worship. Ganesha idols with a straight trunk or trunk up in the air are hard to find, but are considered special. The idol with the trunk of Lord Ganesha in the air represents a state where his ‘Kundalini’ reached the peak. These idols are always good for any home and office.

Based on His form, Ganesh idols are of 32 types. Here are the various forms of Ganesha: 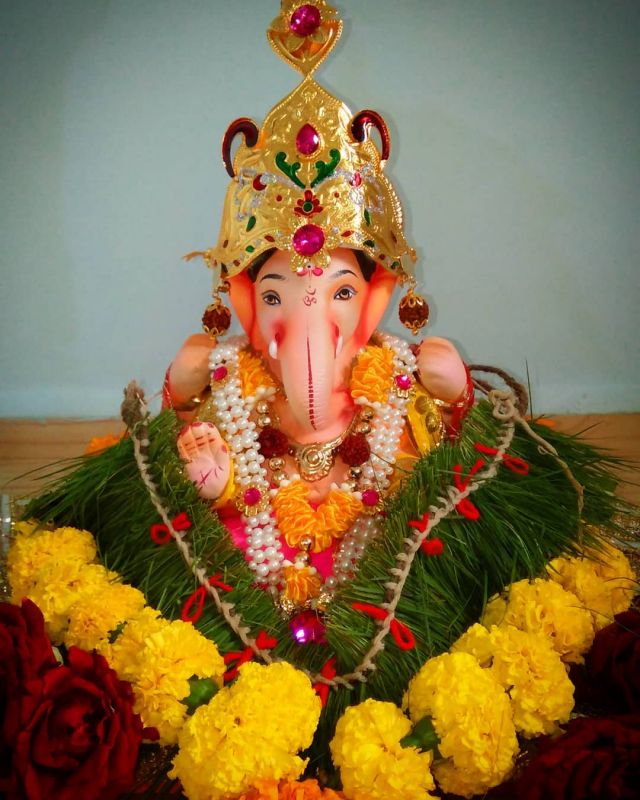 Lord Ganesha is worshipped in many forms. (Photo: Soumyabrata Gupta)

Bala Ganesha: He is childlike. Bala Ganesh has four arms and he is holding banana, mango, sugarcane and jackfruit in each hands. And he is holding his favorite ‘Modaka’ in his trunk. Each of the items in his hands represents abundance and fertility.

Bhakti Ganesha: He looks all pleasant and shining like a full moon and is fully decorated with flowers from head to toe. He is holding a banana, mango, coconut and bowl of sweet in each of his four hands. Bhakti Ganesh is dear to his devotees and is always showering blessings on the devotees.

Vira Ganesha: The warrior, he is seen in his standing posture and with the 16 arms. In each hand, he holds weapons, symbolizing powers of mind. 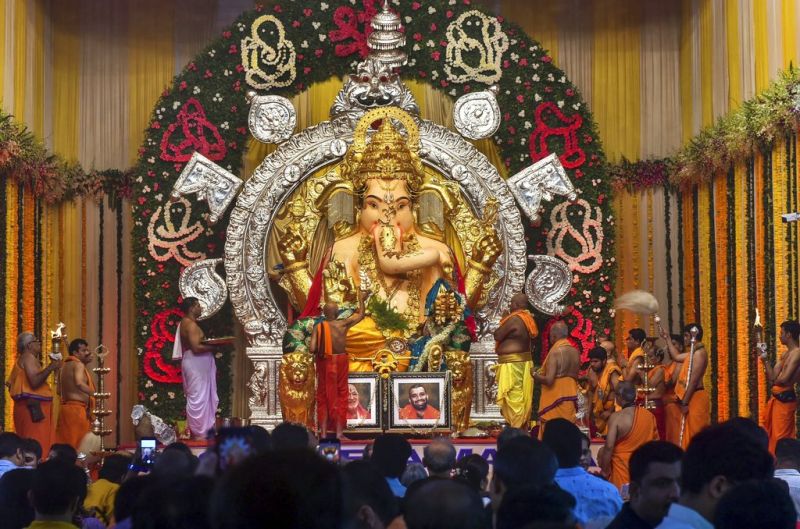 Devotees at the GSB Seva Mandal Ganesh Pandal on the first day of the Ganesh festival in Mumbai. (Photo: PTI)

Shakthi Ganesha: The guardian and a protector, He has four hands. With one hand, he is blessing all the devotees and in the other three hands, he holds garland, noose and goad. Shakthi Ganesha has one of his ‘Shakthis’ or wives, sitting on his knee.

Dvija Ganesha: Regarded as twice born and equivalent to Lord Brahma, He is worshiped for knowledge and wealth. This four-headed Ganesha has four hands, in which he holds a ‘Kamandalu’, Rudrakha, a staff and a leaf scripture.

Siddhi Ganesha: An epitome of intellect and success, He sits in relaxed pose, holding flowers, axe, mango and sugar cane in his four hands. With his trunk, he is holding his favorite Modaka sweet.

Ucchista Ganesha: He is known as the Lord of blessed offerings. One of his shakthis is sitting on his left thigh. He has six arms, each arm holding something unique. He is holding a veena, pomegranate, paddy, lotus and rudrakha in each hand. 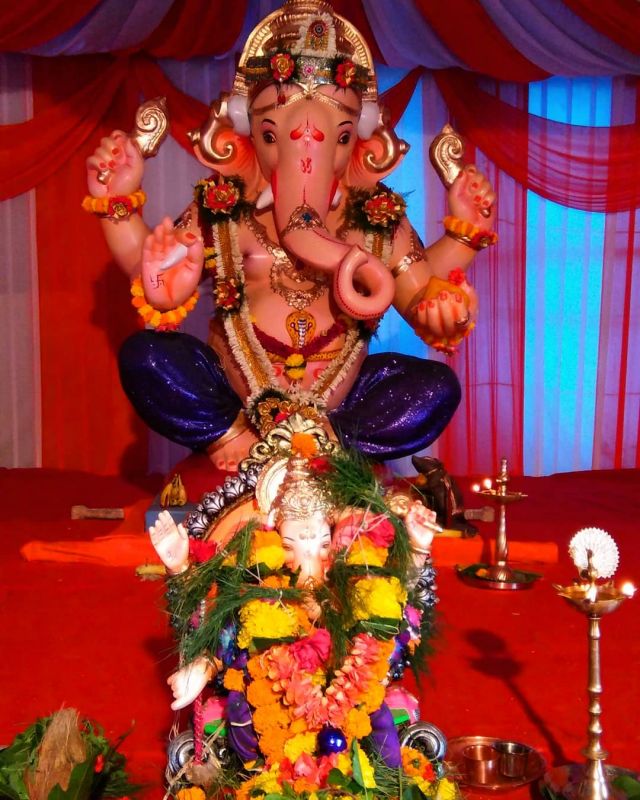 Vighna Ganesha: He is the Lord of removing obstacles. In this form, he appears similar to Lord Vishnu. He has a Shankhu and Chakra in two of his eight hands. In his other hands, holds a noose, goad, tusk, modaka, a bouquet of flowers, sugar cane, flower arrow and an axe.

Kshipra Ganesha: Easy to please, He is known to bless the devotees with what they need quickly. In his four hands, Kshipra Ganesha is holding noose, goad, broken tusk and spring of Kalpakavriksha.

Heramba Ganesha: The five-headed Heramba Ganesha is the protector of the weak. This is a very rare form of Ganesha and is seen riding on a lion. He has ten hands. He holds axe, hammer, noose, beads, broken tusk, garland, fruit and modaka in His hands.

Lakshmi Ganesha: Lakshmi Ganesha sits with both his wives, Siddhi and Buddhi, on his either thighs. Lakshmi Ganesha stands for achievement and wisdom. He has eight hands and holds parrot, pomegranate, sword, kamandalu, spring of Kalpakavriksha, noose and goad in his hands. 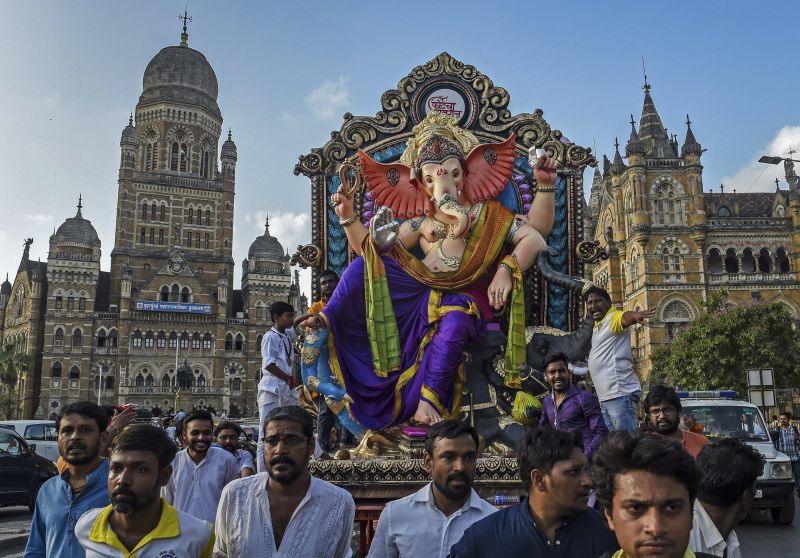 A Ganesh idol being taken to the marquee in Mumbai. (Photo: PTI)

Maha Ganesha: Maha Ganesha is the most commonly worshiped form of Lord Ganesha. He has ten hands and is holding broken tusk, pomegranate, blue lily, sugarcane, noose, lotus, chakra, mace, paddy and pot of gems in his hands.

Vijaya Ganesha: He bestows success on his devotees. In this form, he is seen riding his mouse and the mouse is depicted larger than normal. He has four arms and in each arm, he holds a mango, noose, goad and broken tusk.

Nritya Ganesha: He is the happy dancer. He is seen dancing under the Kalpakavriksha and holds a goad, noose, modaka and broken tusk in his four hands.

Urdhva Ganesha: Urdhva means elevated. In this form, Lord Ganesha is sitting in a tantric posture with one of his shakthis on his thigh. He has six hands and each hand holds a lotus, paddy, sugarcane, an arrow, broken tusk and blue lily. 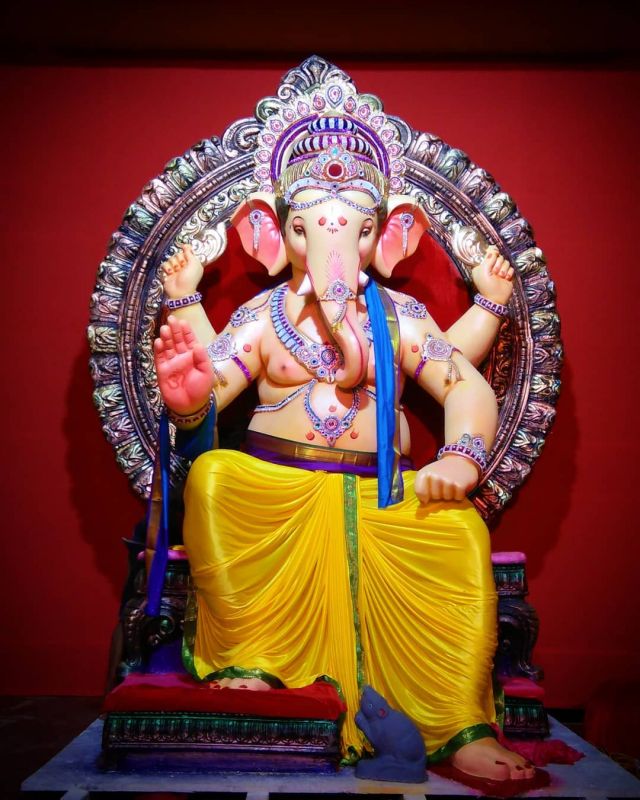 Ekakshara Ganesha: Ekakshara Ganesha is a three eyed, four armed form of Lord Ganesha. He is sitting in Padmasana pose on his vehicle, the rat. He holds a noose, goad a pomegranate in his hands and his one hand is showering blessings on devotees.

Varada Ganesha: Varada Ganesha is known to be the boon giver. One of his shakthis is sitting on his thighs. Like Lord Shiva, Varada Ganesha also has the third eye of wisdom and a crescent moon on his head. He holds a noose, goad, dish of honey in his hands and a pot of jewels in his trunk.

Kshipra prasada Ganesha: In this form, Ganesha grants your wishes quickly and punishes your mistakes even faster. This six armed Ganesha is often seen sitting on a grass throne. He holds noose, goad, lotus, pomegranate, broken tusk and a small branch of kalpakavriksha in his hands. 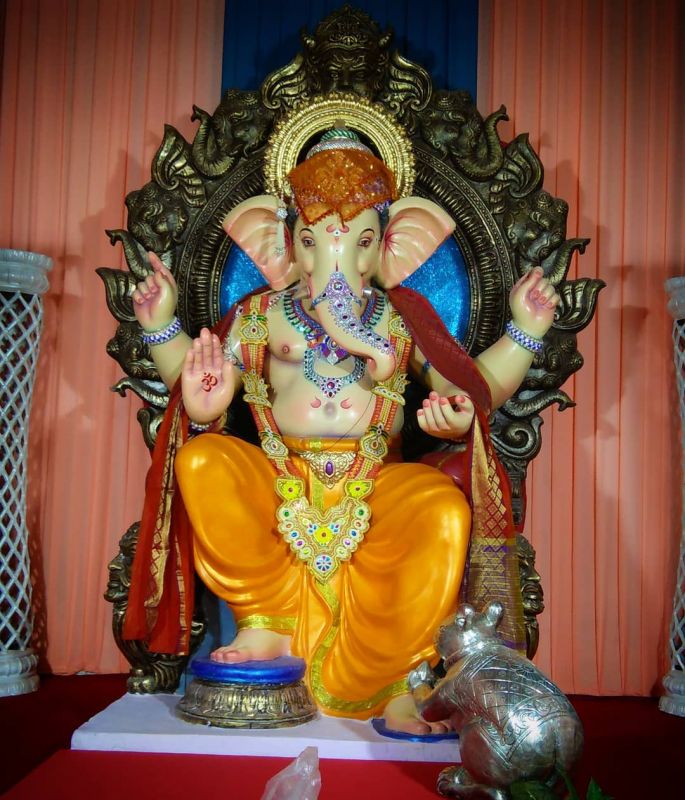 Haridra Ganesha: This calm faced form of Lord Ganesha appears seated on a royal throne. In his four hands, he holds broken tusk, modaka, noose and a goad. In this form, he is also seen wearing a bright golden gown-like vestment.

Shristi Ganesha: Shristi Ganesha is the happy Ganesha. His red color and looks in this form has the makings of an active Lord Ganesha. He has noose, goad, mango and broken tusk in his four hands.

Uddanda Ganesha: He is the enforcer of justice. One of his shakthis is seated on Uddanda Ganesha’s thighs. However, this is an angry form of Ganesha. He holds a pot of gems, a blue lily, sugar cane, mace, lotus flower, sprig of paddy, pomegranate, noose, garland and his broken tusk in his ten hands. 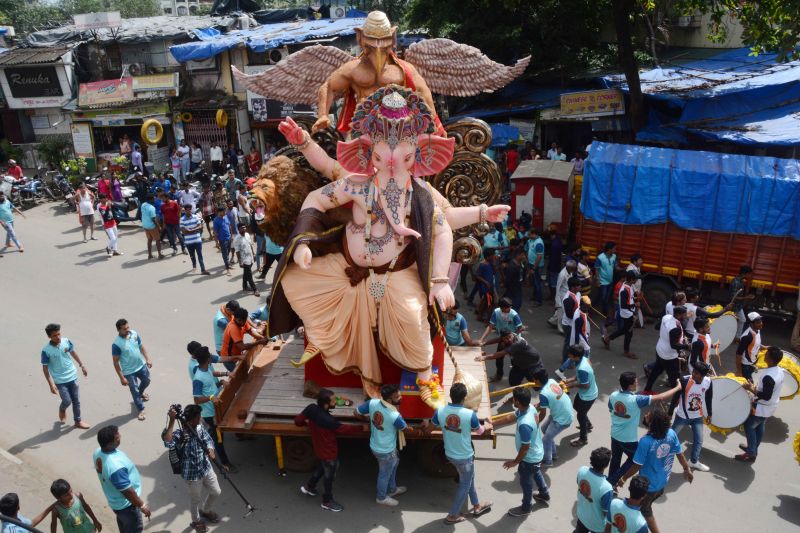 Dhuddhi Ganesha: Dhuddhi Ganesha makes the life of devotees clean and celebrated by passing on his spiritual views. Thereby helps them attain the sought after Moksha. In his four hands, he holds rudraksha, axe, broken tusk and a pot of precious gems.

Dwimukha Ganesha: Dwimukha Ganesha, as the name suggests, has two faces and can see in all directions. In his four hands, holds a noose to keep devotees close to him, a goad to encourage devotees on their way forward, broken tusk to represent self-sacrifice and a pot of jewels.

Trimukha Ganesha: Again, as the name says, Trimukha Ganesha has three faces. In this form, Ganesha is seen sitting on a golden lotus and has six hands. His hands are holding noose, goad, beads and a pot of nectar. With is other two hands, he gestures protection and blessings. 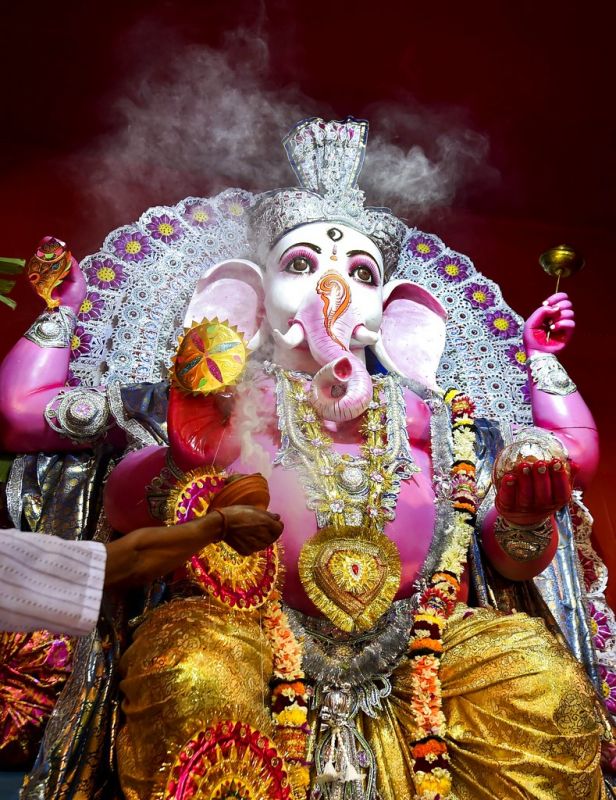 A priest offers prayers to Lord Ganesh at a community puja pandal on the occasion of Ganesh Chaturthi in Kolkata. (Photo: PTI)

Sinha Ganesha: Sinha Ganesha is the lord of strength and confidence. He rides on a lion and another roaring lion is seen in one of his eight hands. He also holds a kalpavriksha sprig, veena, a lotus, flower bouquet and a pot of jewels.

Yoga Ganesha: In this form, Lord Ganesha appears in the true form of a yogi. He has four hands and his legs are tied up in the yogic stance. His hands are holding yoga staff, sugar cane stalk, a noose and prayer beads.

Durga Ganesha: This form of Lord Ganesha is invincible. He is mighty and always victorious over darkness. In his eight hands, he is holding bow, arrow, noose, goad, prayer beads, broken tusk and a rose apple.