Moon’s waxing and waning is a metaphor for the ebb and flow of our lives. 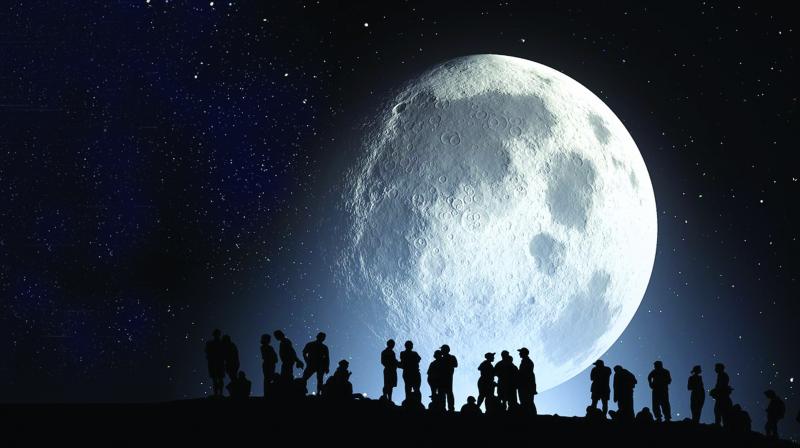 The moon represents feminine energy and runs through a cycle of waxing and waning that spans over 29.5 days.

The moon has always been an object of curiosity for human beings and has many stories around it. This celestial body is also a source of great energy and has many spiritual connotations.

The moon has always been an object of wonder for children, an inspiration for poets and a destination of dreams for astronauts and space scientists. But all this is merely romanticising and skimming the surface of an astronomical body and distant satellite of the earth without fathoming its spiritual and mystical energies.

The moon represents feminine energy and runs through a cycle of waxing and waning that spans over 29.5 days. Starting with the new moon and then growing to the Quarter moon and Gibbous moon; it reaches its luminous peak on the day of the Full moon. This is followed by the waning phase.

Living in tune with the moon’s cycle can help us tap into its energies. Calendars like the Islamic calendar follow the moon.

The new moon is the time to set intentions, begin new projects, spell out goals and focus one’s mind, body and spirit on them.

The full moon is the time for sealing one’s intentions and tapping into one’s intuition. During the full moon there is a great deal of energy that is released. But we must remember that whatever  emotion we are feeling is likely to get amplified. For instance, if we are happy then  chances are that we will feel happier and if we are angry we are bound to feel angrier. So, it can either increase your positive energies or play havoc with your emotions. Staying in a calm frame of mind is the best thing to do during a full moon.

The waning period of the moon is for forgiveness, letting go of negativities, unwanted emotions and thoughts.

Phases of the moon are also believed to escalate certain health conditions — mainly  mental (Luna incidentally is the Goddess of the moon and lunatic translates roughly to   moon sick) or critical illnesses. The moon has a bearing on oceans, tides, moods, rhythms and even crops. The Hawaiian moon calendar gives specific directions as to which plants are best suited for planting during specific phases of the moon.

The moon’s waxing and waning is in a sense a metaphor for the ebb and flow of our lives. Also it is important to note that the moon does not generate any light on its own but only reflects the light of the sun. The receiving and reflecting of light is symbolic of many things — the student receiving knowledge from a guru, the rivers feeding the seas, the earth receiving the seeds planted by farmers and allowing them to sprout and grow.

It is a good idea to do some moon bathing on a full moon or have moonlit dinners. Placing your crystals and altar objects under the moonlight can energise them. Pilgrims who circumambulate the sacred hill temple of Tiruvannamalai consider it special to perform this ritual on a full moon day as it is said that the rays of the full moon falling on the medicinal plants on the hill have a beneficial effect.

The moon is always the same. Since it orbits around the Earth, we see it differently during various phases. During new moon the moon is roughly between the Earth and the Sun. Therefore, the Sun is shining on the other side of the moon i.e. the side we do not see. Hence, we cannot see the moon at that time as the side which faces the earth is not illuminated.

There is a mythological story that tells us that in the days before waxing and waning, the moon laughed at Ganesha — the elephant headed God — who once had his fill of sweets and stumbled and fell while walking  with more goodies in hand.  An angry Ganesha cursed the moon and pronounced that the moon will disappear from the earth from then on. After much pleading he lessened the curse leading to the waxing and waning.

In sum, attune yourself to the moon and activate her inner powers.

The writer is a Reiki channel, yoga practitioner and a spiritual seeker