How "zombie fungus" takes over ants, controls their behaviour

Almost like a puppeteer pulls the strings to make a marionette move, the fungus controls the ant's muscles. 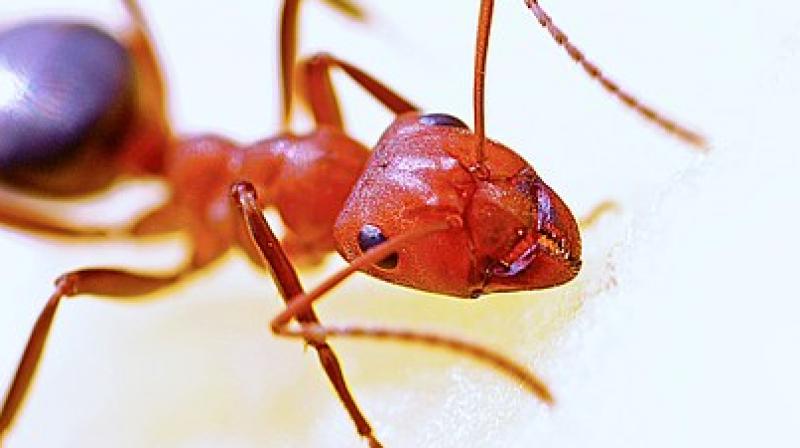 Almost like a puppeteer pulls the strings to make a marionette move, the fungus controls the ant's muscles. (Photo: Pixabay)

Scientists have found a "zombie ant fungus" that invades the body of an ant and is able to control its behaviour through its muscles without infecting the insect's brain.

The parasite controls the behaviour of carpenter ant workers, compelling them to climb vegetation and bite into the underside of leaves or twigs, where they die.

As the fungus grows in the ant cadaver, it produces a stalk that protrudes from the ant's head and discharges infectious spores onto the ground below, where they can infect other foraging ants.

"To better understand how such microbial parasites control animal behaviour, we looked at cell-level interactions between the parasite and its carpenter-ant host at a crucial moment in the parasite's lifecycle - when the manipulated host fixes itself permanently to vegetation by its mandibles," said Maridel Fredericksen, former student at Pennsylvania State University in the US.

"The fungus is known to secrete tissue-specific metabolites and cause changes in host gene expression as well as atrophy in the mandible muscles of its ant host," said Fredericksen, now at the University of Basel in Switzerland.

Researchers infected ants with either O unilateralis SL or with a fungal pathogen, Beauveria bassiana, to distinguish between effects that are common to pathogenic fungi from those that are specific to O unilateralis SL.

They took slices of tissue at 50 nanometres and captured images of each slice, using a machine that could repeat that process 2,000 times over a 24-hour period.

The results, published in the journal PNAS, showed that O unilateralis SL cells were present throughout virtually all regions of the host ants' bodies, including in the head, thorax, abdomen and legs.

In addition, a large proportion of these fungal cells were connected, suggesting that they form a network to control the host's behaviour collectively.

"Normally in animals, behaviour is controlled by the brain sending signals to the muscles, but our results suggest that the parasite is controlling host behaviour peripherally," said David Hughes, associate professor at Penn State.

"Almost like a puppeteer pulls the strings to make a marionette move, the fungus controls the ant's muscles to manipulate the host's legs and mandibles," Hughes said.

"We hypothesise that the fungus may be preserving the brain so the host can survive until it performs its final biting behaviour - that critical moment for fungal reproduction," he added.